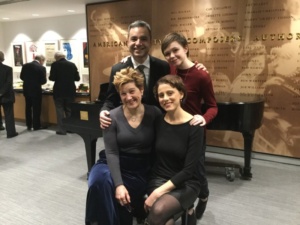 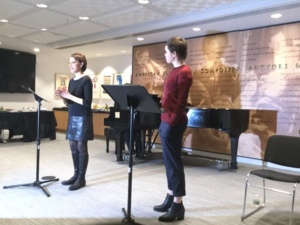 Judy Kuhn (Fun Home, Fiddler on the Roof) and Emily Skeggs (Fun Home), were on hand to showcase Lisa’s work and the song “Days by Days.” See the performance on the video. 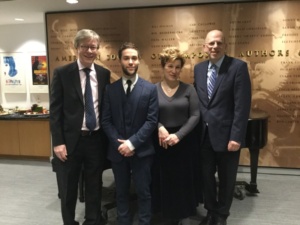 The Kleban Foundation was established in 1988 under the will of Edward L. Kleban, best known as the Tony and Pulitzer Prize winning lyricist of the musical A Chorus Line. Kleban’s will made provisions for two annual prizes, which in recent years have totaled $100,000 each, payable over two years, to be given to the most promising lyricist and librettist in American Musical Theatre. For 27 years, The Kleban Prize, which has recognized and honored some of the American musical theatre’s brightest developing talents, is unique in that it is bestowed not just for an artist’s previous achievements, but for the promise of creativity to come. Over the past 27 years, the annual Kleban Prize for Musical Theatre has awarded approximately $5,000,000 to 63 artists who collectively have garnered four Tony Awards (with nearly 30 Tony nominations), 59 Emmy Awards, three Grammy Awards, 10 Drama Desk Awards, nine Outer Critic Circle Awards, four Obie Awards, two Olivier Awards, and two Pulitzer Prizes. The list of previous Kleban Prize winners includes Robert L. Freedman and Steven Lutvak (A Gentleman’s Guide To Love and Murder), David Lindsay-Abaire (Shrek), Jason Robert Brown (Parade, The Last Five Years), John Bucchino (A Catered Affair, It’s Only Life), Gretchen Cryer (I’m Getting My Act Together and Taking It On the Road, The Last Sweet Days of Isaac), Michael Korie (Grey Gardens, Happiness), Jeff Marx and Robert Lopez (Avenue Q), Michael John LaChiusa (Giant, See What I Wanna See, The Wild Party), Glenn Slater (The Little Mermaid) and John Weidman (Pacific Overtures, Road Show, Assassins). For a complete listing of the last 27 years of Kleban Prize winners, see the list at the end of this document. The Kleban Foundation Board of Directors: André Bishop, Elliot H. Brown, Sheldon Harnick, Richard Maltby, Jr., Richard Terrano, John Weidman and Maury Yeston.