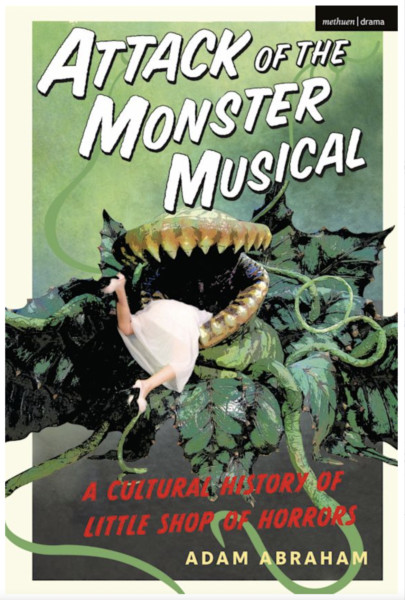 The Lambs has an extra author talk this month! By special arrangement. Adam Abraham is the author of a book about Little Shop of Horrors, one of the most-beloved musicals of all time is out just in time for its 40th anniversary. Join The Lambs, 3 W. 51st St. 5th Floor on Wednesday, Sept. 28, 6:00 p.m. with the author with two of the original cast members Franc Luz (the original Dr. Orin Scrivello, DDS) and Sheila Kay Davis (the original Ronnette) in attendance. Make your reservations here. Space is limited.How many hit musicals are based on films that were shot in two days at a budget of $30,000? The answer is one: Little Shop of Horrors. Roger Corman’s monster movie opened in 1960, played the midnight circuit, and then disappeared from view. Two decades later, Little Shop of Horrors opened Off-Broadway and became a surprise success.Attack of the Monster Musical: A Cultural History of Little Shop of Horrors chronicles this unlikely phenomenon. The Faustian tale of Seymour and his man-eating plant transcended its humble origins to become a global phenomenon, launching a popular film adaptation and productions all around the world. This timely and authoritative book by Adam Abraham looks at the creation of the musical and its place in the contemporary musical theatre canon. Examining its afterlives and wider cultural context, the book asks the question why this unlikely combination of blood, annihilation, and catchy tunes has resonated with audiences from the 1980s to the present.At the core of this in-depth study is the collaboration between the show’s creators, Howard Ashman and Alan Menken. Told through archival research and eyewitness accounts, this is the first book to make extensive use of Ashman’s personal papers, offering a unique and inspiring study of one of musical theatre’s greatest talents.

Adam Abraham is the author of When Magoo Flew: The Rise and Fall of Animation Studio UPA and Plagiarizing the Victorian Novel: Imitation, Parody, Aftertext. He has also written for film, television, and theatre. Now a Visiting Assistant Professor at Cornell College, he previously taught at Auburn University, Virginia Commonwealth University, New York University, and Oxford.

Honorary Lamb Foster Hirsch, a professor of film at Brooklyn College and the author of 16 books on film and theater, including The Dark Side of the Screen: Film Noir, A Method to Their Madness: The History of the Actors Studio, and Kurt Weill on Stage: From Berlin to Broadway.

The Collie is Magda KatzThe book will be available for purchase $25. Get it signed by the author and cast.

If you are staying for dinner, please RSVP with 3 West Catering. For drinks only you do not need to RSVP.