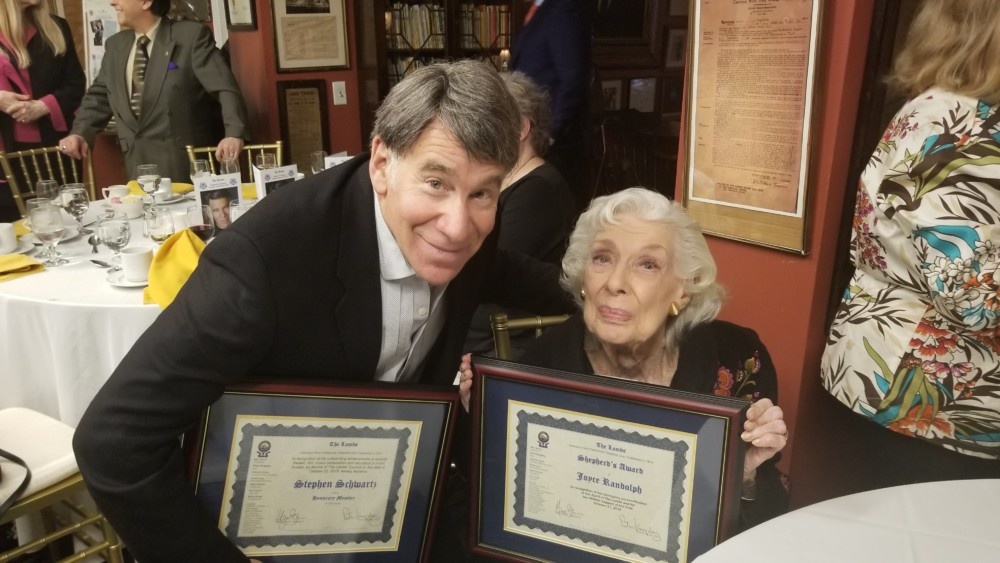 Stephen, known for writing hit musicals as Godspell, Pippin and Wicked, has been awarded four Grammy Awards, three Academy Awards, a Drama Desk, the 2015 Isabelle Stevenson Award, a special Tony Award for his commitment to serving artists and new talent. Stephen has led Musical Theater Workshops for the ASCAP Foundation  for over 25 years, and The Lambs Foundation recently become a supporter of his workshops.

Interviewed by Michael Kerker, Vice President of Musical Theater at ASCAP, as Stephen candidly spoke about his work, his process and musical theater. The full audience was pleasantly surprised when Stephen hit the piano and performed a song form his new show, The Prince of Egypt, was opens in London in February 2020. After the talk, Shepherd Marc Baron awarded Mr. Schwartz Honorary Membership status of The Lambs “in recognition for his outstanding achievements in musical theater, film, music composition and education in music theater” as decreed by The Lambs’ Council.

Adding to the afternoon festivity was the celebration of the 95th birthday of Lamb Joyce Randolph, best known as Trixie of The Honeymooners. Joyce’s late husband, Richard Charles, was Shepherd 1986-1997. Mr. Schwartz played “Happy Birthday” as the room arose in song.

Lambs have been involved in the formation of The Actors’ Fund of America, Actors’ Equity, Paramount Pictures, Screen Actors Guild and, most recently, in the merger that created SAG-AFTRA. ASCAP was founded in 1914 within The Lambs, six of the nine ASCAP founders were Lambs. The ASCAP Foundation was founded in 1974 by Lamb Jack Norworth.

Suzanna BowlingJanuary 19, 2023
Read More
Scroll for more
Tap
#HAM4HAM Fan Performance Lottery Tickets For $10 Each for October 31
He Says: Forbidden Broadway: The Next Generation Sparkles Like a Fake Diamond that Ain’t Too Proud to be Rude and Witty