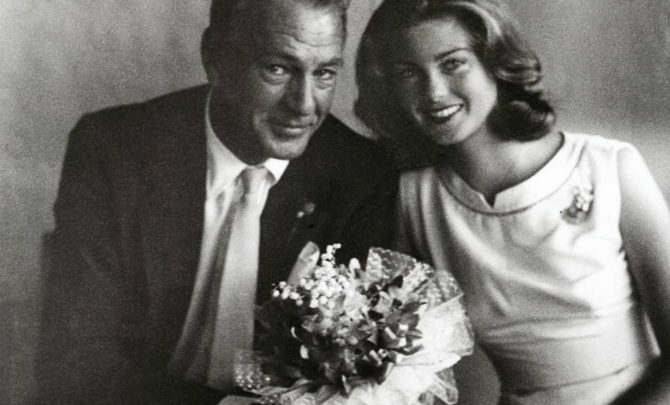 Gary Cooper and her daughter Maria

On November 17trth, 7:00 PM Maria Cooper Janis talks about her legendary father Gary Cooper. Gary Cooper won the Academy Award for Best Actor for Sergeant York and High Noon. He was also nominations for Mr. Deeds Goes to Town, The Pride of the Yankees and Along Came Jones. In 1961 Cooper received an Academy Honorary Award for his career achievement. He was one of the top 10 film personalities for 23 consecutive years, and one of the top money-making stars for 18 years. The American Film Institute (AFI) ranked Cooper at No. 11 on its list of the 25 greatest male stars of classic Hollywood cinema.

Maria Cooper Janis was born in Los Angeles, California and lived there with her parents, Gary Cooper and his wife Veronica Cooper. She had a painting career in New York and in 1966 married the world renowned concert pianist, Byron Janis. Although Mr. Janis’ busy schedule has led them all over the world, Mrs. Janis has enjoyed a successful career as an artist. She pursues her paintings with great energy, exhibiting in the United States as well as Europe and Asia. Maria Cooper Janis is involved with the American Arthritis Foundation of which her husband, Byron Janis, is the National Spokesperson, and she sits on the board of Pro Musicis, an organization committed to furthering the careers of young musicians.Maria has collaborated on three television specials, one produced by TNT Gary Cooper, American Life, American Legend, another, part of TNT’s Biography Series entitled The Life and Times of Gary Cooper and she has worked with A&E to contribute to a special on her father for their Biography program titled, Gary Cooper: The Face of a Hero which was aired in March of 1998. She has collaborated abroad with a PBS/French production of Frederick Chopin: A Voyage with Byron Janis. Mrs. Janis frequently lectures around the country on such topics as, “Growing Up in Hollywood” often with her longtime friend Joan Benny.She has written a book Gary Cooper off Camera: A Daughter Rememberswhich gives an inside look into the persona of one of the greatest movie stars of all time. She has collaborated with author Bruce Boyer on Gary Cooper Enduring Style, published in November of 2011 by PowerHouse Books with an introduction by Ralph Lauren.Maria Cooper Janis has been working on a feature film documentary, “The True Gen,” about the special 20-year friendship between Gary Cooper and Ernest Hemingway, the score of which is composed by Byron Janis. She has just finished work as a consultant on the PBS documentary produced by Peter Rosen, The Byron Janis Story, about the life of Byron Janis which is currently being aired nationally and contributed to his new autobiography, Chopin and Beyond: My Extraordinary Life in Music and the Paranormal.

Byron Janis, Maria’s husband, is an internationally renowned pianist. He mad his orchestral debut at 15 with Toscanini’s NBC Symphony Orchestra, and at 17 made his debut at Carnegie Hall. He has composed the score for a major musical production of “The Hunchback of Notre Dame” and has written the score for The True Gen, a feature documentary on the 20-year friendship between Gary Cooper and Ernest Hemingway.  Our interviewer is Lamb Foster Hirsch, a noted film
historian,  author of 16 books on film, and professor of film at Brooklyn College.

You can join the Zoom Meeting via computer, tablet or smartphone:
https://us02web.zoom.us/j/85987032521?pwd=Y3ZyMUxWSUpPZVU0ODJvYnA0eTB1QT09