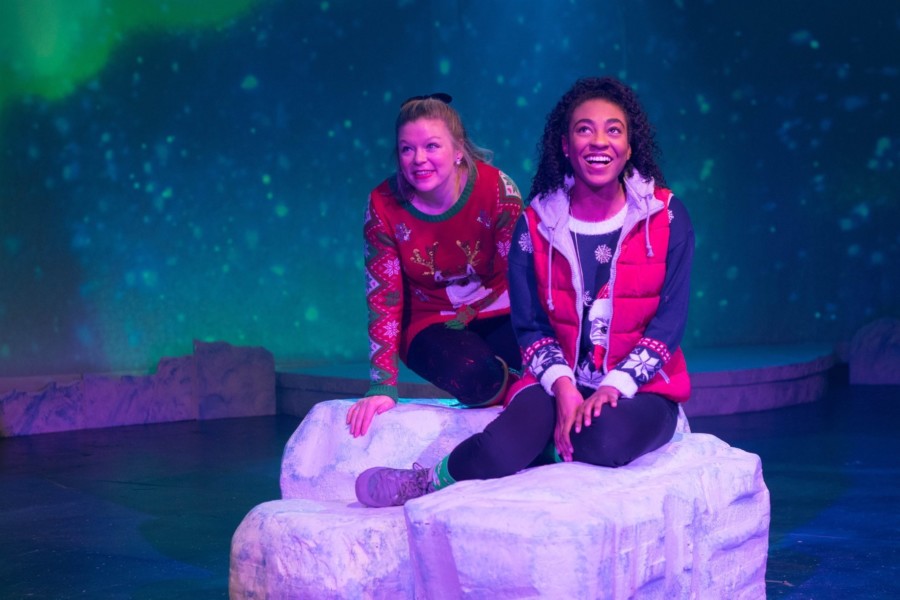 Added to the plethora of holiday themed entrainment options, one where the ladies drive the action, is making its debut at the Greenhouse Theater for an inaugural run. The Land of Forgotten Toys The Musical showcases a trio of female performers driving all of the action. Director Nicolas Reinhart and musical director, Stephen Coakley, taking CPA Theatricals mantra to “develop musicals that respond to the dearth of theatrical opportunities for female performers” to heart. With a book and lyrics by Jaclyn and Jennifer Enchin and Mike Ross and a dozen original songs by Dylan MarcAurele, it’s the girls who have all the fun in this piece.

Set in a Wisconsin toy store in She-TOY-Gan, two teenaged store clerks, Grace (Bre Jacobs) and Nikki (Mary-Margaret Roberts) aspire for more. Grace is a second generation, young woman trapped in her ordinary existence, willed to take over her parent’s toy store when she turns 18, but desperate to break free from her destiny, hopeful to head to college for more. Nikki’s goals are more immediate, she just wants it to be Christmas. Both are put in immediate trouble when their store experiences a shortage of the hotly desired Queen of the Northern Sky (Katie Reid) collectible dolls. This Queen’s primary responsibilities are to collect all the broken and abandoned toys and bring them to the aforementioned land for repair. Standing in her way, the Scrooge-like store owner, Charlotte and Cruella DeVil inspired villainous Charlotta, both portrayed with real gusto by Liz Norton. Turns out Charlotta is jealous and envious of Santa (Randolph Johnson) so she locks him up in a candy cane prison cell with no hopes of rescue. That is until our two fair heroines wish on a necklace with a special, magical gem that transports them to The Land of Forgotten Toys.

Jacobs shines brightest, her vocals beautifully wrapped around the signature ballads of the piece.  “Far Away from here” has more than a few similarities to the classic “Somewhere Over The Rainbow” from The Wizard of Oz. While her Grace races to save Santa, Nikki is a little more one note, catching the eye of the Handyman Elf, Schmedrick (Quinn Kelch) and falling in love. Before they can put a bow on it, she must first assemble the avengers of misfit toys as backup. This terrific troupe of lost and forgotten toys to the rescue included Kar-A-Oke the Boom Box  (Brittney Brown), an overheating Fun Oven Supreme (Cathy Reyes McNamara) with smoking chimney (Christina Leinicke’s costumes charm while stretching a razor thin costume budget as far as she could), Barbra Doll with Kung Fu Action (Evelyn Crane), gruff Taxi Transformer (Lucas Crossman), an Old Trivia Game (Josh Bishop) and a hand held videogame, Game Dude (Jabari Thurman) with an electrical short up his sleeve. Can friendship and teamwork rescue Santa and save Christmas? What do you think?

Aimed at tween-aged girls, this Land is all heart and charm, although it still feels like an unfinished piece in need of a little editing and tweaking if it wants to join the lexicon of annual Windy City holiday shows. With that said, Land does show great promise. The 11th hour final song “There Is Always A Light” is a hopeful power ballad of self-esteem and self-actualization, empowering the leads as well as the audience members they worked hard to impress. Equally impressive, Kevan Loney’s projection design and G. “Max”Maxin IV lighting design, far more impressive than needed to be for the current staging. As for laughs, Elf 1 and 2 (Joe Scott and Maya Keane) were two adorable little kids as well as the villain’s primary henchmen. These two tots both had amazing comedic timing, stealing scenes each time they crossed the stage. This 90-minute musical may not fly by, but it has promise and potential, and is well on its way.

The Land of Forgotten Toys The Musical is currently playing at the Greenhouse Theater Center through December 29, 2019

Suzanna BowlingMay 26, 2022
Read More
Scroll for more
Tap
The Morality of Judgement Day or The Agility of Moving Vast Amounts of Sets To and Fro
The Ruffians’ Burning Bluebeard – A Darker Holiday Fable