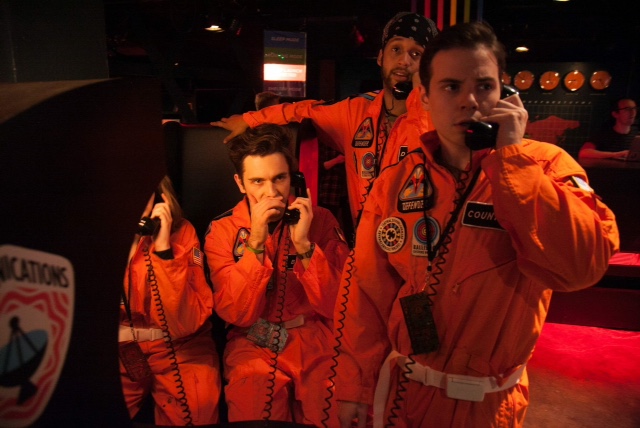 The Last Defender – Saving the World Has Never Been More Fun

The Last Defender – Saving the World Has Never Been More Fun 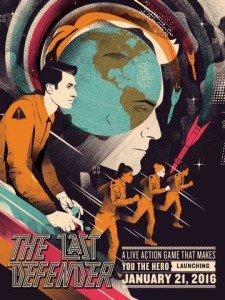 While I was participating in the Chopin’s Theatres newest interactive showcase, The Last Defender, REM’s classic alternative hit, “It’s the end of the world as we know it, and I feel fine” kept resonating though my head. A highly imaginative, 90-minute, anxiety-ridden thrill ride, Defender allows YOU to be your own Avenger, free of the influence of Iron Man, Thor, Vision or Captain America. Well, maybe not Captain America. You are, after all, your own Greatest American Hero, joining a team of 16 others in an attempt to stop a nuclear attack launched on the United States. The brain child of a trio of talents, writer and director Nathan Allen, puzzle designer Sandor Weisz and art director Chris Burnham, The Last Defender takes you back to the Reagan inspired time, the Cold War of the mid 1980’s, an era where the sense of paranoia and fear of nuclear annihilation was a very real and imminent threat.  The audience converts into the action in this distinctive, team building, storytelling experience. 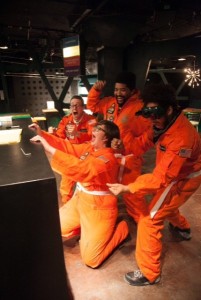 Unique to The Last Defender, individual audience members are not seated, passive spectators. Selectively guided by masked, yet silent, stagehands and brief video clips, each member of the audience became an integral part to the salvation, or destruction, of the world.  No small task.  Set exclusively in the underground bunker of The Defenders, and assigned clever code names and matching orange jumpsuits, the environment quickly becomes chaotic when missiles are launched from both the United States and the Soviet Union. Mired by the midst of the Cold War, there are three possible outcomes to the show; Nuclear War, Nuclear Peace, and a compromise scenario for teams who fail to reach Nuclear Pace but wish to avoid Nuclear War. No pressure, huh?  The set reminded me of those late 1970’s Saturday morning shows like Ark II and Jason of Star Command.  Artificial Intelligence has been deployed, alongside 8 bit arcade-style computer technologies, fog machines, projection screens and periscope viewers, as the missiles inch closer to their targets. “Kansas, Washington DC, Chicago” all echo over the loudspeakers as the race against the clock ensues. Each member of the team worked together to solve brain-teasing problems in order to gain control over all of the individual nuclear weapons. As Defenders, players navigate through Sander Weisz’s elaborate and clever puzzles, as well as their own paranoia, to unlock clues and codes to thwart the threat of impending doom. 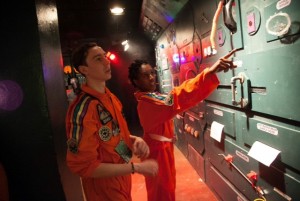 Part performance, part puzzle hunt and part live action game, I found The Last Defender experience engaging, inspired and visionary. The perfect addition to the distinctive conclave of highly original shows regularly produced at the Chopin. Played in real time, it was up to each member of the audience to play their essential part and (hopefully) save the world.  I promised I would not spoil any of the specific surprises of the individual puzzles. Best experienced live, as though you are in the actual world of a video game instead of sitting zombified on a couch, controller in hand. As for my team of 16, that Saturday matinee group of strangers, quickly morphed into an elite group of technicians and would be experts, holding the fate of the world in our hands. Did we save the world? Well, let’s just say with 5 more minutes, we would have successfully solved it all. Regrettably, in our race against the clock, the clock won. 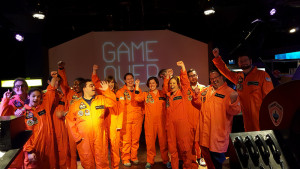 Live action has never been so entertaining. Repeatedly extended due to high demand for tickets and small audience space, this concept would make an excellent team building exercise for an office staff, a wonderful outing for a birthday party, or simply a fun and unique experience with friends. The afternoon I attended, I didn’t know any of the other players, yet once the action commended, we all fell immediately into our roles. At times, tempers flared as the pressure mounted. The game was intentionally designed to create that tense and cursory environment, however, at the end, we all posed, triumphantly, for a group portrait. Perhaps the exuberant looks on our faces, as the world had just crashed and burned beneath our watch, was untimely, however as we were collectively removing our orange jumpsuits at the shows end, strangers were engaged in conversation about how we could have honed our talents for a better conclusion. That is the game, “it’s the end of the world as we know it, and I feel fine.”

The Last Defender is currently playing at the Chopin Theatre through July 17, 2016