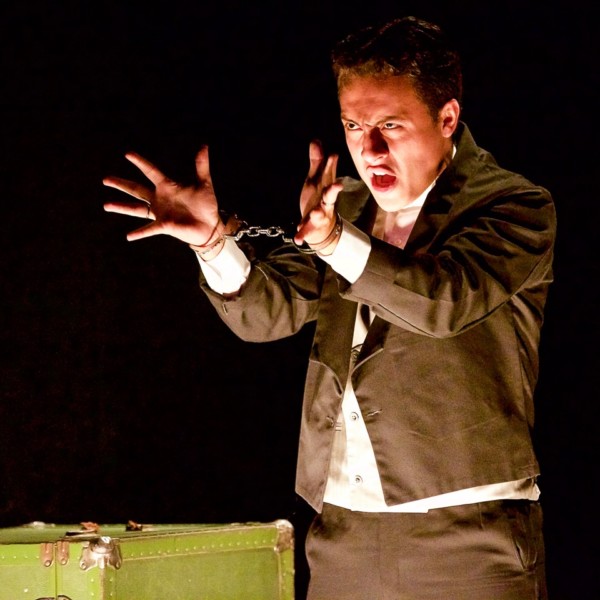 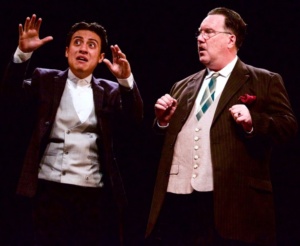 If you love Harry Houdini and Sir Arthur Conan Doyle, you will love Jennifer Berman’s new play The Last Séance part of the NY Summerfest at the Hudson Guild Theater. This well thought out play, follows two of the biggest celebrities of their age, starting with their first meeting. Doyle, the famed creator of the great detective Sherlock Holmes, and Houdini, the illusionist and escape artist who became one of the world’s highest-paid entertainers were from vastly different backgrounds. Doyle (Jim Haines) was a well educated Brit and a Catholic, Houdini (Justin Chevalier) a self-educated Jewish Hungarian immigrant. Brought together by a shared interest in spiritualism, it was also spiritualism that destroyed this unlikely friendship. Doyle embraces the ability to contact and talk to the dead, Houdini was an anti-Spiritualist crusader. When Doyle’s wife, Jean (Isabel Schnall), becomes a self-proclaimed medium using automatic writing and attempts to contact Houdini’s mother, cracks in the men’s relationship begin to appear. When Houdini publically denounced mediums, including Doyle’s wife, their relationship brakes down. After Houdini’s death, his widow, Bess (Megan Ghorashy), hoped that her husband might make contact and give her message using a prearranged code, but he never does. 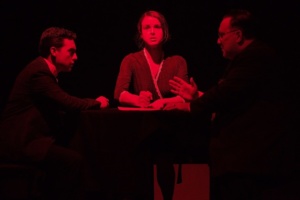 Justin Chevalier, as Houdini is a find. He understands the difference between the showman and the man. His performance is layered and intelligent. Jim Haines, as Doyle, doesn’t connect as strongly, but grows in his performance. Isabel Schnall and Megan Ghorashy play multiple roles and succeed in making each one unique and different. Only Michael Fidalgo who plays multiple characters doesn’t bring the magic.

Director Andrew Glant-Linden, does a excellent job in keeping the play moving and engaging. A huge shout out goes to Patrick Bakalli for his production design, which is outstanding.

Jennifer Berman has done a wonderful job at bringing history to life. There is a huge call for shows based on these two men and she has a winner. Though she has not given herself credit Ms. Berman has done a fabulous job at costuming the show. For a show of this kind, all elements need to come together and I am going to predict this show has a life beyond this festival.

Suzanna BowlingJuly 31, 2022
Read More
Scroll for more
Tap
She Says: The Guilt Of A Child Leads to Hell
The Stars Come Out For Rose: Kate Hudson, Uma Thurman, Fergie and More