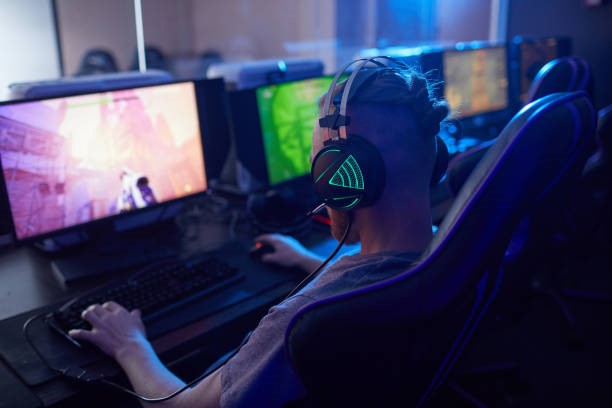 The gaming industry experienced significant developments and technological advances in 2022. Gaming has advanced much since the period of two-dimensional gaming retro. No longer do people play PacMan in arcades. The evolution of gaming technology has enabled gamers to play slots online and enjoy more immersive visuals and interactive gameplay choices.

These advancements are more obvious than ever in 2022. A new age of gaming is dawning as virtual reality technology takes the lead in the race for digitalization. But let’s not get ahead of ourselves; here are some of the latest gaming technologies for the ultimate video gaming experience.

This is one of the latest and most rapidly expanding parts of gaming. By the end of 2021, its worth on the global market is around $1.1 billion. If you don’t use live streaming, your gaming market may decline significantly.

The bottleneck caused by obsolete hardware has been a stumbling block in the gaming industry for the last few years. Users discover that their PCs from only a few years ago are failing to keep up with the increasingly imposed requirements.

Consequently, consumers would have to periodically update their PC components. Certain games were unusable on laptops until the user upgraded to a more powerful model.

Cloud-based gaming services are an exciting innovation in the gaming technology industry. The way they work is that a user may play the game of their choice via the cloud without having the required gear available. Instead of operating the game locally on their PC or laptop, the player plays the game through a server farm that streams real-time video of the game.

Even though cloud-based gaming solutions have been around for some time, they have one obvious issue: latency. However, with recent improvements in internet connections and the deployment of 5G technology, cloud-based gaming services are more practical than ever.

The adoption of virtual reality (VR) video games has steadily expanded over the last five years. In addition, developers are incorporating improved virtual reality technology into smartphones and wearable games. As a result, the distinction between experiences becomes blurry.

Also being introduced are in-game concerts, special events, and digital merchandise. Cloud VR may become possible soon. In addition, the size of the headset may be reduced further.

Many of the largest game developers, like Square Enix and Ubisoft, intend to include non-fungible tokens (NFTs) in their games so that players could win, earn, and trade unique in-game things. In 2022, it is anticipated that some of these plans will begin to materialize.

The concept is not well-liked by all players, particularly as many see these tokens as a waste of energy. This is owing to the substantial computing power needed to execute the blockchain algorithms necessary for their operation.

With game publishers declaring a positive outlook for the convergence of gaming and NFTs and a clear readiness to invest money to make it a reality, the convergence is likely to become a reality. The proliferation of “play-to-earn” games that reward players with cryptocurrencies for playing in daily games is another latest technological trend in video gaming.

In the past several years, the efficiency and power of graphics processing units have increased dramatically. Never before have gaming screens had greater resolutions and reduced latency. As a consequence, games have become more realistic.

As years pass and technology advances, graphics tend to improve on their own. Today, these innovations are far more accessible to the common customer. The price of 4k gaming is cheaper than it has ever been, and we have processors with enough power to justify playing some games at that resolution.

Video games have gone a long way in 2022, with advancements in their graphic performance and the ability to use avatars to access the Meta World. Despite these developments, all games are ultimately composed of code at their core.