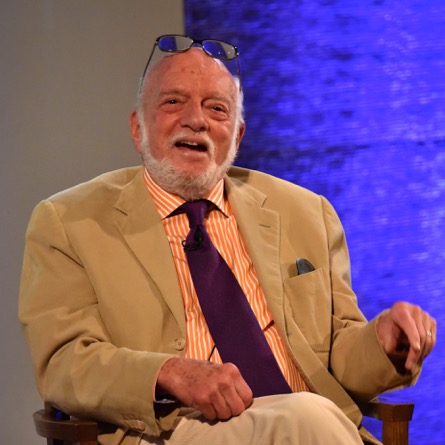 The Legendary Hal Prince is in The House

The Legendary Hal Prince is in The House 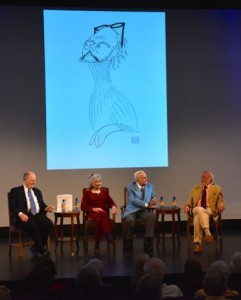 With The Prince of Broadway, making news, director-producer Harold Prince (Cabaret, The Phantom of the Opera, Kiss of the Spider Woman, Sweeney Todd), talking at The New-York Historical Society presented Memories of Al Hirschfeld, a special event was indeed special. The Prince of Broadway is Mr. Princes autobiographical musical set to have its world premiere at Japan’s Theatre Orb in Tokyo Oct. 23. The show will star Shuler Hensley (Oklahoma!), Ramin Karimloo (Les Misérables), Nancy Opel (Urinetown), Reon Yuzuki (Takarazuka Revue) and Kaley Ann Voorhees.  The Prince of Broadway will be directed by Prince, co-directed and choreographed by five-time Tony Award winner Susan Stroman (Big Fish, The Producers), and features a book by Tony Award nominee David Thompson (The Scottsboro Boys). 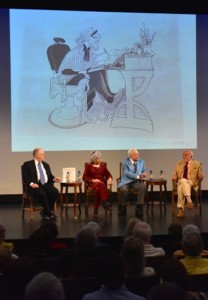 Last night at 6:30PM, The New-York Historical Society presented Memories of Al Hirschfeld, a special event featuring Al Hirschfeld Foundation President Louise Kerz Hirschfeld, Robert Osborne of The Hollywood Reporter and Turner Classic Movies, legendary Broadway producer and director Harold Prince, and Frank Rich of New York Magazine in discussion about the life and legacy of Al HIrschfeld through his art, career, and personal relationships.  This special Bernard And Irene Schwartz Distinguished Speakers Series event, was presented in conjunction with The New-York Historical Society’s current exhibition, The Hirschfeld Century: The Art of Al Hirschfeld, running through October 12, 2015.  Organized by Louise Kerz Hirschfeld and guest curated by David Leopold of the Al Hirschfeld Foundation, the exhibition is the most comprehensive to date, featuring more than 100 original drawings from the artist’s early work for Hollywood studios to his last drawings for The New York Times.  The exhibition features classic portraits of Charlie Chaplin, Carol Channing, Ella Fitzgerald, Jane Fonda and Ringo Starr, as well as cast drawings from such landmark productions as Fiddler on the Roof, West Side Story, and The Glass Menagerie. Also on view are selections from the artist’s sketchbooks, ephemera, and related videos.  Visitors to The Hirschfeld Century will explore the artist’s career chronologically, beginning with his pre-caricature days at Selznick Pictures in the early 1920s to his last works in theater, film, television, music and dance in 2002. A video showing Hirschfeld’s working process, from inception to completion, is also on view.  Among the highlights is a 1928 drawing for MGM depicting the fledgling comedy team Laurel and Hardy in a bed with a brightly colored blanket, ingeniously made from a collage of wallpaper samples. An image of actress Ruby Keeler from No, No Nanette (1971) captures the wild energy of the 60-year old actress in her comeback role, enthusiastically tap dancing with arms and legs a-blur. Portraits of more recent stage legends like Jerry Orbach (in 42nd Street, 1980) and Sandra Bernhard (in I’m Still Here… Damn It!, 1998) evoke their big personalities with sparing lines.

The special event also celebrates the new book The Hirschfeld Century: Portrait of an Artist and His Age, published by Alfred A. Knopf and available exclusively at The New-York Historical Society exhibition.  The new book will be available in bookstores around the country July 7. For the first time, the artist’s extraordinary eighty-two-year career will be revealed in more than 360 of his iconic black-and-white and color drawings, illustrations, and photographs.  Hirschfeld’s influences, his techniques, and his evolution from his earliest works to his last drawings, are all chronicled.  A sumptuous illustrated and ambitious book, The Hirschfeld Century gives us a portrait of an artist and his age in both text and images. The biographical text is by David Leopold, who, as archivist to the artist, worked side by side with him and has spent more than twenty years documenting the artist’s extraordinary output. Leopold chronicles Hirschfeld’s early career that had a quick start at age 17 in the publicity department at Goldwyn Pictures.  He was quickly promoted where he rose from errand boy to artist before moving to Universal Pictures, and landing a job as art director at Selznick Pictures in New York by the age of 18. Hirschfeld’s early doodles on the backs of theater programs in 1926 led to his work for the drama editors of the New York Herald Tribune (an association that lasted twenty years) before he received a telegram from The New York Times, in 1928, asking for a two-column drawing of Sir Harry Lauder, the Scottish vaudeville sensation. This historic assignment began the famous collaboration with The New York Times that lasted seventy-five years.