The Lehman Trilogy Comes To Broadway 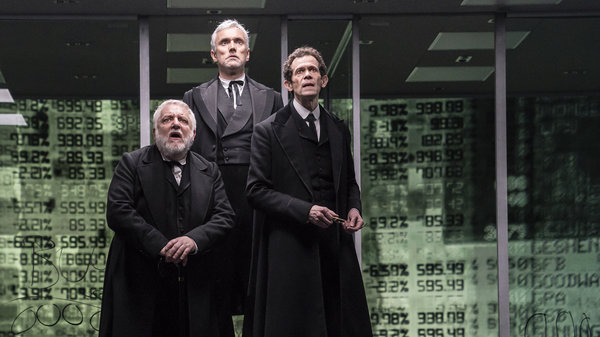 The Lehman Trilogy Comes To Broadway

The Lehman Trilogy was first commissioned by originating producer Neal Street Productions and developed and co-produced with the National Theatre at the Lyttelton Theatre in 2018, followed by an acclaimed SRO run at the Park Avenue Armory this past Spring, before returning to London for a 16 weeks sold-out run at the Piccadilly Theatre in the West End, May to August 2019.

Weaving together nearly two centuries of family history, this epic theatrical event charts the humble beginnings, outrageous successes, and devastating failure of the financial institution that would ultimately bring the global economy to its knees. The Lehman Trilogy, “a ticket worth selling your gilt-edged securities for” (New York Times), is the quintessential story of western capitalism, rendered through the lens of a single immigrant family. Simon Russell Beale, Adam Godley, and Ben Miles reprise their critically acclaimed portrayals of the Lehman Brothers, their sons, and grandsons, told in three parts presented as one evening in this“extraordinary theatrical experience” (The Daily Telegraph).

Messrs. Russell Beale, Godley, and Miles are appearing with the permission ofActors’ Equity Association. The producers gratefully acknowledge Actors’ EquityAssociation for its assistance to this production.

The Wall Street Journal is the media sponsor.

Suzanna BowlingDecember 23, 2020
Read More
Scroll for more
Tap
My View: The National Anthem Sung by Fiddler on the Roof in Yiddish in English
Raise a Glass to the 2019/20 Broadway Musical Opening Night Schedule