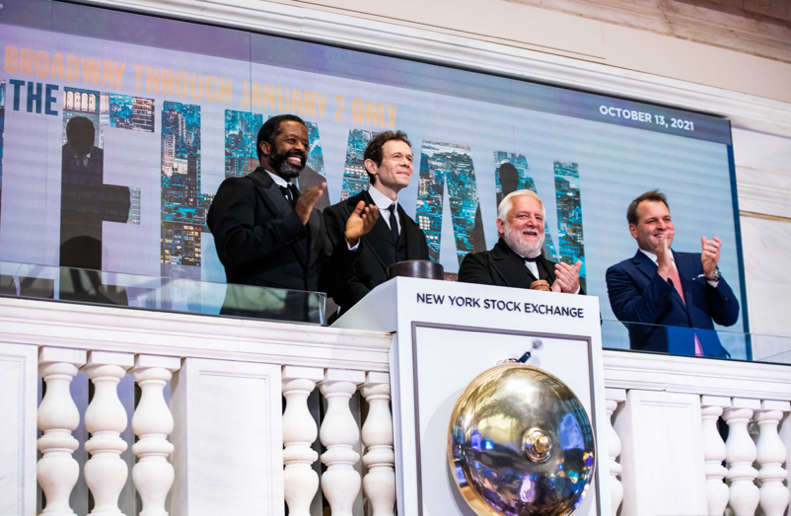 Weaving together nearly two centuries of family history, this epic theatrical event charts the humble beginnings, outrageous successes, and devastating failure of the financial institution that would ultimately bring the global economy to its knees. The Lehman Trilogy is the quintessential story of western capitalism, rendered through the lens of a single immigrant family. Simon Russell Beale and Adam Godley reprise their critically acclaimed portrayals of the Lehman brothers, their sons, and grandsons, told in three parts presented as one evening in this “extraordinary theatrical experience” (The Daily Telegraph). And the company welcomes the heralded Adrian Lester for this special Broadway engagement in his Broadway debut.

“Original Music from The Lehman Trilogy” is now available wherever digital music is sold and on BroadwayRecords.com. The CD of the album is available for pre-order on BroadwayRecords.com, as well as other major music retailers ahead of a release on October 22nd when it will also be available in for purchase in the theater. “Original Music from The Lehman Trilogy” includes a sweeping score from Nick Powell, which is featured in the production with Candida Caldicot performing the music live during each performance. To watch a video of Nick Powell (Composer & Sound Design) and Candida Caldicot (Music Direction) discuss the critically acclaimed score click HERE.

The Lehman Trilogy was first commissioned by originating producer Neal Street Productions and developed and co-produced with the National Theatre at the Lyttelton Theatre in 2018, followed by an acclaimed SRO run at the Park Avenue Armory in the Spring of 2019, before returning to London for a 16 week sold-out run at the Piccadilly Theatre in the West End, May to August 2019.

Genevieve Rafter KeddyJune 22, 2022
Read More
Scroll for more
Tap
T2c Talks to Marc Shaiman and Susie Mosher About The Rainbow Lullaby The World’s First LGBTQ Lullaby Album
Why I am running the Marathon for Broadway Cares