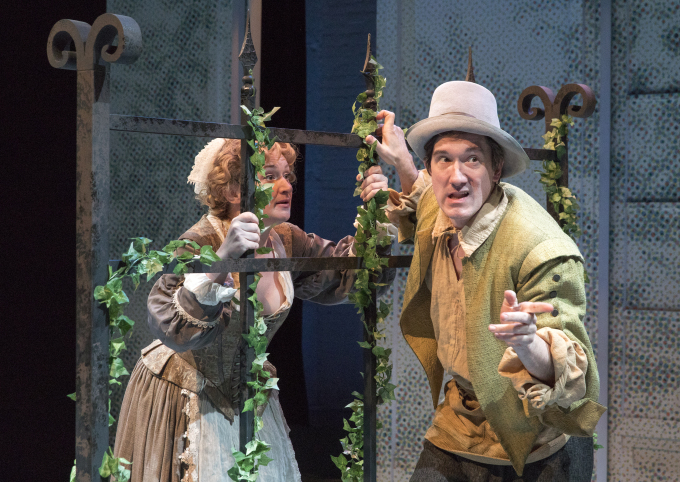 The Liar: An Un-Warranted Knee Jerk Reaction to Rhymes

The Liar: An Un-Warranted Knee Jerk Reaction to Rhymes 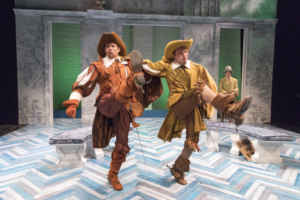 It seemed fitting that after a long day at the Women’s March NYC on Saturday, and the day after the Inauguration, I would find myself at the Classic Stage Company’s production of The Liar. The name says it all, but luckily for us all, it’s not political commentary, but a hilarious romp based on the play Le Menteur by Pierre Corneille. The play, written by the genius David Ives, who also penned the delicious Venus in Fur and New Jerusalem for the Classic Stage Company, revolves quite wickedly around Cliten (a fantastically funny Carson Elrod) in 1643 Paris, a manservant who can not tell a lie. He quickly gets hired as a valet by a dashing young gentleman, Dorante (a suave and beguiling Christian Conn) who seems to have a difficult time telling the truth. Deliciously directed with quickness and great flair for the ridiculousness by Michael Kahn, the play is a modern take of Shakespearian proportions on a French Comedy written in 1643, which in turn was based on a Spanish play, La Verdad Sospechosa by Juan Ruiz de Alarcon. Seems appropriate on another level to be seeing a farcical play that is based on a play that is based on a play. It befits the whole production and the day somehow.

Written in verse and in a pentameter style, as coyly confessed to us by Cliten in the delightfully engaging opening monologue:

“Oh, one small warning (and we’ve got a nurse).

At this performance we’ll be speaking verse!

In case you hadn’t noticed that small fact.

We’ll speak PENTAMETER, to be exact.

And what the blank’s pentameter, you say?

It’s what I’m speaking now! On with the play!” 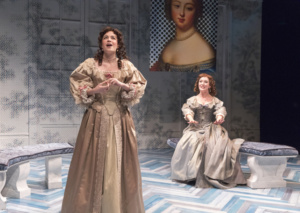 I must admit I had a nervous flashback when those words were spoken. Way back, when I was in my late teens, I sat through a play at the Grand Theatre in London, Ontario that was in verse, and that production goes down in my own theatrical history as the most excruciating time spent in a theatre, even more so than Finding Nederland. So hearing the sweet natured Cliten utter those words triggered all sorts of anxieties that are buried deep in my theatrical heart. It’s like PTSD (Post-Theatric Stress Disorder). I literally groaned (internally), but that response, I am quite happy to say, is not warranted here in the slightest. 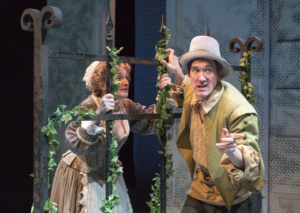 The play, like a glorious Shakespeare comedy it skewers (and quoted), is wonderfully staged (scenic designer: Alexander Dodge; costumes: Murell Horton; lighting: Mary Louise Geiger). It places almost all its hilarious madcap hijinks around the simple set-up of a man who lies constantly and his confusion about the name of a woman. The misunderstanding revolves around the two beautiful young ladies, Clarice (Ismenia Mendes) and Lacrece (Amelia Pedlow) that he meets on the morning of his arrival into Paris. Mendes and Pedlow are both perfection in their sincerity and their ridiculousness. They have such wicked fun with each other that’s it’s impossible not to join in with them. Throw in a simple but gorgeous rival, Alcippe (Tony Roach – who was magnificent in one of my favorites from last season, Bright Star), and a pair of identical twin maids, Isabelle and Sabine (both played by the utterly spectacular Kelly Hutchinson) who are as different in personality as sweet and spicy, and we are off on a wise and smart frolic of mistakes, lies, and misunderstandings. Oh, yes, and love – although it feels more like lust…

Hutchinson almost steals the thunder away from all these talented comic actors with her dual role of very different but identical maids. Every entrance solidifies her distinctive take on these two ladies hilariously. My companion at the theater that night, a hair guy, commented on how amazing the wigs were, and seeing that they never even entered my consciousness, I have to agree, so two thumbs up to J. Jared Janas (wigs/hair).

On the flip side, we have a lovely touching performance by Adam Lefevre as Dorante’s sweet father who trusts his lying son completely. One can feel the tears that gather in his eyes when he is forced to reconcile with the fact that he has been wrong to have such faith in his son. It’s a touching scene, which just exemplifies the talent that is being shown here. For all the craziness and silliness of the dialogue, the idiosyncratic references, and the over-the-top antics, the emotional underlying truth is still present and accessible. I couldn’t have asked for a better remedy to the week prior. My knee jerk reaction was very unfounded. This wonderfully hilarious play may have raised my spirit at a rough time in our lives, while also possibly mended my historical trigger to spoken verse, and restored my faith in rhymes.
For more go to frontmezzjunkies.com
Related ItemsAdam LefevreAmelia PedlowAubrey DeekerCarson ElrodChristian ConnClassic Stage CompanyDavid IvesIsmenia MendesKelly HutchinsonNewRossThe LiarTony Roach
Off Broadway