The Lifespan of a Fact Describes our Country Today

The Lifespan of a Fact Describes our Country Today

Jeremy Kareken, David Murrell and Gordon Farrell’s The Lifespan of a Fact, based on the essay/book by John D’Agata and Jim Fingal, now playing on Broadway at Studio 54, will have you in deep discussion long after you see the play. 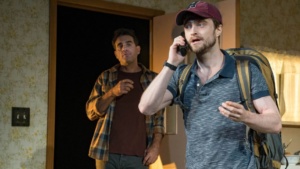 Jim Fingal (Daniel Radcliffe) has been hired by Emily (Cherry Jones) to fact check an article by John D’Agata (Bobby Cannavale). When he does, the inaccuracies are overwhelming. The article, based on a teenager’s suicide in Las Vegas, states there were 34 strip clubs in the city when there were only 31. It talks about a bar called Bucket of Blood, when in fact its name was Boston Saloon and that is just the tip of the iceberg. More importantly, D’Agata has turned another teen’s suicide into a hanging. She has become nameless and lied about despite the fact she also jumped to her death. 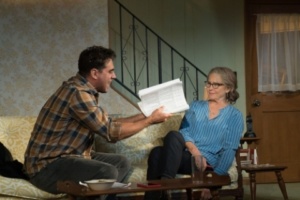 From Wednesday to Monday morning, Jim and John argue via email, phone, and finally in person, until Emily steps in to play referee. D’Agata doesn’t care about the facts but the rhythm and the emotionality of the story. He doesn’t write articles, but essays. 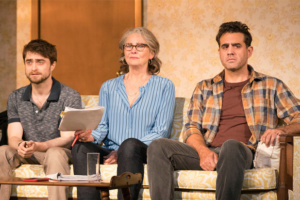 The most telling part of this drama is that Emily sees this as her “legacy piece,” and “rare piece of writing,” despite the fact that most of it is fictionalized to manipulate a response from the reader. My question to D’Agata is; how hard would it have been to not include the other suicide victim and make this not a gender issue, but a widespread issue? Much more of an emotional impact.

The play asks the audience to judge how negotiable is a fact, as well as what is “truth” and “accuracy”, and is it important? This whole play is based on the 2003 event when Harper’s magazine approached D’Agata to write an article and then later rejected it due to disagreements related to its fact-checking. Later, that same essay was accepted by another magazine, but not before they handed it to their own fact-checker, Jim Fingal. It took seven years of arguments, negotiations, and revisions to navigate the boundaries of literary nonfiction.

The cast is at the top of its game with Radcliffe holding his own, if not pulling just that little bit ahead of his megawatt cohorts. He is riveting to watch.

I really loved this play, as this is what is happening in the media today. Ironically, I was definitely on the side of Jim, while my fellow attendee was on the side of John. I just could not understand how the facts, if assembled correctly, couldn’t make just as of compelling an argument, if not more.

Suzanna BowlingDecember 23, 2020
Read More
Scroll for more
Tap
Inside Broadway Inside The Band’s Visit
AKA Times Square Celebrates Partnership with The Band’s Visit with Exclusive Event