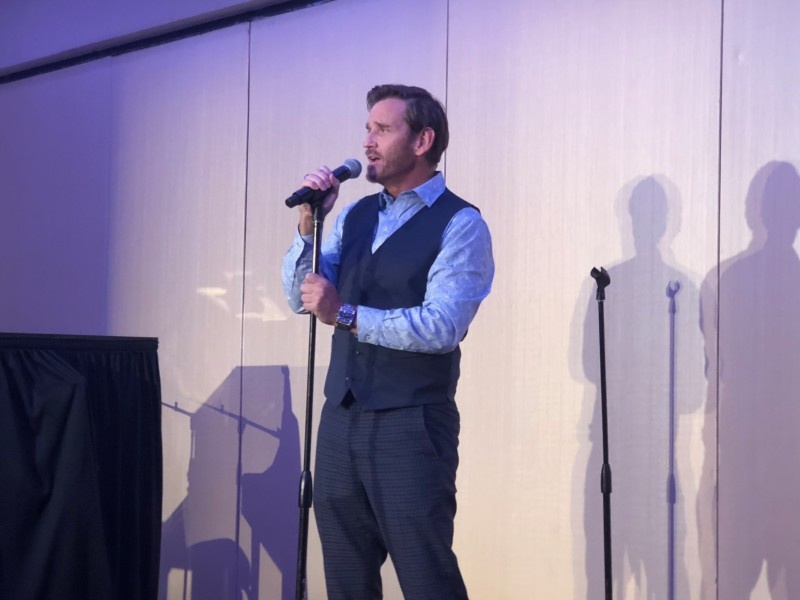 The Jane Elissa Extravaganza benefited the Jane Elissa Endowment Fund for Leukemia/Lymphoma Research, Cancer, Broadway Cares/Equity Fights AIDS and other charitable causes. For 32 years Jane has given from her heart and soul.

Jane’s the Lifetime Commitment Award this year went to Broadway’s Sean McDermott, who sang the title song from Starlight Express, a show he stared in.

Sean McDermott is recognized as one of Broadway’s leading performers starring as Chris in Miss Saigon (original Broadway Company opposite Jonathan Price and Lea Salonga), Whizzer in Falsetto’s (opposite Mandy Patinkin) and Danny Zuko in Grease (opposite Lucy Lawless). Other leading roles include Billy Flynn in Chicago and many more.

Sean treated the audience to “Can’t Take My Eyes”

On television Mr. McDermott co-Starred as “Yul” Opposite Jon Voight on Ray Donovan, has appeared in Law and Order SUV and starred as Hart Jessup in the long running CBS daytime drama Guiding Light. Since the audience wanted more Sean did an encore of “New York, New York”.

In 2007, Sean was honored to be hand-picked by Barbra Streisand to sing alongside her on her European tour. He has traveled the world performing with some of the most celebrated Symphony Orchestras and has shared the stage with such legendary entertainers as Bernadette Peters, Mandy Patinkin, Elaine Stritch, Hal Holbrook, Johnny Mathis and Robert Goulet. He sang for the President of the United States at the Kennedy Center in Washington D.C. on three separate occasions and gave a command performance for Sarah Ferguson, Duchess of York.

Jane Elissa Extravaganza for 32 years has raised money, given hope and been a labor of love.

To donate to this worthy cause that Jane Elissa has shouldered for 32 years go to hatsforhealth.com and see what this talented artist has created.