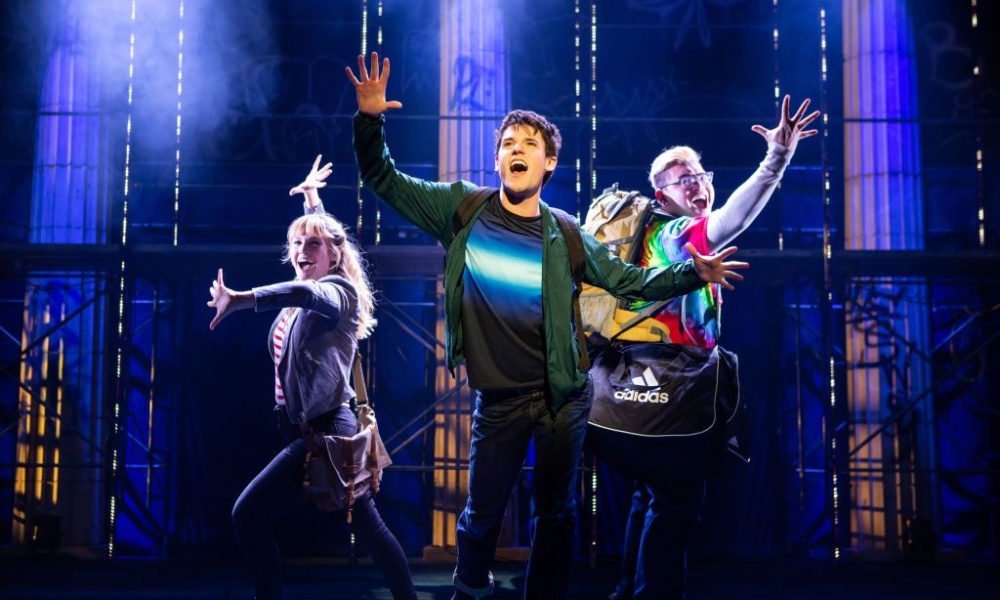 When I saw The Lightning Thief – The Percy Jackson Musical in 2017, Off Broadway, I thought the show was high voltage. But back then the show had some talented kids on the rise, such as George Salazar (Be More Chill), Jonathan Raviv (The Band’s Visit) and as Percy (Chris McCarrell, Les Miserable revival). McCarrell is still in the show and he had been on Broadway, but the rest of the cast is making their Broadway debuts. There are 9 of them. Straight from a low budget tour, to Broadway they came and everything here seems second rate.

In 2017 I stated the direction by Stephen Brackett keeps the pace at God like speed. The choreography by Patrick McCollum is unimpressive and looks messy. Book by  Joe Tracz will appeal to teens and will keep their parents from being bored. The music and lyrics by Rob Rokicki is tuneful and toe tapping, especially “Drive.” The orchestrations by Wiley Deweese & Rokicki are fleshed out and polished. Sydney Marescas costumes are low budget designs, David Lander’s lighting makes you feel you are in rock concert mode and Lee Savage’s set is utilitarian. This show looks like their budget could have used some Godly assistance. None of this has changed.

The Lightning Thief and Percy Jackson was invented by Rick Riordan. Those books sold twenty million copies worldwide and were made into a film. The show in the gross is failing and I would be surprised, if it lasts as long as it plans.

The “rock musical”, revolves around Percy (Chris) who’s just discovered he’s a demi-god, thanks to his human mom’s (Jalynne Steele) liaison with Poseidon (Ryan Knowles), the god of the sea. Percy winds up at Camp Half-Blood, a summer camp for other kids just like him. Grover (Jorrel Javier), is a happy-go-lucky satyr; Annabeth (Kristen Stokes, who was in the Off Broadway version), Athena’s daughter, who wants to go on a quest. The head counselor Luke (James Hayden Rodriguez), son of Hermes; and the camp’s director Mr. D (Javier, again), who happens to be Dionysus, the god of wine need Percy to go and retrieve Zeus’s lighting bolt, which seems to be stolen.

In the show Annabeth sings “My Grand Plan”

“My grand plan is that I will be remembered / My grand plan, just you wait and see / They better wise up, cause I’ll rise up / Bring on any challenge, and someday soon, someone will notice me.”

Somehow I think this show, will blow into oblivion, much like to toilet paper it throws into the audience.