In reading my playbill, a lot of what did not make sense on stage at the Broadway theatre started to unravel. Billed as a Cirque du Soleil-esque acrobatic, global-dance-theater escapade, The Little Prince is more like the dollar store variety. 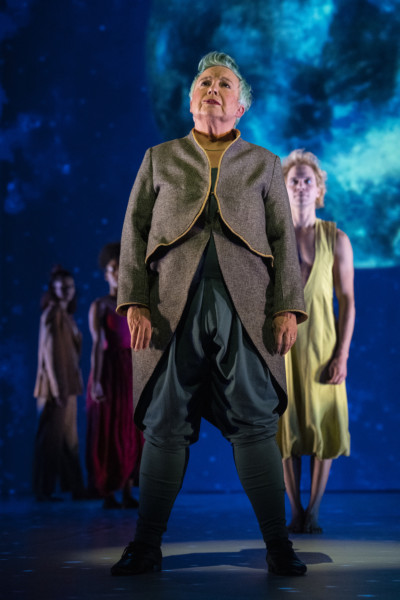 First up is the narrator Chris Mouron, who looks like an escaped oompa loompa. Speaking in what I can only guess was her best child’s high pitched narration voice, she tells the story, as it is projected, as if we can not hear on side panels. She sings ala Laurie Anderson, which is not my favorite sound. All the music in this piece by Terry Truck and Ms. Mouron is ballad heavy, avant-garde, esoteric, electronic music, that goes nowhere for two hours. Mouron is also the co-director.

Then there is the direction and choreography by Anne Tournié, which feels as if she took tranquilizers. This show drags on and on and on. Even when the show starts ,we have to wait at least 10 minutes as swirling images are projected as an engine is heard. Everything is the same. There really is no variation despite the amount of characters we see. The acting is messy, confusing and boring.

Antoine de Saint-Exupéry’s beloved 1942 novella has always been surreal and poetic. Here, an aviator (the athletic Aurélien Bednarek) falls to earth in the Sahara after his plane crashed. He meets a little prince (the golden haired Lionel Zalachas) who balances on balls and whom we never feel is a child from another planet who loves a Rose (an exquisite Laurisse Sulty). In telling his story we meet The King (Joan Bertrand), a Vain Man (Antony Cesar) whose into selfies, a Drunkard (Marie Menuge), the Businessman (Adrien Picaut) and The Lamplighter (Marcin Janiak) who climb into the night’s endless skies to light the world and all are aerialists. Except for the talent of the dancers, it all seems the same and rather dull.

Then in the second act after a 20 minute intermission, the same 10 minute swirling projections and the engine. This time we meet the Fox (Dylan Barone) and a Snake (Srilata Ray), who looks more like a snail. The only time the show comes alive is when the Rose and then the Rose’s dance. The male performers join the females in dance and it is powerful.

The costume design By Peggy Housset is hit and miss. The video design by Marie Jumelin, the video projection by Etienne Beaussart  and the lighting design by Stephane Fritsch, are neither magical or exciting.

It is only after the show takes its bows do we get an aerialist into the audience as heart petals descend. A little too late in the game.

This is a must skip and does not belong on Broadway.

Suzanna BowlingJune 21, 2022
Read More
Scroll for more
Tap
Birthday Candles A Look at a Life Well Lived or Was It?
Legendary Broadway Casting Director Jay Binder Has Passed On