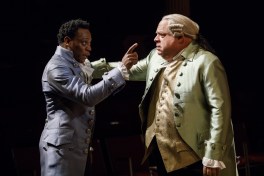 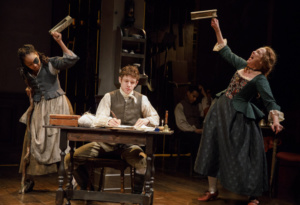 The hypocrisy of money, commerce, and economy is the theme of Bruce Norris’s (Clybourne Park, The Low Road). This extremely well-done production at the Public Theatre is a must-see of the season. 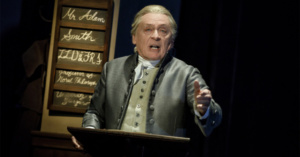 Set in the colonial US, this satirical romp is narrated by Adam Smith (Daniel Davis), the writer of “The Wealth of Nations”, who tells of the adventures of Jim Trewitt (Chris Perfetti). Left as an infant on the doorstep of a whorehouse, Trewitt is raised by Mrs. Trumpet (Harriet Harris). There was a note attached to his basket that has everyone believing he is the illegitimate son of George Washington. Trewitt is by nature a self-centered, obnoxious man who feels the world owes him a living. He believes in pursuing his own fortune no matter the cost to others. After killing a man, he is forced to seek his fortune. When he purchases a well-spoken and self-assertive black slave named John Blanke (Chukwudi Iwuji), the hilarity begins. Trewitt, who prospered after killing another man for coinage, loses it when he is robbed by a woman. Trewitt and Blanke find themselves shackled together, two polar opposites, treading the thin lines that separate humanity. We see their interactions in two very different households. Jim becomes a wheeler and dealer but is self-sabotaging. Suspicious financial transactions get him into hot water. Intermission. 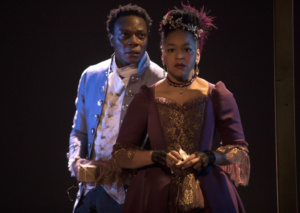 When we come back, the play has shifted forward to present time, as an economic forum is taking place. Whenever the truth is about to be spoken, the microphone goes static. As the forum is stopped by an Occupy Wall Street movement, we are back in the past. Unbridled capitalism ends up destroying, as bee-shaped aliens arrive with prophecies of the future, reminding us that we haven’t really come that far at all. 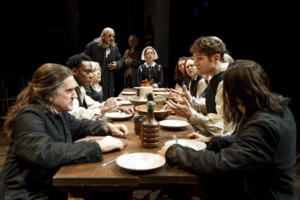 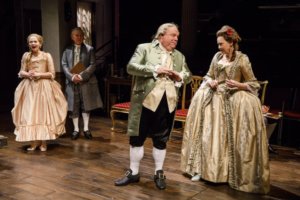 The direction by Michael Greif (Dear Evan Hansen) is superb as he plays the twists and turns of this thrilling roller coaster type ride to the hilt. David Korins’s (Hamilton) set is simplistic yet says so much. The costumes by Emily Rebholz’s (Indecent) tell us exactly where we are. The fabulous wigs, hair, and makeup by J. Jared Janas and Dave Bova (Bandstand) enhance the effect and the sound design by Matt Tierney (Red Speedo) is spot on. Only the lighting by Ben Stanton (Fun Home) lack. There were several times when the actors were not lit.

Morality has never been so much on the witness stand as it is now, and The Low Road brilliantly highlights its flaws.