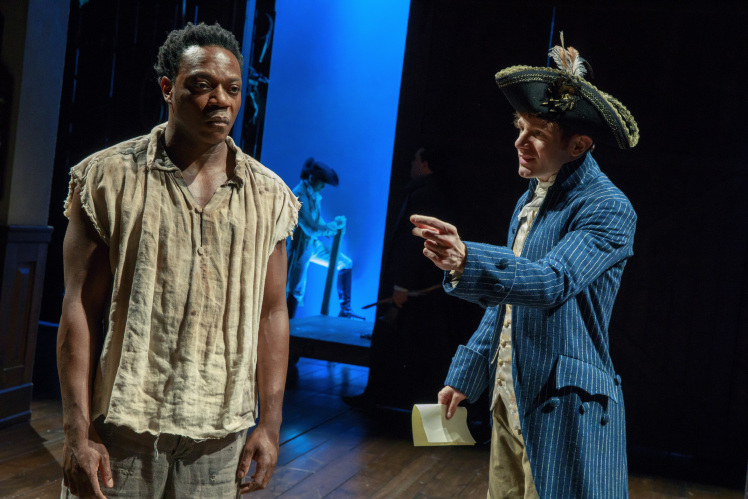 The Low Road Tries Valiantly To Hit the High

The Low Road Tries Valiantly To Hit the High

Michelle Obama once inspiringly told us that when they go low, we should go high, and although I have always believed in that motto whole heartedly, it all didn’t quite work out in the way that I was hoping it would in the last election.  But over at The Public Theater, playwright Bruce Norris (2ST’s A Parallelogram) has decided to go down The Low Road with a vengeance, and in a miraculous manner, he has hit the high.  Somehow Norris has found a way to set a story in the mid to late 1700’s and smack our modern political nightmare with a powerful punch in a way that few plays produced this year have.  It has managed what many have tried, such as another Public show, Kings; to make a commentary of our particular troubling state of affairs, a world that America has created, with pointed arguments and astute observances. Even when a few too many are not fully explored or detailed and the last half fails to stay as focused as the first, we do end up at the end of our travels more satisfied than not. The Low Road, with a huge and talented cast of 17 playing 50 different roles, not only has been fully entertaining and a joy to behold, but we discover we have been satirically informed and taught a thing or two as we sat back and shared this rollicking adventure down a bumpy dirt road towards morality.

Director Michael Greif (Broadway’s Dear Evan Hansen, Signature’s Angels in America, 2010 revival) with a caustic eye for biting humor and poignant commentary, has guided this fantastic crew to create a stunningly simple but expertly designed stage by David Korins (Hamilton), with stellar costumes by Emily Rebholz (Indecent), perfect wigs, hair and makeup by J. Jared Janas and Dave Bova (Bandstand), solid lighting by Ben Stanton (Fun Home), and exacting sound design by Matt Tierney (Red Speedo) for this cynical deconstruction and examination of systems of American structure and human nature that parallels the era we find ourselves trying to survive.  Following the life of its anti-hero, the stand-in for American greed, Jim Trewitt, played at first by the young Jack Hatcher, grows up under the care of the Mrs Trewitt, played by the marvelous Harriet Harris (Primary Stage’s The Roads to Home) to become the smart and status-hungry young man, portrayed by the fresh-faced Chris Perfetti (Broadway’s Six Degrees of Separation), whose character doesn’t possess any innocence or generosity that one could hope for in a young man. He has placed his faith and humanity in the free market, and responsed to charity with abuse, but his path to riches becomes entangled with an educated slave, John Blanke, played exquisitely by Chukwidi Iwuji (National Theatre’s Hedda Gabler, Public’s Hamlet) who knows a thing or two about the cost of such thinking, especially as it is reflected in the eyes of his love, Ntombi, played solidly by the chameleon, Crystal A. Dickinson (Broadway’s Clybourne Park).

Their adventure together, although not made from an engaging sense of comradery, finds the two shackled together literally and metaphorically coming face to face with all levels of humanity, humility, and riches. Their dialogue is dynamic matching the highly energetic storytelling being given to their story. They experience first hand the thin and imaginary lines between exploitation and opportunity through two very different households, with each one being wonderfully portrayed by this solid cast of professionals. Neither of the two men, polar opposites in outlook, come out particularly clean of the dirt that society throws at one another, especially if rank and status are at odds.

The surprising first scene in Act Two, a shock to our system and one completely unexpected, doesn’t feel entirely necessary, although the question that hangs in the air: “Why legislate unfairness?” is powerfully relevant. It is as if we are being schooled by a superior in an idea or metaphor that was pretty obvious to begin with, but it does give us a measured signal that the second half is not as solidly structured or as tight as the first. Norris becomes a little less focused in his closing argument, losing a bit of his stance in his lecture and diatribe, but manages to hold fairly true to his overall thesis.  “Would you give the keys to the same drunk driver who just crashed the car?” This examination of the basic capitalistic beliefs from which our modern economic society has been built, set in  the 18th Century, is as inventive, exciting, and exacting in its biting commentary as one could hope while also being wildly entertaining.  This is exactly why we need institutions like The Public Theater, to produce and partake in such adventures in story-telling that fall outside of the norm and challenge our senses while addressing us intelligently with social commentary, especially during a time of such conflict as we are experiencing now.  There are too many Jim Trewitts to deal with at the helm of our government at the moment, and hopefully, just like Norris, history will not be kind to them.