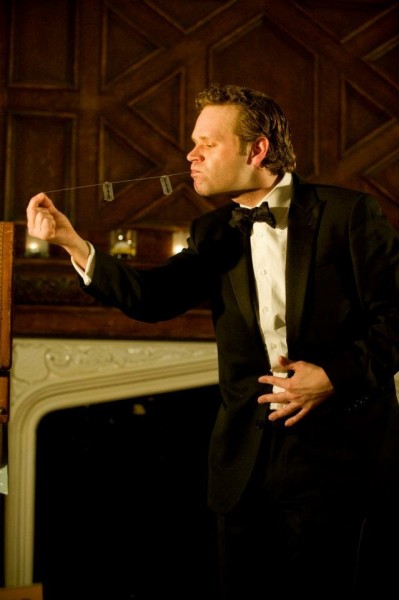 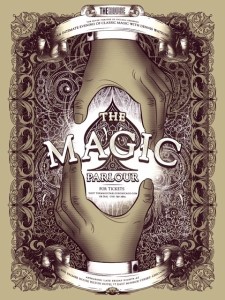 Looking for a delightful diversion, sophisticated night out, yet also craving something highly entertaining? The answer is The Magic Parlour  with Dennis Watkins, now celebrating its fifth successful season at the elegant Palmer House Hotel. The audience was in store for an inventive and entirely engrossing evening of classic, up-close magic. A brisk 75 minute showcase from world-class entertainer, Dennis Watkins, a third-generation masterful magician. He shared with us he learned the tricks of the trade as a child, studying under his grandfather’s tutelage.  Staged in one of the Palmer House’s swank private rooms, the 40 member, sold-out audience was captivated by both the illusions (his) and the laughter (theirs). A cultured evening of magic and mindreading impressed a crew of no-nonsense Windy City citizens rendered completely awestruck and amazed. 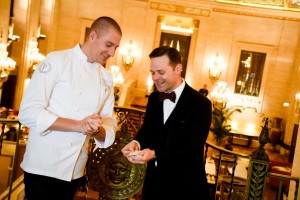 Watkins himself, most recently featured as the enigmatic lead in The House Theatre’s production of Death & Harry Houdini, played both guide as well as featured performer.  The audience members congregated initially in the Palmer House’s Potter’s Lounge, only to be personally escorted to the performance venue by Watkins. A selection of wine, beer and soft drinks are included with admission, with Watkins also playing bartender.  After the audience relaxed into their seats, the real, and pardon the pun, “magic” began.  The show was filled with sophisticated, slight of hand, card tricks, “unearthly feats” including Watkins individually swallowing, then regurgitating, razor blades tied meticulously on a string, and many more “how did he do that?” moments than I won’t detail here for fear or spoiling the fun.  The audience completely spellbound as we collectively shared some truly unexplainable things during the duration of the show’s wild ride. Watkins claimed he would “take people to the land of enchantment” and that he did. 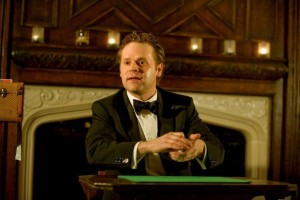 Explaining early on in the show, his grandfather was his original source of inspiration, expressing to him, “if you put someone inside of a box and cut them in half, people rarely believe that is magic. They believe it’s a very special box.  But if you can tear up their dollar bill and restore it right under their nose, or look into their mind and read their thoughts, or create any number of other miracles inches in front of their eyes, that is an experience they will never forget.”  This intimate and ornate evening was chockfull of unforgettable moments from start to finish. Involving multiple members of the audience in almost every trick, myself included in the encore finale, we onlookers quickly surrendered to the spectacle that was pure Watkins. Charming, engaging, warm, with a trademark subtle smirk, Watkins is, to put it  simply, the master of his imaginative domain. 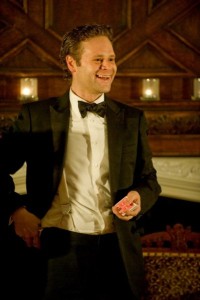 Intimate and ornate in design, The Magic Parlour  with Dennis Watkins is a winning, mindreading, logic defying hit!  World-class magic displayed in an up-close setting, audiences will be astounded and flabbergasted. Completely appealing and absorbing from start to finish, The Magic Parlour needs to be seen to be believed.  No silly smoke and mirrors or fake trap doors in sight, just a fantastic, sophisticated and engaging night out.