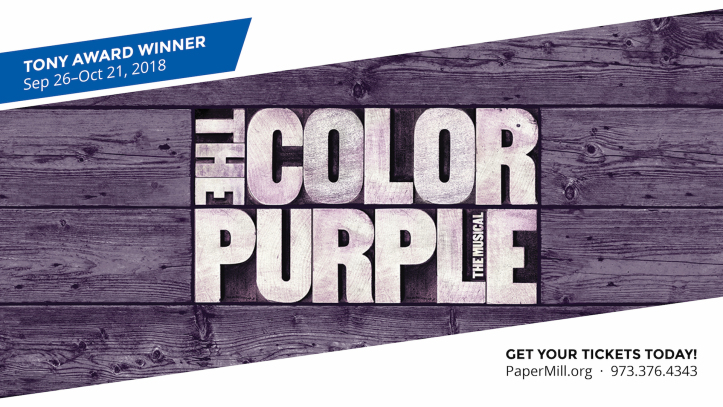 When I walked into the Paper Mill Playhouse to see The Color Purple, I was curious what I was about to see. I assumed I was going to a new revival of the show that started out so long ago on Broadway with the opulent projected visuals trying hard to create the landscape that we remember so well from the beautiful film starring Whoopi and Oprah. The show also had the most stunning pared down revival a few years ago, a much stronger version stripped of its vistas in order for us to really see the gospel heart of the musical and the women at the center. Cynthia Erivo brought the congregation to its feet nightly as did Danielle Brooks from ‘Orange is the New Black‘. Jennifer Hudson sauntered in basking in the glory of her star status, although replacement Heather Heady brought the house down with her saucy Shug. The Color Purple, the revival brought to us by the fantastic Menier Chocolate Factory in London, was a huge success, and as soon as I saw the three sectioned wall of chairs on the Paper Mill, I knew exactly where I was. This wasn’t going to be a third view inside Alice Walker’s epic heart-breaking novel by the same name, but the John Doyle (The Visit, Company, Sweeney Todd) directed Broadway show, warming itself in the huge housed sun of the Paper Mill. And what a happy camper I was to welcome back this glorious telling of this tale of empowerment. A powerhouse story needed today, maybe more so, than when I saw it years ago.

Doyle as director/set designer, when reviving this solidly harmonious musical tears the show down to its basic parts, and with that treatment, blows the ceiling off this newly renovated playhouse like no other. The sound was a bit shaky in the first act, but settled into its balance for the more dynamic second. When I saw the show on Broadway (twice, but only the revival, never the original), I had to ask this fun and thrilling question: Are we in a theatre or a Gospel Church? It was hard to tell as the excitement and the love was so loud and vocal, with audience members talking to the stage like it was their best friend in need of some reassurance or guidance. This didn’t happen at the more gentil Paper Mill, but the gospel soul was as present as ever that Sunday afternoon on stage at the musical theatre church of Milburn, NJ.

Cynthia Erivo, who won a Tony for her portrayal of Celie in the Broadway revival, was by far giving us something to stand up and cheer for. Watching it once again, far removed from the Broadway stage, the show’s structure reveals its layers even more gracefully and subtlety than before. With Erica Durham (the understudy – replacing Adrianna Hicks for the performance on Oct 7th) in the lead, beautifully pulling us in to her emotional core, the actress and the music and lyrics start out as scared and quiet as a bird, just like her character, and we watch, moment to heart-breaking moment as each blow strikes her down physically, rarely rising up from the crouching position on the wood floor. Her resilience and strength to stand up to her oppressor finally snaps her upright once the people she loves, respects, and cares for alter her vision ignited by their own adjustments to their life. Sometimes it’s from a show of Shug power, and another, from a devastating moment of Sophie’s defeat. Celie’s size and spirit grows right before us, lifting her inner voice and internal strength up onto one of the many chairs. It’s probably one of the most finely created ascents you will see, and Act 2 soars because of it. When I saw Erivo deliver those compiled moments of strength, the theatre vibrated with her majestic power, and the feeling still exists in the Paper Mill production. Durham is solid and engaging in the role, but never demands the same level of attention and focus. That’s not a terrible thing though, as this show now feels less like a one woman’s story, but a story of all these women fighting hard for their rightful piece of the power pie.

The others, every last one of them, deserve the glorious praise of all. Carla R. Stewart as Shug feels divinely authentic and sensually dynamic as any of the others I’ve seen, and Carrie Compere as Sofia, gives us plenty to smile, clap, and laugh about, especially that moment when she rises up out of her deadened self with a laugh so pure that all we can do is join with her in her rebirth. The two deliver performances that pull it all together in unity, playing their secondary roles to perfection and making the musical broaden its focus to include all the women on stage and off who know that feeling of being treated like dirt. I have always loved Sophie’s number, the one that makes us howl with love and support as we watch Compere’s Sofia stand up for herself and defiantly yell , “Hell No!” She does it with spunk and honesty that it’s a telling inspiration to us all, especially at this time in American history when roof raising is just what the doctor ordered.

John Doyle directs this touring production simply and elegantly, with a perfect touch of comic energy coupled with a dynamic and forceful message of empowerment.  The music by Brenda Russell, Allee Willis and Stephen Bray, and the book by Marsha Norman serve this Alice Walker story effortlessly and sublimely, mixing gospel and broadway perfectly. I hope you all get to find your way into this Color Purple Gospel Church when it slides into a theatre near you. It’s broader and more generous in a way. Maybe the show feels more important in regards to its message right now, as we watch powerlessly that horrible Supreme Court nomination circus, where a brave intelligent woman was ignored, and a highly offensive and inappropriate white man win in the end. This show, and all the performances within stand strong against about how these men and the GOP society views violence against women. We join these ladies and upright ourselves trying to alter the powerless position we find ourselves. Especially now. If only women dominated politics like they do the stage, working as a team to bring unity and understanding to inequality, we’d all be better off.  And maybe, just maybe, we could have a show end, rather than with the closing phrase being “Ah…MEN”. Let’s pretend, both times, that they all gloriously sing “Ahhh…WOMEN”. That’s the ending word that I want to have stay in my bones forever.

Suzanna BowlingMay 6, 2022
Read More
Scroll for more
Tap
Good Timing for What the Constitution Means to Me
Marin Mazzie Will Be Celebrated October 25 at Broadway’s Gershwin Theatre