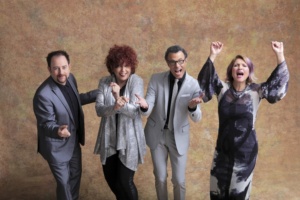 Paul graduated in 1971 from Newark State Teacher’s College, now Kean University, with a music education degree. The following year, he met the three people with whom he would go on to form The Manhattan Transfer. The group’s four-part harmonies have led them to eight Grammy Awards in the pop and jazz categories and a career still going strong more than four decades later.

“I’m really excited about coming back to Kean,” said Paul. “When we got the invitation, I said we simply have to go. It’s my alma mater.”

Paul was a member of the first graduating class of music majors at Newark State and was a brother of Sigma Beta Tau. In 2006, he earned the University’s Distinguished Alumni Award in celebration of his lifetime achievements.

“Many of our fraternity brothers are looking forward to seeing Alan perform with The Manhattan Transfer,” said Kean Alumni Association President Ed Esposito.

While at Kean, Paul will also take part in a master class with music and theatre students, offering first-hand advice and talking about his journey.

The members of The Manhattan Transfer are known for incorporating pop, rock, jazz, R&B, swing and a cappella music into their songs. In 1981, they won Best Pop Performance by a Duo or Group with Vocal for Boy From New York City, a cover of the 1964 song by the Ad Libs. They also won Best Jazz Performance Duo or Group for Until I Met You (Corner Pocket), making them the first act to win Grammy Awards in the pop and jazz categories in the same year. In 1985, their album, Vocalese, set a record with 12 Grammy nominations. Through the years, they have performed with numerous jazz legends and great vocalists, including Dizzy Gillespie, Tony Bennett, B.B. King and Bette Midler.

Their journey began with Tim Hauser, who in 1972 was driving a New York City taxi while aiming to form a vocal harmony quartet. One of his fares was Laurel Massé, another aspiring singer looking to form a group. A few weeks later, one of Hauser’s fares invited him to a party, where he met Janis Siegel. As the trio was rehearsing, Massé’s then-boyfriend, who was a drummer in the original Broadway production of Grease, introduced them to Paul, who was playing the role of Teen Angel. The rest, as they say, is history.

“The last thing I ever thought about doing was being in a group,” said Paul. “But my instinct said to do it. I love vocal harmony groups.”

They gained popularity playing in clubs around Manhattan and released their self-titled debut album in 1975. The song Operator became their first national hit. It wasn’t long before the group was making guest appearances on talk shows and variety shows. They even hosted their own one-hour summer replacement variety show, featuring musicians as diverse as Bob Marley and the Wailers.

“We sang with Ella Fitzgerald, met Frank Sinatra and were on the Mike Douglas Show with Fred Astaire and Gene Kelly,” said Paul. “We’ve had some very exciting experiences.”

In 1978, Massé left the group and was replaced by Cheryl Bentyne. They performed together as a quartet until Hauser died in 2016.

“We had to figure out whether to stop or continue,” said Paul. “It took us a year to mourn him.”

They decided to go on, replacing Hauser with Trist Curless, who had subbed several times for Hauser while he was ill.

“Trist is fantastic,” said Paul. “We weren’t looking to replace Tim; Tim is irreplaceable. Trist understood what we were doing, and he knew our music. He’s a very talented jazz singer.”

In March, The Manhattan Transfer released their first album in nearly a decade, The Junction, dedicated to Hauser. The record has received positive reviews and the group just finished up a European tour.

“I think our music has endured because we’re so eclectic,” said Paul. “We decided early in our career that we didn’t want to be labeled.”