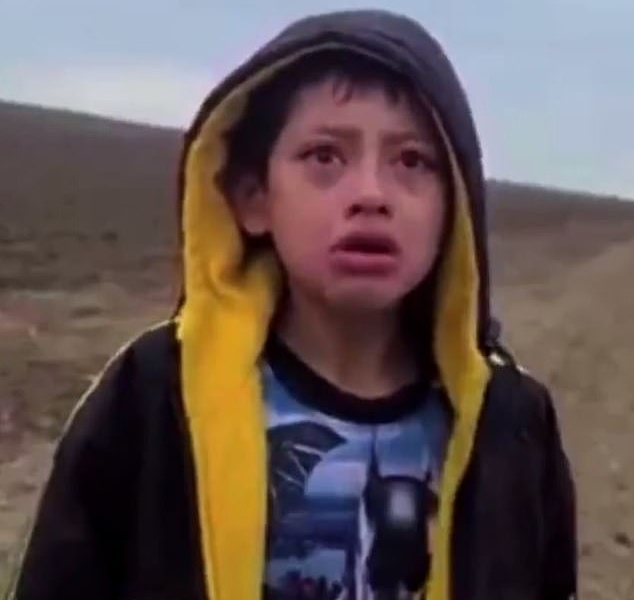 ‘Somebody could kidnap me, I’m scared’: Moment sobbing migrant boy approaches Texas border patrol after being abandoned and spending night in desert That is the headliner of the Dailymail meant to play on your emotions.

The boy looks to be about 11- 13 and is one of thousands of unaccompanied children who cross the border each day.

1: Where are their parents?

2: Now he’s scared because most likely he walked here or was he bussed. He is clean and not dirt encrusted or emaciated from starvation. These kids are coming from almost 3,000 miles away. Who is paying for this mass exodus?

3: The child states “Somebody could abduct me, kidnap me. I am scared.” Does this mean he was not abducted, kidnaped or unafraid until this moment? How does this happen. When I was 13, I was not allowed to go even 15 miles away from home.

4: These immigrants are being housed at our US Military bases. Fort Bliss Army base in Texas has built six tents and each hold up to 1,000 migrants. Soldiers have reportedly been banned from photographing the camp or talking about this. In order for an American to get into one of these bases you must show security, ID and must be pre-approved as their is military equipment and our countries secret arehoused there. Now we allowed people who are undocumented into these bases. Have we not heard of the Trojan Horse? As it is two Yemeni men on the FBI’s terror watchlist were arrested for illegally entering the US from Mexico. How many others have come in?

5:  In order to get into the Pop-up theatre event on Saturday there was a medical tent, metal detectors, you needed to pass an app, have ID, and proof of negative Covid test or vaccination. Yet at the boarder NOTHING! Hypocritical much?

6: We are so worried about people not wearing masks or not getting a FDA unapproved COVID shot, yet we are not afraid of undocumented migrants carrying COVID and being released into society without face masks, testing or shots.

I’m mad as hell why the hell aren’t you?