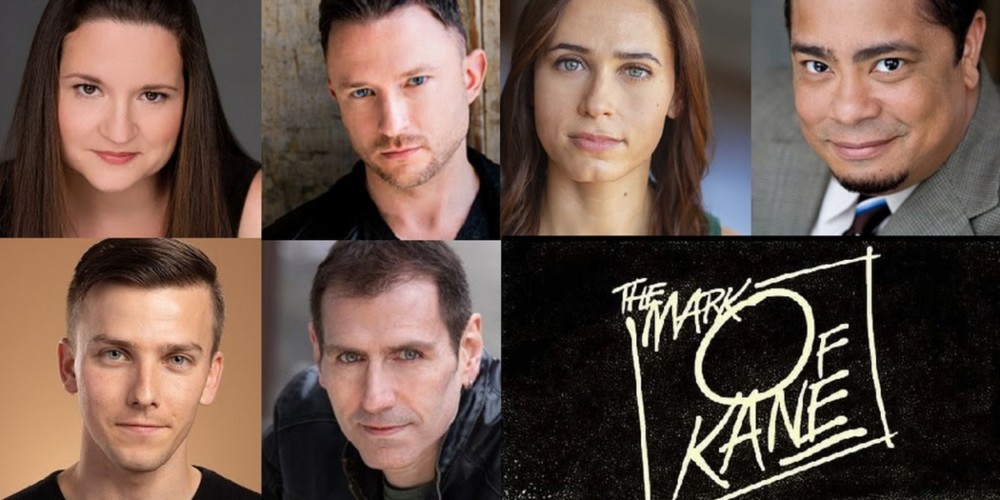 Back in 1939, two young friends from high school in a small Brooklyn apartment put their talents together and created The Batman. One became rich and famous. The other died broke and alone. The tragic story behind this sad enigma is fascinatingly told in the engrossing new play, The Mark of Kane by Mark Pracht, now receiving a world premiere presentation at Chicago’s City Lit Theater. 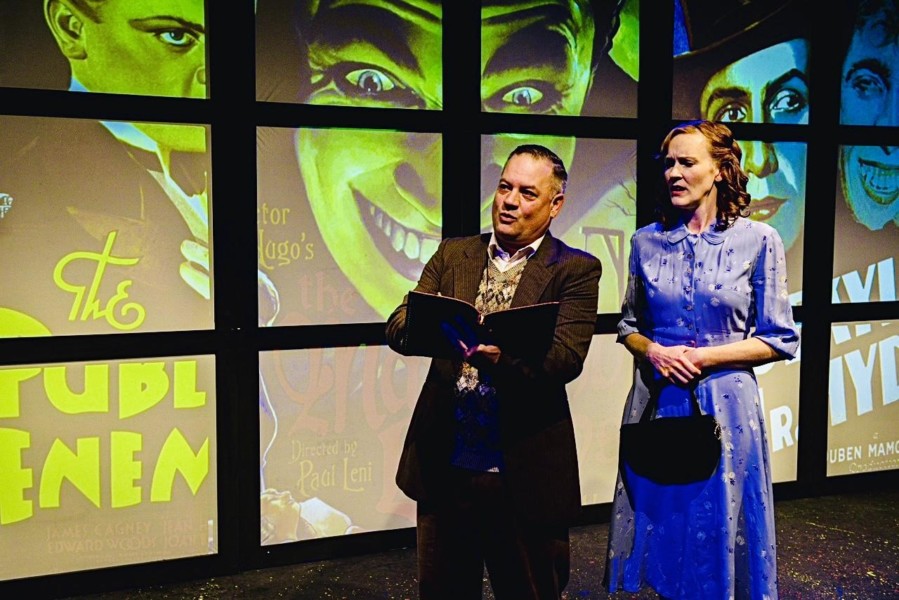 Todd Wojcik and Annie Hogan in The Mark of Kane. Photo by Steve Graue

Since 1979, Artistic Director Terry McCabe has passionately nurtured literate new plays with his small, non-Equity theater company.  The Mark of Kane is yet more proof that theater is about the talented people who make it, and not about how much scenery you can move around or how much money you can throw at it. I enjoyed The Mark of Kane a heck of a lot more than the Spiderman musical. 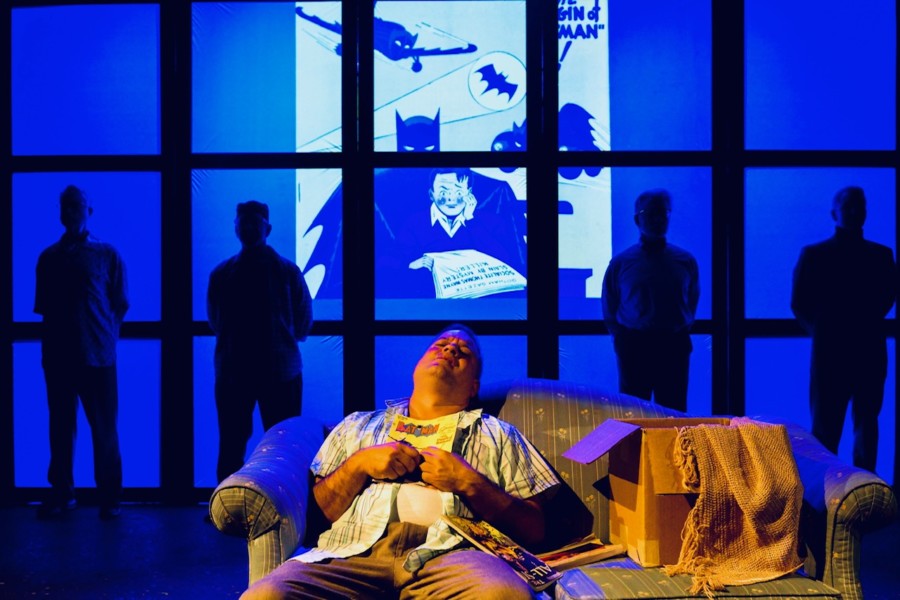 The Mark of Kane is the first of a three play series by Pracht called “The Four Color Trilogy” on major turning points in comic book history, to be presented over the next three years by City Lit Theater. On the basis of this impressive debut presentation, I  look forward to seeing the others. 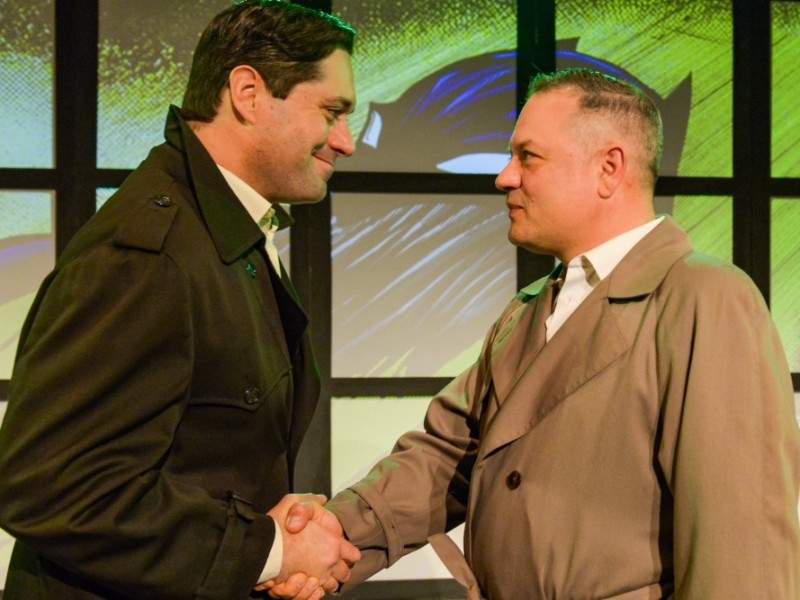 Like most of my generation, I grew up on comic books. They both inspired me to dream of having powers that would let me rise above my pre-adolescent struggles, and taught me that just having super powers doesn’t always make your life go smoothly, either.

Back in 1939, Jerry Spiegel and Joe Schuster created Superman, and launched the tales of superheros whose pantheon has become our culture’s answer to Greek mythology. But nobody in the comic book world expected they were creating an art form that would dominate the modern zeitgeist eighty-three years later.

Expecting that least of all, perhaps, was Bob Kane, a very average illustrator who wanted to create a Supermancopy he could sell. When he learned of a chance to pitch a copycat hero, with red suit and blonde hair, for a spot in Detective Comics, Kane turned to his old high school classmate, Bill Finger, who was a lover of dark classic yarns by Poe, and contemporary pulps like The Shadow.

Although Kane had the name for the character and the publishing connection, it was Finger who really created the dark and mysterious figure of The Batman, and the stories that made him a comic book icon. They were supposed to have been equal partners The Batman’s creation. But when it came to Bob Kane’s business ethics, Finger should have reminded himself of The Shadow’s famous quote, “Who knows what evil lurks in the hearts of men?”

The Mark of Kane is the story of how Kane built his career on the backs of others working for him, most of all Finger, while taking all the profit and credit for himself. The title of the play clearly riffs off the biblical story of Cain and Abel.  While Bob Kane didn’t literally strike his old friend dead, what he did to him was as good as murder.

Pracht, who is also a Jeff Award winning Chicago actor, brings a fine ear for dialogue and character to his story.  He does an excellent job laying out the various players in the history of early comics and the nature of that business, while holding our interest in the tragic arc of Finger and the apparent hero who became his nemesis.

As the self-absorbed, self-serving, ascot-wearing dandy, Bob Kane, Josh Zagoren is all clueless smarm. You just want to smack him, as you well should (and somebody finally does). He is, at times, as cartoony in the persona he created for himself as the one he drew. But it suits the man and the moment.

As the hapless Bill Finger, Todd Wojcik brings great warmth and sensitivity to every moment. We really feel for him as he descends from youthful optimism into the despair and alcoholism which eventually destroys him.

It’s hard to cast older, non-Equity character actors; but City Lit has found themselves a gaggle of good ones. Adam Bitterman as fellow DC Comics writer Arnold Drake, is a colorful, expressive personality, and the soul of the world around them. Other good work is done by Lee Kanne as Jerry Robinson (co-creator of Robin and the Joker for the Batman comics), David Valenta as Shelly Moldoff (co-creator of Batgirl and the super villains Poison Ivy and  Mr. Freeze), Michael  Sherwin as Jim Steranko, writer and artist of the Marvel Series Nick Fury: Agent of Shield, and Sean Harklerode and Linsey Falls as comic book executives.

Annie Hogan heart wrenchingly depicts Portia as she changes from girlish innocence and optimism to disappointment and bitterness over her husband’s refusal to fight for the credit that was rightfully his. Her beautiful, intimate work really illuminates the human core of the play.

Laura Coleman and Zoe Deprez play all the other women in the show with skill and sass. Dakota Pariset also does fine, subtle work as multiple younger male characters, most notably as the editor of a fanzine who finally gives Bill Finger his due.

The set and lights by G. “Max” Maxin IV are minimal, with a handful of furniture being scooted around and an upstage wall of projection screens doubling as doors. But this accommodates his wonderfully illustrative and evocative projections of comic book art and key visuals from illustration history. The dark music by Petter Wahlbeck always underscored the mood appropriately when used, although it could have been used even more.  Tony Donley also gets high marks for his poster and logo design, which brilliantly play off Kane’s distinctive comic book signature.

Producer/director Terry McCabe deserves ample credit for the careful development of this script. He also has done an excellent job guiding the nuanced performances of his well-chosen acting ensemble.

I was disappointed that there is no attempt in this production to age the performers or change their appearance across all the years the story covers, and no particular visual elements acknowledging the changes in style over time. The costumes by Rachel S. Parent, using clearly inappropriate, 1980’s double-breasted jackets for the 1940’s, and then largely ignoring the evolution of fashion which followed, contributed to the temporal confusion. The devil, as they say, is in the details.

The delicious chemistry between Zagoren and Wojcik always keeps us engaged in their story. But despite their individual talents, using the same actors in these roles over several decades, with no attempt to bridge the years with any aspect of their performances, makes them seem either too old or too young for their characters at either end of the story. At best, you will accept the emotional distancing this causes simply because you enjoy these two outstanding performances so much, and are busy contemplating their meaning intellectually. Brecht would have loved it.

As Finger gives up the fight to be acknowledged by history for his contribution to The Batman, the air of conflict gets let out of the story in the second act. Ultimately, Kane is allowed to shrug off what he has done to Finger without any fear of retribution. If Pracht’s fictionalized Kane were to express worry about that at any point in time, and have some self-awareness which haunts him, instead of just becoming increasingly smug and self-deluded, it might give the second act some much needed tension. As it is, the audience is unsure when to applaud in the end, as both the story and the staging end with a bit of a whimper.

It’s too bad, as I was told, that the production team didn’t even try to obtain the rights to depict The Batman himself onstage; because the spiritual shadow of The Batman looms large over the production at every moment.  How to depict that is, of course, a directorial choice.  In the end, I would have really liked to see the literal shadow of The Batman come for Kane himself.  I think something like that could have been done with projection, without any concern about copyright infringement. At least Kane could shrink from what he imagines to be the embodiment of his guilt. This Kane could use a touch of Macbeth in the end, cowering at the vengeful ghost of his own creation; or else, from his own personal Banquo in the form of Finger’s own shadow looming over him.  Regardless of how it is expressed, this production cries out for a final conceptual “button”.

A play with so much to offer, in a time when super heros are all the rage, is bound to have future productions where other embellishments may be possible. Even with that caveat, this production of The Mark of Kane is an auspicious debut, and a powerful, two-fisted tale for all audiences,  not just comic book fans. The Mark of Kane by Mark Pracht plays at City Lit Theater, 1020 West Bryn Mawr in the Edgewater Prebyterian Church in  Chicago, Illinois, now through December 4. For tickets call 773-293-3682. www.citylit.org.

Suzanna BowlingOctober 29, 2022
Read More
Scroll for more
Tap
Roundabout’s You Will Get Sick Weirdly and Wonderfully Just Wants to Click Their Collective Heels and Go Home
First Look: The Museum of Broadway