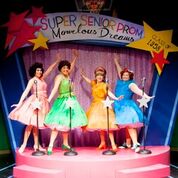 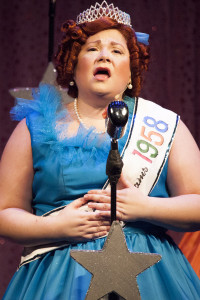 With close harmonizing from the 1950 The Marvelous Wonderettes, is like the female version of Forever Plaid. Now playing at the Kirk Theatre on Theatre row, this juke box tuner is sure to attract an audience who remembers a sweeter time. The cast has some real standouts in Kathy Brier and Christina Bianco and a TV personality that is an audience pleaser, at least the night I attended. 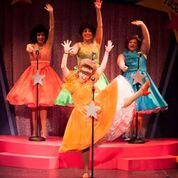 Christina Bianco out in front

Act One immerses the audience into a 1958 prom night, at the Springfield High School gym home of the Chipmunks. The reigning boy groups lead singer has been a bad boy, so a girl group comprising Cindy Lou (Jenna Leigh Green Wicked, “Sabrina the Teenage Witch”), Betty Jean (Sally Schwab A Broadway Diva Christmas), Missy (Christina Bianco, Application Pending) and Suzy (Kathy Brier Hairspray and “One Life To Live”) gets their big break. Their set list includes the 50’s hits of the time “Mr. Sandman,” “Lollipop,” “Stupid Cupid,” and “Dream Lover” to name a few. Between numbers, we learn about the girl’s crushes, heartaches, wants and dreams, which were really rather simple back then. The audience votes for the prom queen voting — a hotly contested race. 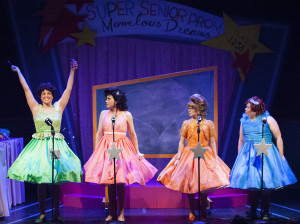 Act 2, brings us to their ten-year reunion and 1968. The group is back together again to perform. Riffs have broken them apart and each altered, but none more than Suzi, who is visibly pregnant and about to give birth. With a much better song list (I am not a fan of the 50’s songbook) that includes “Heatwave,” “Son of a Preacher Man.” “You Don’t Own Me,” “Leader Of The Pack” and more, we see the girls true personalities and learn how their dreams went a little askew. 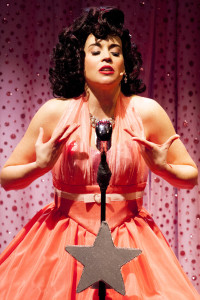 All four women have voices that blend beautifully, though Ms. Green has a tendency to sing just a little flat on her solos. It is Ms. Briar, who shines the most with her acting skills and vocals until Act 2, when Ms. Bianco cuts lose and joins her in the spotlight. Ms. Green comes off as so heartless, that we never really understand why these girls were ever friends, though she does have a fan base that is alive and well and in my audience. Ms. Schwab, a Beth Level look alike is a little clunky. 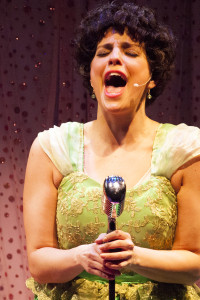 The musical direction by William Wade was spot on and he really had the four in perfect harmony. The choreography was nicely done, as was the set design by William Davis. The sound design by Mickey Bahr needs to be fine tuned as it is hard to hear the lyrics due to some fuzziness. The costume designs by Bobby Pierce are perfectly color coordinated. I loved the 60’s retro boots. 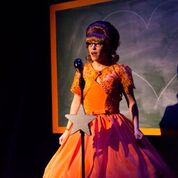 Created, written, and originally directed by Roger Bean, the previous New York production played at the West Side Theatre from September 2008 to January 2010. In this production the direction is by Tom and Michael D’Angora producing partners and spouses. Unlike other productions, this direction is on the cutesy side and again Ms Schwab is made to be like Marmaduke on stage, which is not flattering to the actress. Ms. Green could have used more warmth, so the audience at least likes her. It comes but a little to late.

The Marvelous Wonderettes is sure to entertain those who miss the 50’s and discovering the talent of Kathy Brier was a plus. I was already a fan of Ms. Bianco, who I wish someone would find a show for her to sink her teeth into.