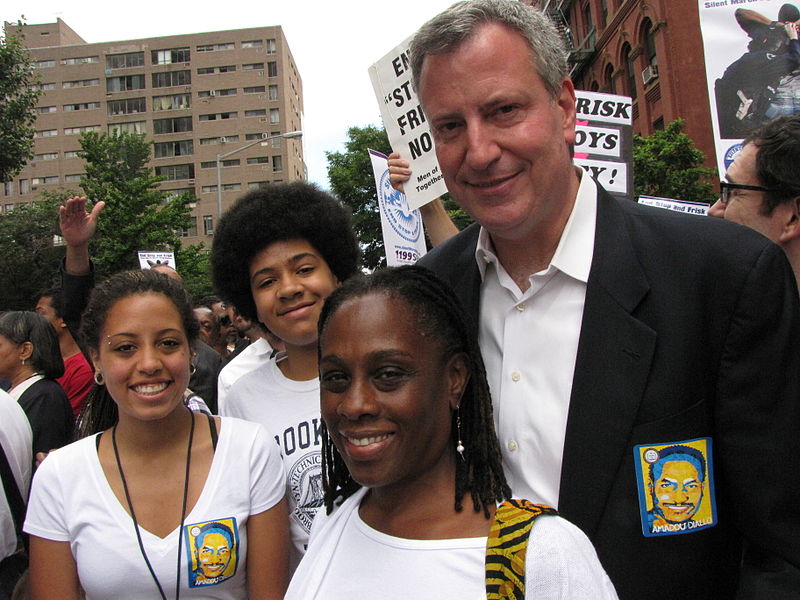 Chiara de Blasio, 25, was taken into custody around 10.30pm on Saturday night after cops infiltrated an “unlawful assembly” at 12th Street and Broadway in Lower Manhattan. This is where police cars were getting burned, stores being looted and people throwing objects and fighting with the police. There were thousands of people in that area and a police report obtained by DailyMail.com showed that Miss de Blasio was among the 100 protesters who were arrested.

Chiara was reported to have been released at about 8am on Sunday, receiving a desk appearance ticket. Were the other 99 people let out as well?

Chiara’s arrest came as the Mayor urged protesters to disperse and did not mention his daughter’s arrested during either of the two briefings he held Saturday night and Sunday morning.

This is not the first time the Mayor’s daughter has been in the news. She has struggled with drug and alcohol addiction and has been to several rehab centers.

De Blasio also suggested that the protests had been co-opted by “people who came to do violence in a systematic, organized fashion. They have come from outside of the cities. Samantha Shader, 27, of Catskills, NY, is charged with using a Molotov cocktail to damage an NYPD vehicle, with four counts of attempted murder. For a city in lockdown how did she get here? Others have raped banks, storefronts and destroyed vehicles. Graffiti now covers St. Patrick’s Cathedral, yet Mayor Bill de Blasio did not impose a curfew Sunday, unlike other major US cities, and smaller cities throughout the state. Organizers of certain anarchists groups sent out bail money, recruited medics and medical teams with gear to deploy in anticipation of violent interactions with police. One out of every seven arrests has been people from out of state.

345 people were arrested last night, yet originally the number was 730 three days before this was posted. 33 officers have been injured and 27 police vehicles have been destroyed. What are the real numbers? Why is this information being kept from us?

What started out as peaceful, turned violent once the sun went down in Times Square. Multiple arrests were made and several officers were injured at 41st and 6th Avenue, police said.

One has to wonder about the spread of COVID-19. It’s not about George Floyd anymore this is about destruction! They are using a man who died unnecessarily by a cop and using it to their advantage to destroy our towns, business and our homes.