David Ives likes to put his own spin on things. His latest is The Metromaniacs, based on Alexis Prion’s 1738 play La Métromanie. Done completely in rhyming couplets, it seems Ives’s is addicted to this style. His last two plays, The Liar and The Heir Apparent, struck the same cords. Knowing that Ives wrote the fabulous Venus and Fur, one wonders if maybe the present climate hasn’t spirited him away or at least the talented Red Bull Theatre Company. 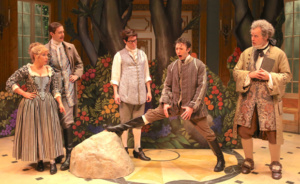 Back in France, poetry is all the rage and the country is addicted to this form. Set in the wealthy home of Francalou (Adam LeFevre), an amateur poet and a rather laborious playwright goes under the pseudonym of Mlle. Meriadec de Peaudoncqville because the poet, and publisher of the poet magazine, hates his writing, but loves his nom de plumes. He has derived a play to get his daughter Lucille’s (Amelia Pedlow) head out of poetry and into marriage. Francalou’s cohort is the feisty maid Lisette (Dina Thomas). Staying at the house is Cosmo de Cosmos (Christian Conn), poet and playwright, who is actually the poet Damis in disguise. Francalou despises Damis, but Damis is in love with Mlle. Meriadec de Peaudoncqville and has come to seek her out. When Damis’s valet Mondor (Adam Green), Dorante (Noah Averbach-Katz) – a dense suitor for Lucille – and Damis’s Uncle Baliveau (Peter Kybart) show up, all hell breaks loose. Mistaken identities endanger, as nobody is who they seem to be. In the end, everybody couples up, having a laugh in the process. 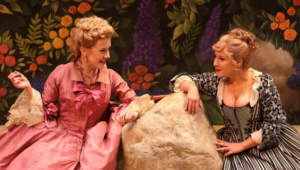 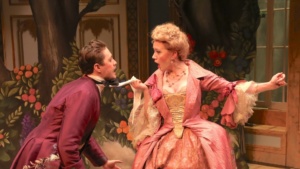 LeFevre is perfect as a stand-in for Voltaire, but it is Pedlow’s hair twirling Valley Girl sigh whatever-r-r-r, that make you chuckle. Dina Thomas nearly steals the show with her saucy maid, and Conn makes the perfect romantic lead. His scene with the physical Averbach-Katz is hilarious. Green gets a little annoying and Kybert manages to have his moments, with the nephew who thinks poetry is sublime. 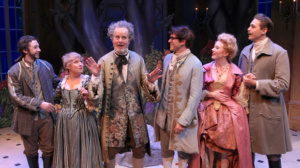 What stands out here is the fabulous direction by Michael Kahn. He keeps the laughs coming as he keeps the show running like a rollercoaster on speed. Kahn also manages to get the crispness of verse to a tee from all his performers. 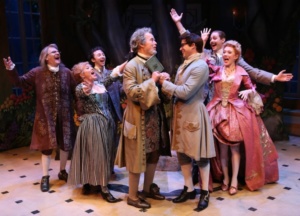 Ives’s sarcastic wit is enhanced by his wordplay that knows no bounds. He is truly a master wordsmith.

For an evening of confectionary fluff that is frothy and doesn’t demand much thought, The Metromaniacs is just what the doctor ordered.

Suzanna BowlingJanuary 18, 2023
Read More
Scroll for more
Tap
He Says: Children of a Lesser God A Bit Creepy in the Current and Modern #MeToo Moment
The Fairest My Fair Lady of Them All