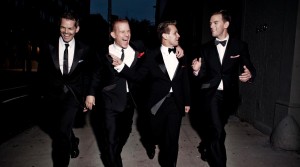 On Friday, May 20, 2016, 8pm at the Count Basie Theatre, 99 Monmouth St, Red Bank, NJ, the sensational Midtown Men concert reunites four stars from the Original Cast of Broadway’s Jersey Boys. Tony Award winner Christian Hoff, Michael Longoria, Daniel Reichard and Tony Award nominee J. Robert Spencer, star in this one-of-a-kind concert experience celebrating the music that defined the ’60s.
On Saturday May 21, 2016 they play New York at B.B. Kings at 8pm 237 West 42 St.
They took Broadway by storm in one of the biggest hits of all-time. Now on their 6th national tour, THE MIDTOWN MEN are bringing their magic to audiences everywhere, singing their favorite “Sixties Hits” from The Beatles, The Rascals, The Turtles, Motown, The Four Seasons and more.

These talented entertainers shared the Broadway stage for over a thousand performances in the mega-hit Jersey Boys. Now, as The Midtown Men, they’ve thrilled crowds on concert stages and symphony halls across the continent, and have delighted television audiences with performances on “The Today Show”, “Good Morning America,” “Access Hollywood,” “Katie,” and “The Chew.” The Men recently released their first radio single, “All Alone On Christmas,” written and produced by rock icon and Sopranos and Lilyhammer star Steven Van Zandt and backed by Bruce Springsteen’s E Street Band. They were honored to perform the song at the White House for the National Tree Lighting Ceremony in Washington DC.

In 2014, the group released their first public television concert special, The Midtown Men Live in Concert. Taped at the New Jersey Performing Arts Center’s majestic Prudential Hall, the program launched in the NYC area on NJTV and WNET in December 2014 and ran in markets nationwide throughout 2015. Their new PBS show, Meet the Midtown Men, goes behind the scenes and behind the songs to get an inside, up close and personal look at the Men and their music. It premiered in August 2015 and is currently airing in markets nationally.

Their recent show at NYC’s famed Beacon Theater was a sellout smash and featured guest stars Shirley Alston Reeves from the Shirelles, La La Brooks from The Crystals, Gene Cornish from The Rascals and Petula Clark, who had 3000 people up on their feet for “Downtown.”
The Men are pleased to announce an exciting new recording project– rock superstar Tommy James has invited them to be guest artists on his new acoustic album currently in production.