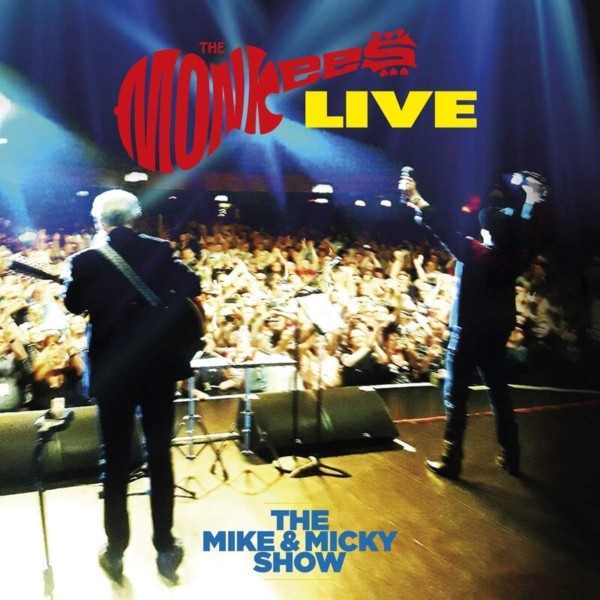 Hey, we’re gonna form a group–and they have!

First, silence. Then, slowly, a growing audience roar more than 50 years in the making is heard. Two singers shout out their own individual “Hello!” to the crowd, and the listener just knows this is going to be fun. Suddenly, the classic Fender Telecaster-driven arpeggio riff that opens the 1966 #1 single “Last Train to Clarksville” is played, and a band every bit as strong and secure as the recording industry’s legendary studio backing group “The Wrecking Crew” kicks in. The Monkees are back, and the new concert album “The Mike & Micky Show Live” (Rhino Records) proves it beyond all form of mortal measure.

Speaking of mortality, the ongoing evolution of this band has in some ways devolved—from four members down to two. Both song and dance man Davy “Manchester Cowboy” Jones and the multi-instrumentalist soul of the original group, Peter Tork, have shuffled off their respective mortal coils—Jones in 2012 at age 66 following a sudden massive heart attack, and Tork from a long bout with cancer that claimed him only a few days after turning 77 last year.

For these two aging hipster septuagenarians, naysayers might say it’s accomplishment enough if they are merely able to finish any of their concerts with their pipes—and their reputations—intact. The sheer beauty, however, of this new live album—recorded during last year’s successful U.S. tour—is just how strongly Messrs. Dolenz and Nesmith have emblazoned excellence, and even transcendence, upon their band’s legacy for all time.

Produced by longtime Monkees archivist Andrew Sandoval (whose name has been synonymous with all things Rhino practically since its inception in the late 1970’s) and featuring a pristine mix by none other than Nesmith’s eldest son Christian Nesmith (who also back-up sings and plays guitar in the group), this new release is that definitive “top-of-the-line” live concert album recording that The Monkees have never truly been able to deliver—until now. Prior to this point, the only major label concert release for the “Pre-Fab Four” was the 1987 release, Live 1967—followed in 2001 by the more extensive four-disc box set Summer 1967: The Complete U.S. Concert Recordings. More a fanboy curiosity than a truly enjoyable concert album, the soundboard recordings from those 1967 shows are historically significant because they capture the group—basically thrown into a massive concert tour in support of a hit TV show, with only a few weeks’ rehearsal in addition to all-day-long TV episode shoots followed by evening recording sessions—trying their best to sound like The Wrecking Crew band on their records (not then possible), while also doing their best to sing the songs’ vocals (thanks to the screaming teenage crowds, not then audible).
A lot has happened, though, since those primitive-sounding concerts from the 60’s. Armed with their own superior musicianship and remarkable shared stage presence, both Dolenz and Nesmith emerge in this concert album as exemplars in the art of show and their show of art throughout this remarkable performance. Backed by a super-tight live band, driven by drummer Rich Dart’s phenomenal backbeat throughout—as kick-ass rockin’ on the Nesmith-written “Mary Mary” as it is light and playful on the Nesmith-sung “The Door Into Summer—we have here a selection of songs guaranteed to please the first-time and “hit songs only” fans just as much as the “deep tracks” crowd who have impassioned debates about which of the two versions of “She Hangs Out” is the superior take (for myself, I think the far funkier version on the Pisces, Aquarius, Capricorn, & Jones Ltd.  album is better than early-days producer Don Kirshner’s initial version briefly released as a “Canadian market-only” 45 RPM flip side to “A Little Bit Me, A Little Bit You” before Nez and the boys insisted it be replaced with the Nesmith-penned “The Girl I Knew Somewhere”).

Speaking of “A Little Bit Me, A Little Bit You,” it’s one of only two Davy Jones-sung songs—the other being, of course, the obligatory “Daydream Believer”—in this entire set list, both ably covered by Dolenz. In addition to time being the best measurer of The Monkees’ true value and talent as one of America’s best hit-making bands of the 1960s, time has also revealed Micky Dolenz as “the” singing voice of The Monkees. He’s there on lead at the show’s start with “Last Train to Clarksville,” and he’s there to sing us into the finale with “I’m A Believer”—and he still performs all of these songs he has sung in their original keys, something that further defines him as one of rock ’n roll’s best singers.

Nesmith, who only officially returned to the world of live Monkees shows again after years away starting back in 2013, has things both ways on the songs he sings. Some, like “My Sunny Girlfriend” or “You Just May Be the One,” are sung in the original key; others, like “Papa Gene’s Blues” (tucked into the “acoustic section” of the evening) or “Sweet Young Thing,” are pitched a little lower to better suit those contours and shadings more evident in the slightly older—and, to believe the man from his 2017 autobiography Infinite Tuesday, wiser—tenor of his baritone voice (talk about duality).

The real magic of the album, though, and of the “Mike & Micky” live shows, are those songs that have either never been done before live—for example, “St. Matthew” or “Auntie’s Municipal Court,” both from their often-underrated fifth album The Birds, The Bees & The Monkees (1968)—or those songs from the band’s newest—and, according to some, their best—album, aptly titled Good Times! released in 2016 on the fiftieth anniversary of the band’s TV show and debut album. Both the psychedelic-rock homage of “Birth of an Accidental Hipster” and the tender lyricism of “Me & Magdalena” from this twelfth Monkees studio album benefits as performed here from the Dolenz and Nesmith magic—first in a call-and-response fashion, then in the harmonious blend of two long-singing and still-standing brothers. When Papa Nez tells the audience in a sweet moment of the album before the short acoustic set that he’s “never enjoyed working with anyone as much as Micky,” all true Monkees fans will likely find themselves close to shedding a tear—only to then be led into laughter when Micky drolly responds to Nez, “I never enjoyed working with anyone as much as me, too!” It’s then you realize you are sharing time listening to two friends who also happen to be Monkees.

Though nearly all the song’s performances here in this concert are virtually note-for-note from the original recordings (including a version of “The Door Into Summer” set to become a hit track during the upcoming Summer of 2020), the song that, for this reviewer, actually improves in live performance beyond the original recording is—without question—Nesmith’s track, “Tapioca Tundra.” The slightly slower arrangement of the song on this live album allows for a much better evocation of Nez’s words and themes. On this version, you can really hear the song’s dreamlike lyrics; and its images come to life a little more readily in the listener’s mind. Furthermore, the song’s tempo as originally recorded back in 1967 now feels a bit disjointed and uncomfortably hurried by way of comparison. Something slower and softer wins the game—even in rock music.

While it’s true the album sounds so much better than any previously recorded Monkees live shows (at times perhaps too much better, occasionally sacrificing spontaneity in place of sonic clarity), it also feels like something is missing from this musical Monkees missive—some essential element from the original blueprint that I believe far too many have lost sight of all these years. For this reviewer, what’s missing is the presence of Peter Tork. Great as this recording and the “Mike & Micky” concert experience itself is—and will be again, as recently cancelled dates are being rescheduled to later this year, after we have hopefully beaten down the COVID-19 curve—listening to this album of performed-live Monkees music feels a little like watching a Marx Brothers movie that doesn’t feature the rascally and beatified Harpo in the cast.

Make no mistake, “The Mike & Micky Show Live” is a splendid live concert album and I think it should forever put to rest the notion that The Monkees were ultimately unable to cut the mustard as a viable music group on their own. Not so—there is a rich collection of twenty-five (25) performances here, each of which have the makings of a bountiful meal of music. In the end, though, what’s missing on the listener’s fork is Tork—and when you hear this group’s performance of Nesmith’s raucous 1968 rocker “Circle Sky,” it captures briefly the spirit of the original band onstage together as they figured out together what they were as a group and who they were to each other in that permutation. Tork often told the story of how—in the middle of a 1968 Monkees concert they were performing live in Osaka, Japan—Davy came over with maracas in hand to Peter, thumping away on his bass, and shouted into Peter’s ear above the loudness of the music and the crowd, “Hey, we’re gonna form a group!”

That small but fervent moment—Peter’s winsome dream that The Monkees would evolve from “make-believe group on TV” into a real-life group, just as had first been achieved on the group’s third album, Headquarters, back in 1967—has now come around full circle. Or, better yet, full “Circle Sky,” since I have a real feeling that Davy and Peter are looking down from up in the sky at this new record—and the feeling now is that, with “The Mike & Micky Show Live” captured and recorded for posterity, that “group” sweetly joked about by Peter and Davy back in ’68 has finally and irreparably been formed. When you get to hear this exquisite concert album, I think you’ll feel the same way. This is one for the ages—just as The Monkees have always been.