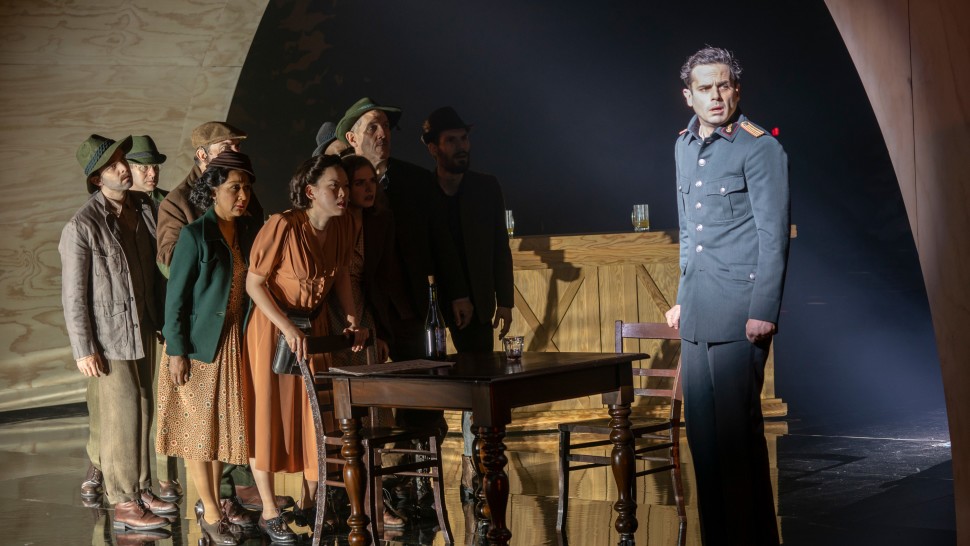 Judgment Day, a German morality play, translated by Christopher Shinn (Dying City) is overblown and in a sense underwhelming. This small play is dwarfed in this oversize production, so that it leaves you scratching your head in the end.

The staging is about moving vast amounts of set, as the actors run around it like athletes in a marathon. Yet, English director Richard Jones gets some lovely performances out of his actors and creates a moment frozen in time.

Judgment Day was written during the rise of the Nazis, and weighs in the guilt of the innocence verses the mob mentality.

We begin at a small-town train station run by the highly respected and a super-eﬃcient German stationmaster Thomas Hudetz (Luke Kirby). Here the town gossip Frau Liemgruber (Harriet Harris) tells tales about Hudetz’s miserable wife (Alyssa Bresnahan). The play is steeped in guilt. Hudetz, is responsible for a fatal train crash when he is diverted from duty by a stolen kiss from Anna (Susannah Perkins), the innkeeper’s daughter. At the investigation, Anna perjures herself and is believed; Hudetz’s embittered wife, who saw the whole incident, tells the truth and is reviled. But actions have consequences; when Hudetz returns home to a hero’s welcome, he and Anna are tormented by their shared past and, in a fateful encounter under the railway viaduct, by the need for judgment. As the townspeople once believed Anna and the stationmaster, the tables turn and they become the shunned and reviled.

The play is directed like a German Expressionist painting. Paul Steinberg’s massive, rolling set pieces are like a character in this show. The 16-member cast race with agility as black silhouetted trees thanks, to the lighting of Mimi Jordan Sherin, shimmer bearing witness, as Daniel Kluger’s sound design feels like we are caught between worlds forever haunted.

In the end it is only the stationmasters wife’s brother, a chemist (a wonderfully layered performance by Henry Stram) who keeps his integrity and gives us hope for humanity.

Suzanna BowlingAugust 3, 2022
Read More
Scroll for more
Tap
“Halfway Bitches Go Straight to Heaven”, but Not Before They Have Their Say
The Land of Forgotten Toys The Musical – Let’s Hear It For The Girls