The Mother of Invention The Question Of Life

The Mother of Invention The Question Of Life 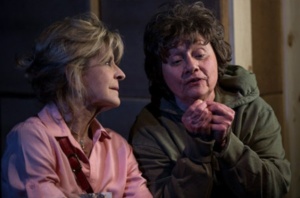 Concetta Tomei and Dale Soules All photo’s by Maria Baranova

Alzheimer’s, old age, euthanasia, family dynamics and memory are all a part of James Lecesne’s new play The Mother of Invention, which opened last night at the Abingdon Theater. 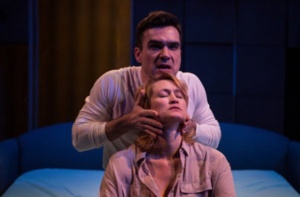 Dotti (a wonderful Concetta Tomei) wants a say in her life, even though she has developed Alzheimer’s. Her daughter Leanne (Angela Reed) has already shipped her off to her sister’s, before she is moved into an assisted-living facility in Arizona. Even though Dottie is not there her voice still plays in Leanne’s mind. She has been boxing up and selling off her mother’s possessions, while carrying on a on affair with a man her mother has given a great deal of money too. Her brother David (James Davis), has written a novel killing off his mother. He also has a secret, which he is reluctant to share. He resents the fact his mother has given money to the rather hunky Frankie Rey (Dan Domingues) and wants him to return it. In the meantime the noisy neighbor (Dale Soules) wants to not only buy up Dottie’s prized possessions; she is also obsessed with air quality. Also Leanne’s 13-year-old daughter (School of Rock’s Isabella Russo) may just see more than all the adults put together. 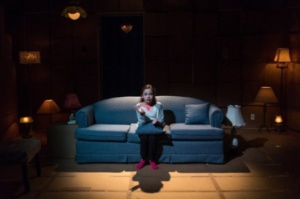 The siblings have conflicting memories of their childhood. It seems Dottie was not the best Mother. She locked her kids outside in the freezing cold and hit them. To David it was a beating and to Leanne it was hitting which “is different.”

As the packing continues more secrets are reveled, as they realize they might not have known the whole truth.

Dale Soules gives a rather humorous portrayal of an obsessed neighbor, but is touching as the homeless woman Dottie meets in her travels. The siblings weren’t strong enough and Mr. Davis seemed a little too whiney. Domingues is definitely eye candy, but this show is Ms. Tomei’s who makes us see and care about this souls life. Throughout the show Dottie has a running commentary with the audience. It is humorous, sarcastic, bitting and insightful.

James Lecesne’s writing is funny and touching and though The Mother of Invention is not as good as The Absolute Brightness of Leonard Pelkey, this play has merit and a lot to think about.

Jo Winiarski’s set is highly clever where boxes make up the walls and they are gradually taken away, as the secrets come to light.

Director Tony Speciale, allows us to see the moments of life, we think we know, but it turns out that time has rewritten. We don’t always remembered the past correctly, if we did maybe we would not repeat mistakes.

In the end the question of what is the quality of life and who gets to make that last decision for us is at stake. Is loving someone helping them, let go with dignity?