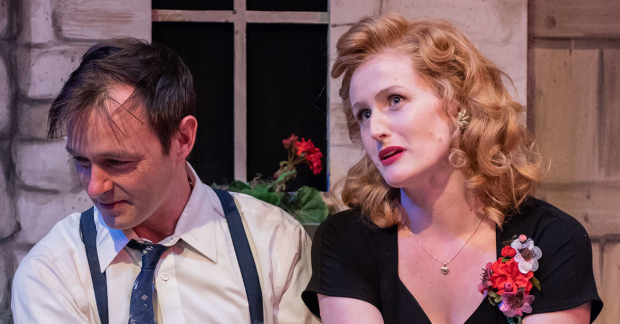 Morality plays were a genre of theatrical entertainment, in which the protagonist is met with moral attributes, who try to prompt him or her to choose a good life over one of evil. Mostly religious based, they started to die off and for good reason. Micheál mac Liammóir’s 1948 American Premiere of The Mountains Look Different now playing at Theatre Row (410 West 42nd Street) and produced by the Mint Theatre is well done, but seems lost in translation.

Much like Anna Christie, Bairbre ( Brenda Meaney) has spent thirteen years working the streets of London. She longs to change her past and live a simpler life. She has returned home to Ireland, married to Tom Grealish (Jesse Pennington), who thinks she is is pure, as she is beautiful. Thought the two have been married three days, Bairbre has not slept with her husband. They arrive at Tom’s father’s Martin’s (Con Horgan) farm where it turns out, he was one of her customers one night. One he regrets due to his Catholic upbringing and one he longs for again. His bitterness and unwillingness to let Bairbre start again is a recipe for disaster with an ending that just seems pointless.

The cast is terrific, especially Meaney. Your heart breaks for her as the menacing Horgan goes for the jugular. I also liked the performance of Batty Wallace (Liam Forde), but he seemed under utilized.

Aidan Redmond’s staging doesn’t help the plays flaws, nor does the set by Vicki R. Davis’s. Though beautiful, the mountains should stand out. Christian DeAngelis’s lights illuminate the nights passing.

It took The Mountains Look Different 71 years to get its premiere but it’s time has passed.