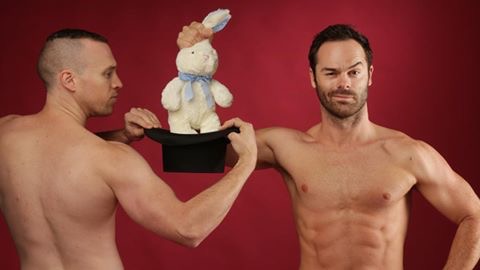 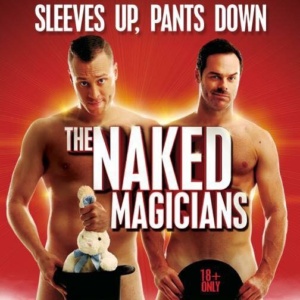 “You ready for some sexy-ass magic?”  So began an evening of mirth, mystery and skin.  Lots and lots of skin. Blending the world’s second oldest profession, magic, with nudity proved both promising and playful. Oh so playful.  The magicians in question are Mike Tyler and Christopher Wayne, two handsome and extraordinarily body confident Australians, better known as The Naked Magicians.  These lusty lads are producing tricks for a captivated Windy City audience for just one week only. Staged at the Broadway Playhouse at Water Tower Place, this adults only show proved naughty could be oh so nice. Both men have winning personalities predominately on display during their brisk 90 minute show.  Ditching the capes and hats of traditional magicians, they also ditched a great deal more than that too. Ending their show in the buff, “you won’t see this at Chris Angel” the duo quipped.  Mike Tyler is the magician with the dark, scruffy beard and Christopher Wayne is the one with the surprisingly long and agile tongue, rivaling KISS front man Gene Simmons in shock value.  Repeatedly arching his eyebrow while making eye contact with audience members in the first few rows, this scamp was decisively there to play. 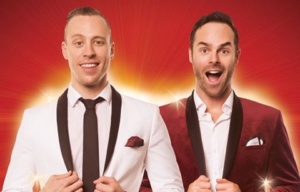 Starting the night fully clothed, Wayne chided, “you’ll  have to work for it” to an audience anxious to see some skin.  Speaking of the audience, do come to play because this is a show where audience participation is absolutely required.  Starting with a giant blow up penis balloon tossed spiritedly into the crowd, the first act was all about the audience.  “Good magicians don’t need sleeves and great magicians don’t need pants” exclaimed Tyler as, somewhere in between,  he removed his shirt.  Bringing a willing participant onto the stage named Erin, who, as it turned out, worked for Broadway in Chicago in their payroll department, she was having a “girls night out” with her mother.  Blindfolded, Erin’s mother got an earful of outrageous antics, while the magicians did a meticulously choreographed bump and grind lap dance routine for and on top of Erin. Channing Tatum’s Mike could only wish to be that magical. 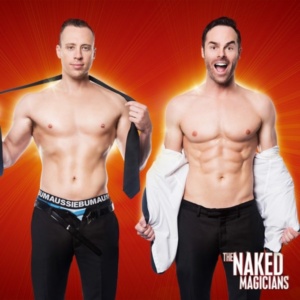 The remaining act was filled with adult themed fun, including snapping dick pics on audience volunteer’s cell phones, a staged blow up doll hiding a cell phone in an unexpected orifice, nimble scissor clipping magic, additional card tricks with an audience member, and booty, booty, booty. Before losing all of their clothes, the traditional magician’s straight jacket escape routine.  In Aussiebum men’s bikini briefs no less.  One, a traditional straight jacket, the other a “gay jacket” embellished with glitter and feathers making it  “a little more fabulous.”  These randy rascals were here to regale an audience full of straights, gays and everything in-between.  Who could have guessed combining magic and nudity would be so much superfluous fun. No heavy drama necessary and none required.  Pick up one of the signature cocktails sold at the bar before the show begins and head in to enjoy all that is The Naked Magicians.  Their stay in Chicagoland is short-lived, so catch this act before, like their clothing, it disappears. 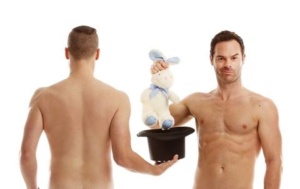 The Naked Magicians are now playing through March 19, 2017 at the Broadway Playhouse at Water Tower Place.

He Says: Arthur Miller’s The Price: In the Style of a Better Miller
The WinterFest Where Young Talent Was The Winners And Gudrun Buhler Took Home Three Awards