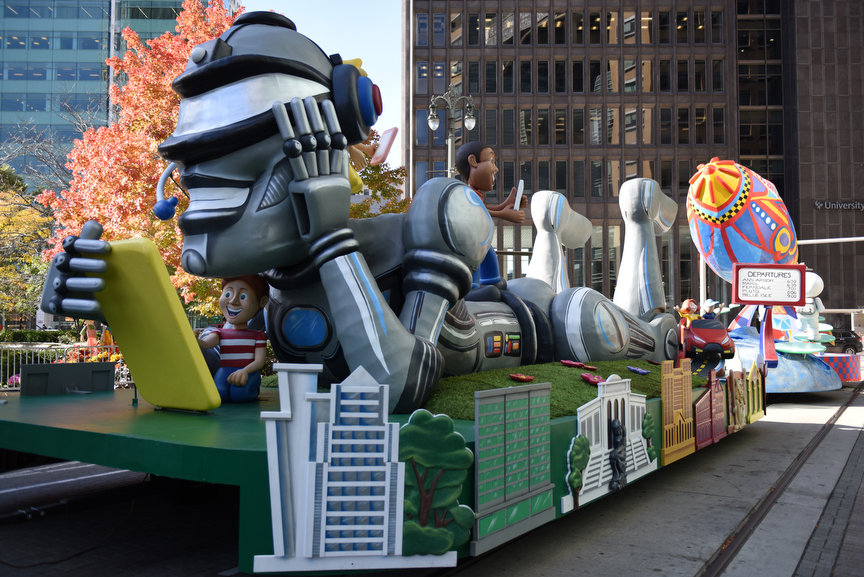 The New Floats and Balloons At Macy’s Thanksgiving Day Parade

The New Floats and Balloons At Macy’s Thanksgiving Day Parade 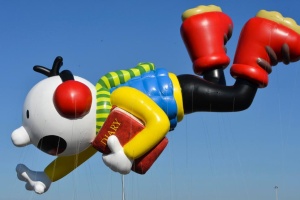 Diary of A Wimpy Kid book series has 180 million copies in print globally, as well as the 20th Century FOX film series, and is now flying high in this years holiday procession. On Thursday, Nov. 24, more than 3.5 million spectators and more than 50 million with television and Youtube viewers will marvel as Greg Heffley makes his first chilly flight. Accompanying will be award-winning author Jeff Kinney, who is expected to help guide the new balloon down the streets on his global tour in support of the new book.

In keeping with his trademark clumsy nature, Greg Heffley will clutch his most prized possession.

Greg is ready for the winter decked out in red snow boots, blue puffer coat, red ear muffs and a green/yellow striped scarf with his arm outstretched to break his fall. The balloon is 62-feet long, 32-feet wide and is 62-feet tall. The original balloon, modeled after the black and white version of Greg, debuted in the Macy’s Parade in 2010 and flew until last year. 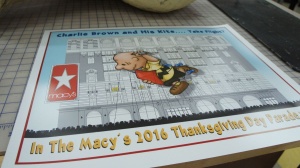 A brand-new Charlie Brown balloon was designed to celebrate the upcoming 50th anniversary of the Peanuts’ musical You’re a Good Man Charlie Brown. The Peanuts franchise also recently celebrated the 50th anniversary of A Charlie Brown Christmas. After years of Snoopy being on MetLife ‘s payroll, the company gave the beagle his pink slip. When the insurance company debuted Snoopy more than three decades ago, Snoopy helped MetLife differentiate themselves to consumers. In short, one silent dog made the company more human. Well the company may just have ruined there reputation over that. 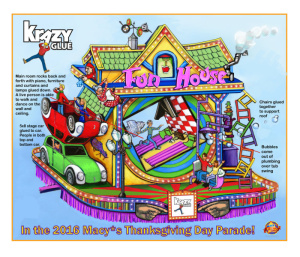 Upside down cars, teetering towers of chairs, furniture glued to the ceiling and other extraordinary demonstrations of the Krazy Glue brand’s strong adhesive ability will come to life aboard the new Krazy Glue float. Called “Fun House” the float displays loads of kraziness.

The Fun House float will stand more than three stories tall and will be a manifestation of the unbelievable things that are possible with Krazy Glue. Inside the fun house, the main room will rock back and forth while a chandelier, piano, tables and chairs are glued to the walls and ceiling. Outside, life-sized cars attached by their roofs, piles of dishes stacked to unbelievable heights, and a tower of chairs glued together at odd angles will wow spectators. Escorting the float will be a party of carnival performers, including a strong man lifting a colossal weight over his head, acrobats demonstrating impossible gymnastic feats, and street artists balancing enormously tall stacks of plates and hats. 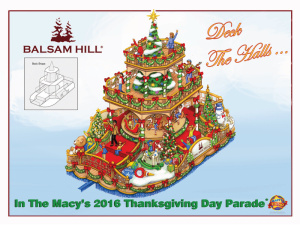 To celebrate its 10th anniversary, Balsam Hill is partnering with Macy’s to debut “Deck The Halls,” a wondrous float bringing the magic of Christmas to life in the 90th Anniversary Macy’s Thanksgiving Day Parade. As part of the 10-year celebration, Balsam Hill is giving away a trip for four to New York City to attend the Parade and witness the float make its debut. Standing more than 30 feet tall, Balsam Hill’s “Deck The Halls” will embody all that is Christmas – from toys and decorated trees to entertainment and joy. Modeled after the traditional wooden pyramid, each of the three levels are hand-carved and hand-painted by the Macy’s Parade Studio to encapsulate different aspects of the holiday season enjoyed around the world. At the base of the float, multiple Balsam Hill trees will be adorned with stunning decorations in different styles to showcase a host of family traditions.