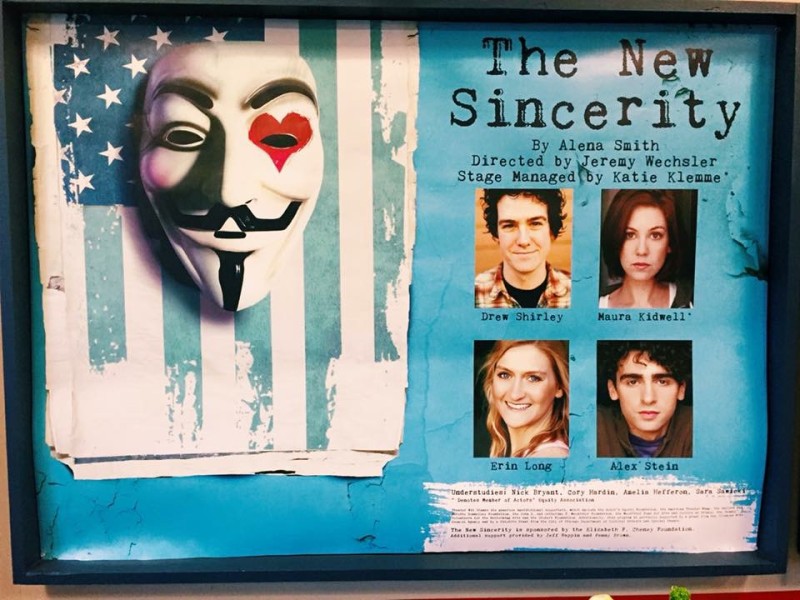 The New Sincerity- Occupy This!

The New Sincerity- Occupy This! 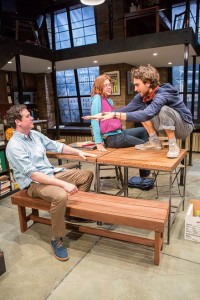 Directed by Jeremy Wechsler, the Windy City premiere of playwright Alena Smith’s witty comedy, The New Sincerity, impressed. Set in 2011 New York City, this satirical gem delicately balanced office romance, personal and political ideologies, and sexual tension against an Occupy-style protest movement. Completely submerged in the wondrous world of the Millennial age bracket, without being off-putting to Generation X or the Baby Boomers who will most likely be filling the seats in the audience. Theater Wit has another edgy and poignant hit on their hands. The four person cast trading intellectual zingers at rapid-fire pace. This 90 minute sardonic whirlwind proves itself a comedy with affecting authority. 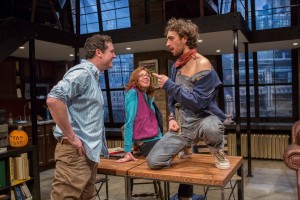 The story centers around journalist, Rose Spencer (highly likeable Maura Kidwell) just promoted to primary contributor of the new literary journal “Asymptote.” Her work space is the impressive loft of her editor, Benjamin (Drew Shirley) affluent, awkward yet handsome, desperately wishing to be cutting edge and hip, but so missing the mark. Rose is obviously attracted to him, however he has a fiancé, conveniently located in Europe, prepping for her next book tour, so their intellectual sparring is the only intercourse in which they currently engage. Let’s call Rose Ben’s “Work Wife.” Adding multiple laughs and an unpretentious air, the wacky intern,  Natasha (Erin Long) who is not so secretly hoping Rose steals Ben from his finance. Deeming herself the Captain of #TeamRose, and interjecting lines like “his ear gages are huge. You could put carrots through there” Natasha interjects an uncensored and whimsical sensibility, with the randomness of a stream of Facebook Status updates or a quick Snapchat. Nat purposely speaks in short, tweet worthy, one-liners of a self-appointed, savvy, social media queen. Watching Long work, I was reminded of a young Annaleigh Ashford, from her wide-eyed, overly exaggerated surprised facial expressions to the nasal delivery of her lines. I will be keeping an eye on that one. Rounding out the quartet, Djengo (Alex Stein) a scruffy yet handsome member of the “movement” that Rose meets, interviews, and then dates. Walking the thin, delicate line between sincerity and self-promotion, Rose becomes as enamored with writing about the rise of the movement as she does with individual movement member Djengo, himself. 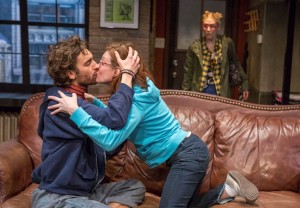 Benjamin is at first furious with Rose for covering the Occupy movement. Launching this new magazine and having to answer to financial backers, he is concerned Rose has pigeonholed “Asymptote” with her personal political agenda. As he immersed himself in the political upheaval, Ben begins to define himself through the defiant and disobedient company he keeps. When Ben pushes Djengo for an exclusive interview for the magazine and suggests he be the “face” of the movement, Djengo replies “Protest is anger. We are creating an action.”  The “collective effort isn’t about us.” Unsatisfied with that as an answer, after all, CNN has to interview someone, Ben inserts himself as the rebellious face of the movement, much to Rose’s vexation. All comes to a head the night of the December 2011 Black Tie Event honoring the “leaders” of the movement. “A Black Tie Event?” Rose questions, wondering why the 1% is pretending to honor the 99% at all? The ever adjusting sexual tension(s) played remarkably real and relevant through all four actors. There are a few curve balls and surprises thrown in the rom-com mix, but I do not wish to spoil everything. Let’s just say, everyone walks away a little dirty as allegiances continually shift. 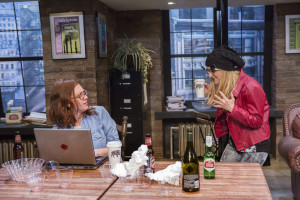 The two story, visually striking, fully functional, loft set designed by Adam Veness will impress even the casual theater goer. For the Wit’s storefront venue, this was incredibly detailed and worth noting. Izumi Inada’s real world costuming and Sarah Hughly’s emotive light design enthralled as well. Where does the individual begin within the amalgamation of coupledom, or in a working environment, or swept up in a generational civil action? Rose’s frenzied juggling act between politics, ambition and love are at the very core of this delicious and captivating new play. Smith’s sharp, rebellious, satirical writing style will delight while it engages. The New Sincerity, with its brazen, uproarious earnestness and unapologetic sexual one-upmanship, entertained from beginning to end. 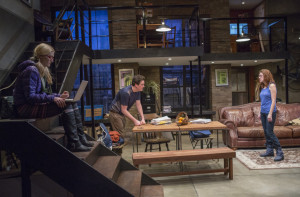 The New Sincerity is currently playing at Theater Wit through April 17, 2016.