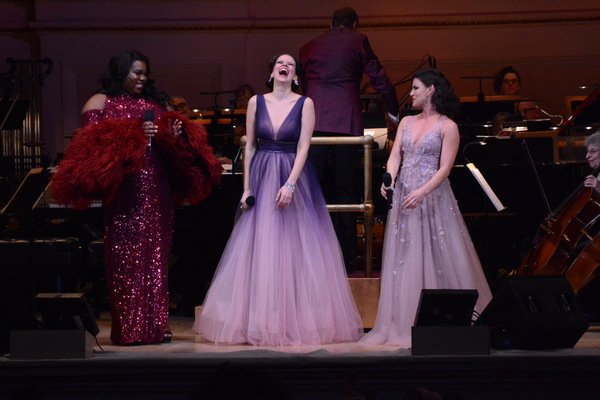 Valentine’s Day came alive with The New York Pops, Mandy Gonzalez (Hamilton), Carrie Manolakos (Mamma Mia!), and Alex Newell (Once On This Island). This one-night only concert I’m Every Woman: Divas On Stage was a spectacular salute to the power of the female voice, paying tribute to Aretha Franklin, Whitney Houston, Barbra Streisand, Adele, and more. This concert marked the Carnegie Hall debuts for both Gonzalez and Manolakos.

The Pops started out the night with a Diana Ross medley called “I Hear a Symphony” and indeed we did.

Not forgetting her roots and sending a love song to the audiences the Gershwin’s “Someone To Watch Over Me” was beautifully sung.

Glee’s Alex Newell, showed off his belt in I (Who Have Nothing), as he glittered and shimmered.

Newell’s fun side came with the song energetic “Think”.

The surprise of the night for me was Carrie Manolakos, who also looked beautiful as she sang a powerful rendition of Joni Mitchell’s “Both Sides Now”.

Next up was a heartfelt Dolly Parton tune “”I will Always Love You. This girl has soul.

Joined by Mandy and Alex, the trio gave us an upbeat (You Make Me Feel Like) A Natural Women”, as Act One ended.

The pops came back with the drum driven Gloria Estefan and Enrique Garcia song “Conga”.

After the intermission in new gowns the trio expressed the All Green hit “Let’s Stay Together”.

Carrie’s gowns were all found by Steven Reineke ‘s husband Eric Gabbard. It’s a shame the Tony’s don’t use him to dress the nominee’s. If he and Mandy Gonzolas’s stylist joined Anna Wintor, the Tony’s could beat out the fashion of the Oscar’s.

We learned about Mandy’s fight with breast cancer, as she sang the Titanic hit “My Heart Will Go On”. Not only did she look fabulous, but her essence was shinning through and our hearts went out to her.

The kids in the balcony had a fabulous night, as did all of us in attendance.

Carrie joined Mandy for a phenomenal version of the Barbra Streisand and Judy Garland hit “Happy Days Are Here Again/ Get Happy”. Interestingly Mandy has the same resonance as Ms. Garland.

Mandy and Carrie had a another dress change and again FABULOUS!!!!!!!!!

Carrie treated the audience to one of her original songs “The Nothing”, which I found a video of and am sharing. This song made me want to know so much more from this artist.

Carrie was joined by Alex for Stephen Schwartz’s Prince of Egypt anthem “When You Believe”. This song was made famous by Whitney Houston and Mariah Carey.

Alex showed off his skill with an emotional “And I am Telling You I’m Not Going” from Dreamgirls.

As an encore the Pops, Mandy Gonzalez, Carrie Manolakos, Alex Newel had the audience dancing with the Whitney Houston hit “I Want to Dance With Somebody”. Carnegie Hall never looked so joyous!

This Valentine’s Day special performance was a once in a lifetime only event. The New York Pops has been getting better and better and they are nights that set your heart and your soul to soaring. You can catch more of the New York Pops on March 27th when the Pops celebrates the music of John Williams.

Tony nominee Norm Lewis (most recently seen on Broadway in Once on This Island) singing selections from his career on stage, including lead turns in Les Misérables, The Phantom of the Opera, Porgy and Bessand Sweeney Todd.

Tony nominee Denée Benton (Hamilton, The Great Comet) will join Corey Cott (Bandstand, Newsies) and Judith Clurman’s Essential Voices USA for This Land Was Made for You and Me. Scheduled for November 13, 2020, the concert will salute the songs that have defined America throughout the past and present, while honoring the artistry that will shape the nation’s future.

Two-time Tony nominee Laura Osnes (Bandstand, Cinderella) will ring in the holiday season with the concert Merry and Bright on December 18th and 19th.

Suzanna BowlingFebruary 5, 2023
Read More
Scroll for more
Tap
The Glorious Corner
Louis Rosen I Don’t Know Anything: An Album in Three Acts Brings Back Music That Says So Much