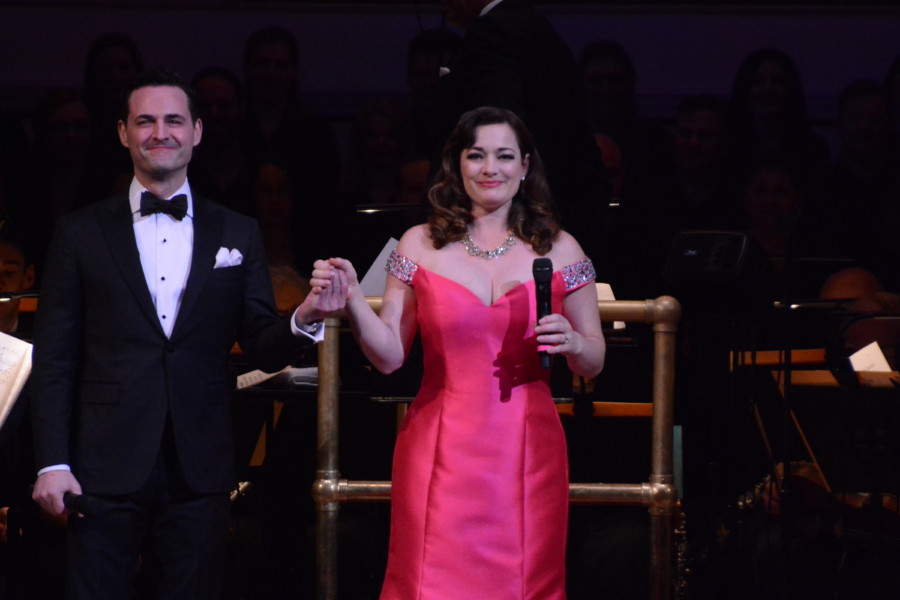 Just before the penultimate song of the evening, Broadway star Max von Essen takes an impromptu moment to state, “This is the greatest night of my life.” He explained that to sing with the New York Pops lead by Music Director and Conductor, Steven Reineke and to share the stage with Olivier Award winning performer, Laura Michelle Kelly and the over 50 member vocal group, Essential Voices USA, at Carnegie Hall was not something he had ever dreamed. The audience applauded with agreement.

To walk into the legendary Carnegie Hall, to look at the stage and find a sea of beautiful string instruments crowned by three tiers of a choral singers is overwhelming before the first note is heard. On January 24 at 8PM the first note was that of the overture of the motion picture version of Oklahoma! and the world of Rogers and Hammerstein came to life.

Steven Reineke informed his audience that R&H had eleven collaborations ranging from stage, screen and television and we were to experience them all chronologically across their careers. Oklahoma!, the ground breaking musical was their first and the overture was followed by Mr von Essen singing Oh What a Beautiful Mornin’ and then partnering with Laura Michelle Kelly to duet for People Will Say We’re in Love. Mr von Essen, Tony nominated for An American in Paris and who I feel was the best Migaldi I’ve seen in the 2012 revival of Evita, was given the opportunity to portray many of R&H’s greatest characters. I looked forward to seeing Ms Kelly, who won the Olivier Award for Mary Poppins, take on the R&H canon including the Sound of Music, a role also originated by Julie Andrews.

Carousel was up next, which Mr Reineke informed us was Mr Rogers favorite of his collaborations.  The New York Pops performed the Carousel Waltz so successfully that if you closed your eyes you could feel yourself on those wooden horses swirling around and with every clang of a cymbal you felt like you were actually reaching that brass ring. Max sang, in my opinion one of the more difficult songs written by R&H, Soliloquy beautifully with passion. For You’ll Never Walk Alone Ms Kelly’s beautiful voice joined Mr von Essen and the Essential Voices USA were able to shine as they brought the song to an inspiring climax.

Essential Voices USA continued to please the audience with It’s a Grand Night for Singing from the duo’s first foray into film, State Fair.

Allegro may have been R&H’s first unsuccessful venture (I will not call anything they did a flop) but when Ms Kelly sings The Gentleman is a Dope, you can still see the genius and the humour of these two greats.

Mr Reineke informs the audience that You’ve Got to Be Carefully Taught from South Pacific is his favorite R&H song as the lyrics clearly tell us that bigotry is not born into us but learned. Mr von Essen conveys that message beautifully. Max returns before intermission to sing the iconic Some Enchanted Evening but not before Ms Kelly gleefully sings A Wonderful Guy accompanied by the Women of Essential Voices USA. A wonderful song for her to sing as she clues the audience in that it was a year ago she was married not on Bali Hai but in Hawaii and that she is now a proud mom.

Act 1 ended with There’s Nothin’ Like a Dame. In the program only The Men of Essential Voices USA are credited and while of course the solo lines and some of the chorus is performed by the men, I was blown away when the only women sang the chorus of the song. I don’t think I had heard only women sing the words ‘there is nothin’ like a dame’ and the female voices created a brand new version to a classic song.

The King and I opened Act 2 and the New York Pops chose the most recent Lincoln Center version of the Overture. It was a wonderful choice and reminded me that we should be grateful that that production has been filmed for many future generations to see.

Laura and Max continued the songs of The King and I with a beautiful duet of I Have Dreamed. Both have beautiful voices and matched each other throughout the night and never overwhelmed the other in any of their multiple pairings. Essential Voices USA returned with I Whistle a Happy Tune, beautifully sung and equally well whistled.

The next two songs were from two of R&H’s less successful musicals: Me and Juliet and Pipe Dreams. No Other Love from the first of these musicals was again performed as a duet of the evening’s wonderful performers. Mr Reineke informed us that Perry Como had a hit with this song and I could not picture him topping the performance of this pair. (I looked up his version on the internet – sorry Perry – I was right). Pipe Dreams was not a hit and explained by Mr Reinke that the cause was probably more due to the ambiguity of the lead female character’s profession than the music. Laura Michelle singing Everybody’s Got a Home but Me proved that the musical genius was still there.

Cinderella was written by R&H for television in 1957 and starred Julie Andrews. The Pops performed the Cinderella Waltz from this show. As I listened to this waltz, I was amazed that the music for waltzes could be so different depending on why it was written. Unlike the Carousel Waltz where you felt you were on a merry-go-round, the Cinderella Waltz transports you to a beautiful ballroom where women in glamorous ball gowns twirl around their dancing men in uniforms and tails. I am doubly amazed at the talent of R&H and the interpretations of their music by The New York Pops.

I Enjoy Being a Girl from Flower Drum Song again gave Ms Kelly a solo where she could not only demonstrate her vocal talents but also her personality as a Broadway star.

The Sound of Music was R&H’s final collaboration. Written as a film the Prologue is described by Mr Reineke as atmospheric and with the sounds of light wind and string instruments it does draw us to a beautiful outdoor scene as the song builds to the Sound of Music again sung by Ms Kelly. Wonderful to hear Olivier winning Mary Poppins sing Maria.

Max von Essen, prior to informing us that Edelweiss was the last song Rogers and Hammerstein wrote together before Oscar’s passing, gives us his wonderful thought of being so happy to be on the stage of Carnegie Hall. The audience returns that feeling to him as he heartfully performs this classic and then asks the concert hall to join him in the chorus. A wonderful collaboration between audience and performer.

The inspirational Climb Ev’ry Mountain ends the evening with the soloists joined by the choral group to fill Carnegie Hall with hope and dreamt. The performers are thanked with a standing ovation and shame to anyone who left the hall as the applause was still going as the stage is ultimately alighted with a song not in the evening’s program. Do Re Mi has the performers on the stage and the audience sing the scales together.

Evenings like this are one night only events. Evenings like this should not be missed. The New York Pops is a local treasure; the Essential Voices USA are an amazing group of vocal harmonies and Max von Essen and Laura Michelle Kelly are performers that have talents that light up any stage.

On Friday, February 14, 2020 at 8:00 p.m., The New York Pops will be joined by guest artists Mandy Gonzalez, Carrie Manolakos, and Alex Newell for I’m Every Woman: Divas On Stage.

On March 27th Movie Night: The Scores of John Williams and the orchestra’s 37th Birthday Gala honoring Kristen and Bobby Lopez will be held April 27th.