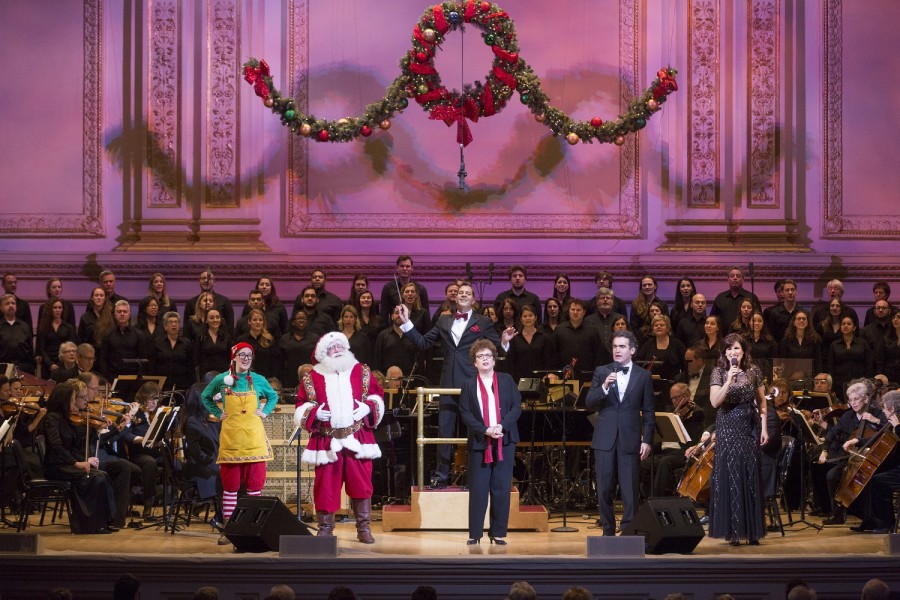 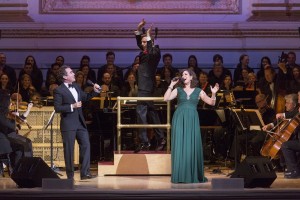 If you need a little Christmas, The New York Pops, led by Music Director Steven Reineke, is presenting an evening full of holiday cheer at Carnegie Hall’s Stern Auditorium/Perelman Stage. Tony award nominees Stephanie J. Block and Brian d’Arcy James, bring their unique takes on seasonal favorites and you still have one more night to catch this infectious spirit.

Starting off with the Carmen Dragon arrangement of “Deck The Halls” I was brought back to my childhood in California. Stephanie J. Block dressed in a gorgeous green dress brought her jazz styling’s to “It’s The Most Wonderful Time of the Year” and “ “Winter Wonderland.” Joining Ms. Block on “Let It Snow! Let It Snow! Let It Snow!” Brian d’Arcy James gave up a night at Something Rotten to share his delightful vocals with the audience. He soloed on “The Christmas Son” and “Jingle Bells.” Judith Clurman’s Essential Voices USA showed why choirs thrill with “Christmas Time Is Here” and “Angles We Have Heard on High. ”The Pops wowed with “Little Bolero Boy,” As the finale for the first act rocked the house as the whole cast sang a Holiday Hits Medley that included “All I Want For Christmas” and “Hard Candy Christmas.” Stephanie glowed in a red lace outfit that was stunning.

During intermission the buzz was even Robert De Niro is a pops fan as he was spotted in the audience.

Essential Voices USA started us off with “Merry Christmas, Merry Christmas” from “Home Alone 2.” Brian joined in with “Silver Bells.” Next was a treat both for audience members from Michigan and those who did not know Mr. d’Arcy James was also a song writer as he sang his own composition “Michigan Christmas.” Stephanie joined in the fun with “Baby, It’s Cold Outside.” Now dressed in a black glittering number Stephanie again wowed, as she shimmered. Next the Pops strutted their stuff with a rousing “Jingle Bell Rock.” Back for three numbers Ms. Block up’d the bar with each one, starting with a big band version of “I’ll Be Home For Christmas.” After “Yes, Virginia” Santa joined in the fun, along with his elf. No Christmas concert is complete with out “O Holy Night” and this was the brilliant Sandi Patti version. You know you’re a hit when your husband Sebastian Arcelus stands up and wildly applauds. To end the night A Christmas Sing-Along had the audience in the mood and ready to give thanks.

In a season where it seems Christmas is missing, this concert added back just a little bit more and my guest and I left ready for the holiday of giving, hope and joy. Thank-you New York Pops for giving that back.

The New York Pops will also perform a special holiday Family Concert on Sunday, December 20 at 3:00PM. Based on the iconic television special “A Charlie Brown Christmas,” this fully-staged concert performance brings Charlie Brown and the Peanuts to life through original choreography by director/choreographer Liza Gennaro, as performed by dancers from New York Theatre Ballet. Broadway star John Bolton will narrate. Students from TADA! Youth Theater and Essential Voices USA will help The New York Pops to bring even more holiday cheer.