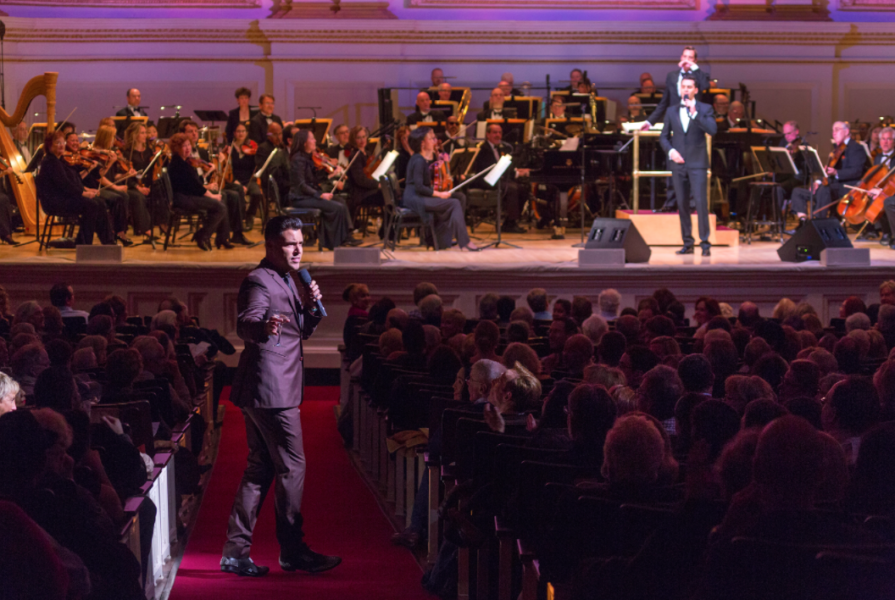 The New York Pops, Frankie Moreno and Roll Over Beethoven

The New York Pops, Frankie Moreno and Roll Over Beethoven 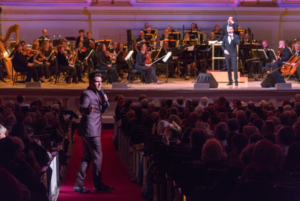 The New York Pops, led by Music Director Steven Reineke, kicks off its 2018-19 season with Roll Over Beethoven: A Different Kind of Orchestra on Friday, October 19 at 8:00 p.m. in Stern Auditorium / Perelman Stage at Carnegie Hall. The orchestra is joined by three time “Las Vegas Headliner of the Year” singer Frankie Moreno, plus band and a pair of dancers, for an evening of rock ‘n’ roll favorites by Chuck Berry, Jerry Lee Lewis, Elvis Presley, The Beatles, and others. Songs include “Great Balls of Fire,” “Jailhouse Rock,” “Eleanor Rigby,” “Bridge Over Troubled Water,” and more.

Steven Reineke is the Music Director of The New York Pops at Carnegie Hall, Principal Pops Conductor of the National Symphony Orchestra at the John F. Kennedy Center for the Performing Arts, and Principal Pops Conductor of the Houston Symphony and Toronto Symphony Orchestra. Mr. Reineke is a frequent guest conductor with The Philadelphia Orchestra and has been on the podium with the Boston Pops, The Cleveland Orchestra and the Chicago Symphony Orchestra at Ravinia. His extensive North American conducting appearances include Seattle, Edmonton andPittsburgh. As the creator of more than one hundred orchestral arrangements for the Cincinnati Pops Orchestra and the composer of symphonic and wind ensemble compositions, Mr. Reineke’s work has been performed worldwide.

A child prodigy on the piano and a gifted multi-instrumentalist, Frankie Moreno was first introduced to American audiences at the age of 10 with his debut on CBS’s Star Search. Since then, he has been named Las Vegas Headliner of the Year three times, wowing audiences from coast to coast performing his own brand of piano-pounding rock ’n’ roll.

Frankie’s performance on ABC’s Dancing with the Stars brought him into America’s living rooms again. Performing his self-penned hit “Tangerine Honey,” he has made appearances on television and magazine covers and performed sold-out concerts at such venues as Carnegie Hall, the Kennedy Center, and the Hollywood Bowl. The recipient of an Emmy Award nomination for his television special Songs at Home, Frankie also starred in a special for PBS titled Frankie Moreno in Concert.

Frankie has sold more than one million albums worldwide, and has collaborated on new music with producer, engineer, and guitar legend Pat Thrall, who has worked with artists who include Katy Perry, Christina Aguilera, Beyoncé, and Justin Bieber. Frankie’s collaboration for Sony Records with violinist Joshua Bell reached No. 1 on the Billboard charts in two separate categories. Other artists who performed on the album included Sting, Josh Groban, Chris Botti, Kristin Chenoweth, and Regina Spektor. Together, they filmed Great Performances: Live at Lincoln Center for PBS.

Frankie has toured the US with Grammy-nominated country artist Billy Currington and country superstars Sugarland. In addition, he joined Air Supply as musical director for its world tour, and wrote its recent single “Dance with Me,” which reached Billboard’s Top 40.

In addition to touring the world from Paris to Oslo and from Tokyo to Seoul, Frankie writes and produces music for other artists, and in September 2018, releases his new album, “Future Greatest Hits.” He also recently launched his new symphony show, which opened at the Kennedy Center and continued in Baltimore, Indianapolis, Houston, Omaha, Toronto, and New York.

Frankie Moreno continues to command audiences with his highly contagious music and playful stage antics. His songs are cleverly crafted and his musicianship is virtuosic. He is unquestionably a unique artist and an all-around talent who puts his heart and soul into his music.

Tickets, priced at $20 to $145, are available for purchase at the Carnegie Hall Box Office, at 57th and Seventh, or can be charged to major credit cards by calling CarnegieCharge at (212) 247-7800 or by visiting the Carnegie Hall website at carnegiehall.org.