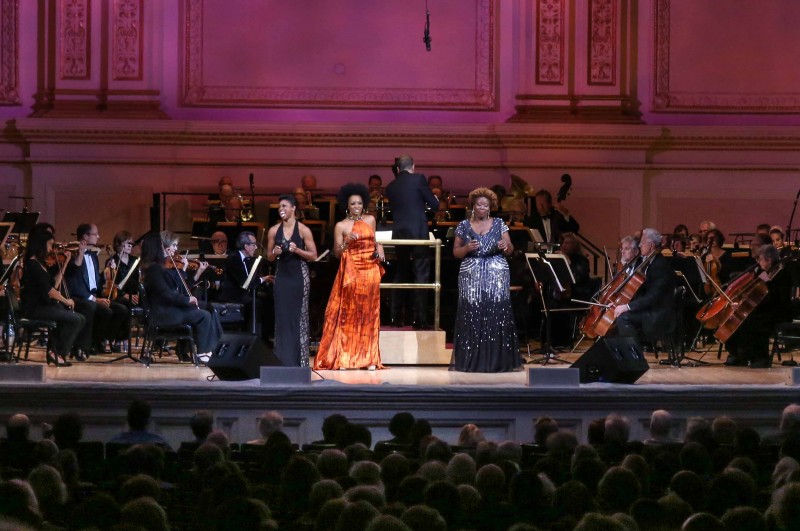 Starting out the evening this live 78-piece orchestra along with the audience sat silent in reverence and prayer for the people of France.

“Take the A Train” back in time to 1939 as The New York Pops started the evening off with the signature tune of The Duke Ellington Orchestra. With her smooth butter like tones Carpathia Jenkins “struck up the band” and had the audience a “clappin their hands.”

With a “Zas Zuh Zaz” Sy Smith proved this was no “Stormy Weather,“ as the audience sang along.

“I Can’t Give You Anything But Love” said “The Lady is a Tramp” according to the newest addition to Les MiserableMontego Glover.

Carpathia responded with ”Our Love is Here to Stay” as Ms. Smith jazzed up the standard “You Can’t Take That Away From Me.” To end the First Act Ms. Glover brought the house down with “Come Rain or Come Shine.”

Act Two Was “One O’Clock Jump(ing)” thanks to Count Basie interpreted by the fabulous New York Pops. Decked out in a gorgeous orange dress Sy Smith proved she had “Fascinating Rhythm.” As for Ms. Jenkins’ “Somethings Gotta Give” and with one of the best arrangements I have heard, Ms. Glover nailed ”The Best is Yet To Come.”

One of the most applauded numbers of the night was the Pops rendition of “Mack The Knife.” Not to be out done, with just piano Sy Smith with her bright vocals gave a bluesy heartfelt “One For My Baby (and One More for the Road).” Montego added her sould to “God Bless The Child,” but Carpatia brought down the house with her smooth and soaring “Summertime.” “Blues in the Night” and the encore “Get Happy” brought the three ladies together for a cheering ending that took the sadness out of the air, at least while the music played.

The New York Pops’ 33rd season continues on Friday, December 18th and Saturday, December 19th, at 8:00PM at Carnegie Hall with “It’s Christmas Time in the City,” featuring Tony Award nominees Stephanie J. Block and Brian d’Arcy James, as well as Essential Voices USA, led by Music Director Judith Clurman. On Sunday, December 20th at 3:00pm at Carnegie Hall, A Charlie Brown Christmas directed by Steven Reineke, The New York Pops and Broadway’s John Bolton, takes place. These concerts are sure to get you in the holiday mood.