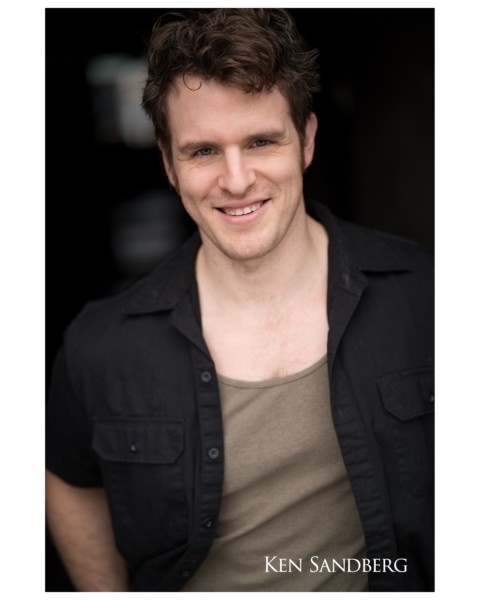 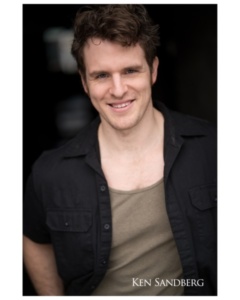 There is nothing in the world more powerful than a well told tale. They can give us hope, insight, and wisdom. They can warn us of life’s pitfalls, teach us our own history, and contextualize our existence on Earth.

For Ken Sandberg, sharing stories is his passion. I believe it is the most important and most human thing any of us can do. We tell these stories through acting, writing, music, art, dance, and a thousand other forms of expression.

Currently based in Staten Island, NY, Ken Sandberg grew up in rural Minnesota.  He was encouraged by his parents, teachers, and friends to explore all kinds of creative outlets: reading, writing, acting, music, and even board games.  Some of his earliest writings were overly complex storylines for Dungeons & Dragons campaigns.

Throughout his youth Ken appeared onstage as an actor, wrote music, played in bands, and began writing short stories, poems, and plays.  Knowing that his small midwestern town would not be the best place to pursue his passion for the performing arts, he moved to the East Coast, landing first in New York City and later Philadelphia.

While living in Philadelphia he co-wrote the book and composed the score for Zombie! The Musical, which won the 2009 Spark Festival’s Hotel Obligado Audience Choice Award for New Work and was honored with Best of the Fest in the 2009 Philadelphia Fringe.

As an actor, Ken has toured the country, and worked with theaters including Quintessence Theatre Group, Kansas City Repertory Theatre, Door Shakespeare, The Heart of America Shakespeare Festival, Arden Theatre Company, and Coterie Theater. He’s played roles ranging from Antony in Antony and Cleopatra to the hapless troll Wartag in The Secret of Courage.

Ken holds a BA in Theatre from Temple University where he also studied creative writing, a Certificate in Musical Theatre Performance from The American Musical and Dramatic Academy and most recently earned his MFA in Acting and Directing from The University of Missouri – Kansas City.

His childhood love of epic mythology and legendary heroes became the basis for Ken’s latest work, The Death of…, a solo show in which he looks at the importance of our own heroes, our need to tell their stories, and how we cope when they fail us.

Mr. Sandberg can currently be seen in the Savane print advertising campaign, as well as The Avenue, with Brian Vernick and Gina Martino, available on Amazon, by clicking here.  Or, catch me in the thriller The Barren Pine, here. 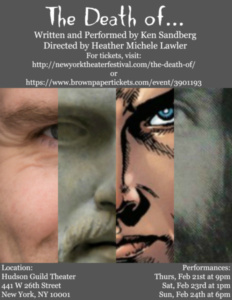 Rehearsals have begun for The Death of…  Heather Michele Lawler is directing the piece.

For more information on what Ken is up to, visit his website, www.ken-sandberg.com where you can also find links to his social media pages.  Information on director Heather Michele Lawler can be found at https://www.heather-michele-lawler.com/