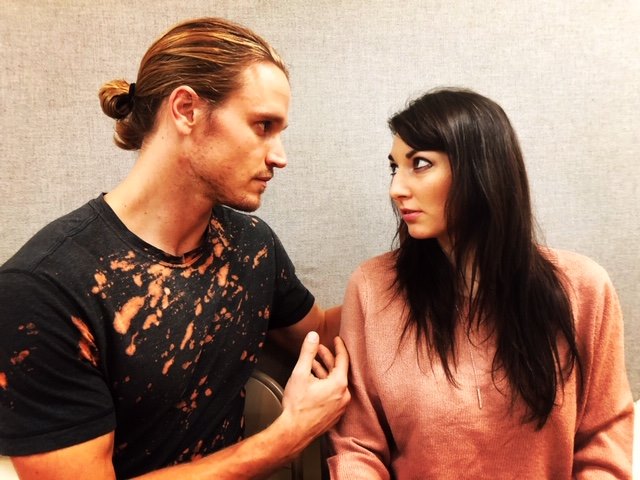 Rori Nogee’s Aftershocks at the NY Winterfest is well written and deals with a subject that is rarely dealt with in a real context. It is a hard show to take because it is so brutally honest, much like Veronica’s Room or Blackbird. Aftershocks reminds me of the Natalie Portman film “Closer”.

We first meet Angie (Rori Nogee) at a strip club giving a lap dance to Jimmy a regular customer (Troy Acree). As he departs Elliot enters (Trevor Van Uden), who only wants to talk and does not want to be touched. Angie is stunned by this behavior and tells Ben (Frank Winters) the man who loves her, but whom she only sees as a friend with benefits. Elliot returns and the two get to know each other without touching. On one occasion Jimmy bursts in and demands a dance with Angie and threatens her. Elliot goes ballistic, almost killing him. As Angie and Elliot grow closer we learn that Angie had been raped in college. After her boyfriend Kyle (Eric Graves) dumped her she felt worthless and became what we see today. Elliot was also raped from the ages of 9 – 15 and can not be touched. He lives with night terrors and more. Despite her love for Elliot, one fateful night Angie is forced to leave. Time goes by and Angie is engaged to Ben. On her birthday Elliot arrives with his new girlfriend Bethany (Szalene Anthony) and suddenly he can kiss and touch, which drives Angie insane. Their chemistry is still intact and nothing will ever be the same again.

To give much more of the plot away would be to spoil the effects. Needless to say for the first time I was caught off guard.

The cast lead by the playwright was believable, each having a moment to shine. This non-equity cast stepped up to the bar and I give director Justine Lambert the credit for that.

The lighting by Joe D’Emilo was well done.

Ms. Nogee is a playwright and an actress to watch. She understands dialogue and her description of how different people react to abuse is dead on. No one really ever states with accuracy the long term effect abuse can have on an individual and how each person reacts. No two act the same. In Aftershocks we get two contrasting reactions and both are sadly valid. If you have been abused this play may be extremely hard for you to take. The sexual content is explicated, but this is a worthy play if you can handle it and I recommend it highly. 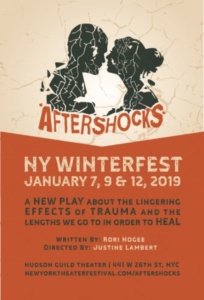