The Noble Family: New Musical Coming To The Cutting Room 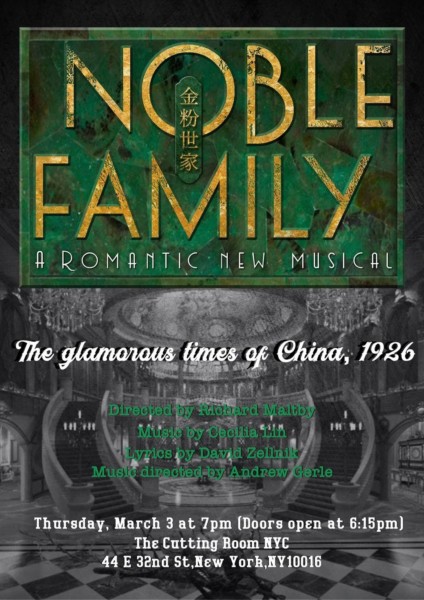 The Noble Family: New Musical Coming To The Cutting Room

The Noble Family is a romantic new  musical by Chinese-born composer Cecilia Lin (Four-time China Music Award winner) and lyricist David Zellnik (Yank!) under the direction of Tony winner Richard Maltby, musically directed by Andrew Gerle, featuring an all-star Broadway cast. This show is set to open both New York and Beijing in 2022!

The story started at the peak of this family’s prosperity, with a grand house, countless servants, and their sons and daughters spending money like water from a faucet. It ends with the house becoming an empty lifeless ruin. The “noble” family in Beijing, are powerful and wealthy. The action takes place over the period of one year. It’s not an ordinary year, it’s one of the years between the end of Qing Dynasty and the beginning of P.R.China. The show touches on the assimilation between the new and the old ways of thinking. Between traditional Chinese and western cultures, farming and industrial thought frames, people who swarm to new worlds and who cling to the old. The drastic changes of the time forces people to face the changes. This noble family has to face it too.

Follow Jin Yanxi, on of the sons as he falls in love with a girl named Leng Qingqiu, who comes from a poor but scholarly background. They continue to date even though the difference in their respective social statuses prevents them from being together. Bai Xiuzhu, a girl from another affluent family, also falls in love with Yanxi, who rejects her and goes on to marry Qingqiu. However, Yanxi’s restlessness, spoilt personality and boredom of life after marriage prompts him to have an extramarital affair with Xiuzhu. He eventually becomes distant from Qingqiu and plans on leaving her and his newborn son so that he can accompany Xiuzhu to Germany.

When the house in which Qingqiu and his son lives catches fire, Yanxi, who couldn’t find them, believes his wife and son have died and collapses in sorrow and regret. After the fire, Yanxi receives a final letter from Xiuzhu saying she has left for Germany without him, to marry someone else. Yanxi leaves for the train station and imagines himself finding Qingqiu and hugging her. Unbeknownst to Yanxi, Qingqiu and their son actually survived the fire and is actually near him on a southbound train. Yanxi boards a train heading in the opposite direction after seeing that there is nothing left for him at home (his family is breaking up since his father had been robbed of his wealth and had died). The once loving couple now part ways and is unknown whether they will ever reunite.

You can enjoy songs from this brand new musical based on a bestselling Chinese novel and TV series on March 3rd at 7pm at The Cutting Room, 44 East 32nd Street. Let the magic of music bring you back to the fascinating age of China in 1926.