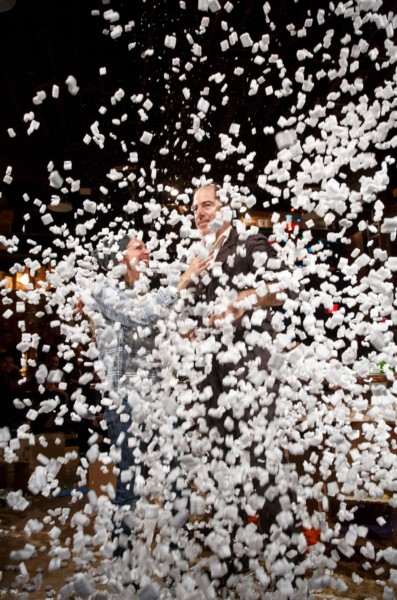 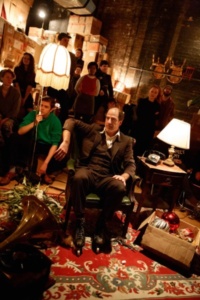 A dedicated absurdist, I am chiefly interested in moments of “the sublime ridiculous.” Geoff Sobelle

There is a vast difference from a play and performance art. The Object Lesson, at New York Theater Workshop, is definitely the later. I have never been more bored and unentertained in my life. If I wanted to go to a garage sale and rummage around on an icy slippery day, I would have done so and at least come home with treasures. Instead I was lead into NY Theatre’s space, now filled with clutter and hordes of boxes. The scenic installation designed by Steven Dufala is actually quite ingenious. The audience goes in blind and thankfully, I figured out that seating was at a premium and found what I thought would be a comfy couch. Actually it was slippery, but at least I didn’t have to sit on a box or a cushion on the floor. For about the first 20 minutes people are encouraged to go through the debris and decipher who lives here.

Finally we meet Geoff Sobelle who is rather distant. He sets up house from boxes that have hidden objects in them and then talks into a phone. The phone calls back and he uses what he just said to create a second conversation. Clever at first, but it repeats and as everything in this show goes on for way too long.

Basically this piece is five vignettes, which don’t tie together, so a storyline is next to impossible. 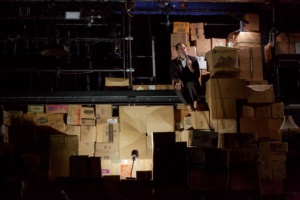 The next sequence involves Mr. Sobelle climbing the Mount Everest of junk piles to get to the top. My guest murmured; I hope the theatre has great insurance. Now that was funny. Once in the rafter’s he unpacks and delivers some story about his past. We’re suppose to care, but he hasn’t earned that right. He flings carelessly any item he touches as if they mean nothing. If that is the case then he does not understand hoarding. Hoarders know where every item is, they physically sweat not to have the items where they placed them. 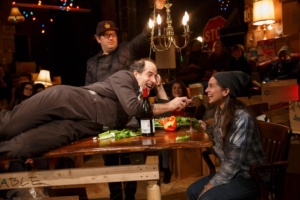 The next part was actually highly inventive, Mr. Sobelle courts an audience member in ice skates and then makes her salad chopping the lettuce and carrots with his skates, then launches into a tap dance on the table. Again this goes on a little too long. By the end I felt as if I was watching Gallagher. 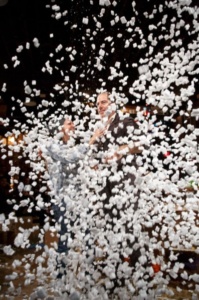 The next sequence involved two audience members, who read items out of a box in a microphone. It was like watching paint dry. By this point I pulled out my phone to count down the minutes. 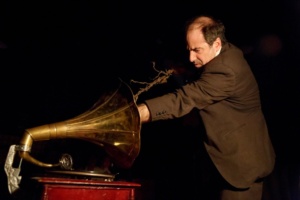 The last piece has Mr. Sobelle unpacking a bottomless box where his life is shown from the present to the past, all the way back to birth, forward to death and then trying to unearth what looked like an electrical tree of life’s roots. However before he does that another of those self to self phone calls. Finally the show ends.

Mr. Sobelle has cat like athleticism, is part clown and part magician. How that box got packed is beyond me and I did try to figure it out.

The lighting designer Christopher Kuhl and sound designer Nick Kourtides did excellent work as did the clean up crew.

I have never liked clown acts. Gallagher appalled me and I definitely do not like performance art. I know some people do, but this is and was not my cup of tea. In all honestly I just do not get the point.