The Other Josh Cohen a Relatable, Delightful Night Out

The Other Josh Cohen a Relatable, Delightful Night Out

In Josh Cohen’s family tree “And they all found love/Except me.” 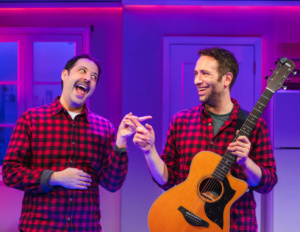 You know you are having a really bad day, week, month when you come home to find your apartment has been robbed and all you’ve been left is a Neil Diamond III CD. This is tragic because all the good songs are on volumes I and II. Josh Cohen has not only had his apartment ransacked, but he is broke, single and Valentine’s Day is just around the corner. This musical has been gathering laughter and sympathy pains since 2012 and has been given a new uptown space at the Westside Theatre to continue it’s journey. 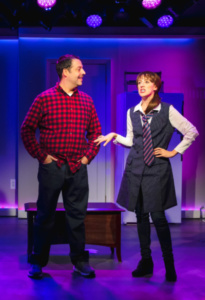 The show begins before it ever officially starts, with the robber clearing out Josh’s stuff. We learn from Josh Cohen present (David Rossmer) that Josh Cohen (Steve Rosen) from the past, that things will end up swell, but until then Josh still has a long way to go in his tale of his ironically depressing life. Josh past, is an overweight loser, with a bad mustache. Josh present has definitely spiffed up. As the two Josh’s banter we meet ex-girl friend’s, his mother, Mr. Diamond, sister, his benefactor and more all played by the fabulous Kate Wetherhead. The rest of the 52 characters are played by this band (Luke Darnell, Hannah Elless, Louis Tucci and Elizabeth Nestlerode), who are also actors. 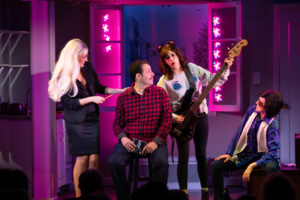 When Josh does get a date for Valentine’s Day, it’s only because the girl’s boyfriend is in prison, but even that turns out not to be. Every women Josh gets with, ends up telling him how he is unworthy of her love. This is beyond sad, as all Josh really seems to want is to be attached. 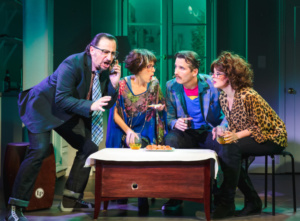 When a  $56,000 check arrives unexpectedly in the mail Josh, not trusting in this stroke of good luck, seeks to justify where it belongs. When he learns from the original sender it belongs to her son only a few blocks away, he seeks to return it. His reward love, making sure all good deeds do not go unpunished and for every mensch there is a bride. 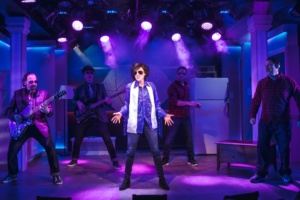 Kate Wetherhead is a standout as are the two Josh’s, who are also the the composer, lyricist and book writers. For that matter the whole cast is a well rounded troupe of chameleons. 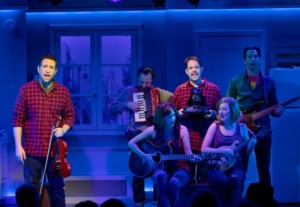 The Company of The Other Josh Cohen photo credit: Caitlin McNaney

Hunter Foster’s hones this piece in and gives it a delightful spin on a story many of us have gone through, minus the check.  Though scrappy and tongue and check you will find yourself chuckling more than once. Nicole V. Moody’s costume designs have just enough chutzpah, what with her Darth Vader and Neil Dimond attire.

The Other Josh Cohen should be kvelling with pride