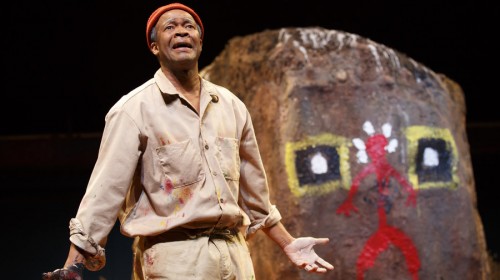 The Painted Rocks at Revolver Creek The Eyes Have it

The Painted Rocks at Revolver Creek The Eyes Have it

Athol Fugard ‘s new play The Painted Rocks at Revolver Creek makes little sense and at the performance I saw was unprofessional.

The first act takes place in 1981 on a Sunday morning, as 11-year-old Bokkie (Caleb McLaughlin) and Nukain (Leon Addison Brown), an old farmworker, create and paint the rocks on the land where they work in South Africa. The two talk about how Nukain has painted flowers, yet there is not one rock painted as a flower. In tribal array yes, but not one flower. The last rock has been left as the monument to Nukain’s demise. He knows once it is painted that his life will expire. He has been reticent to paint it. Finally he paints his story and explains to his young charge, “They got eyes but they do not see us.” When the owner of the farm Elmarie (Bianca Amato) sees what he has painted, she becomes fearful and insists that Nukain wash it away and paint a flower. Bookie, insists that this is his story and it stays. He is told he has lied and should be punished. Bookie furious throws the gift of food in the dirt.

In act two, it is 2003. Time and weather have worn away much of Nukain’s work. Bookie returns now named Jonathan (Yagel T. Welch) to restore the garden. Here is where the show for me became unprofessional. Mr. Welch was put into the show on Friday due to an illness. Here it was Tuesday and he had book in hand. Had I not started off as an actress, I would have thought ok, however I was put into three shows with a less than 4 days to learn lines and they were learned as well as dance routines and musical numbers. The actor literally had script in hand. Another problem here is I know very little about apartheid, so black people brutally massacring white people to me is inhuman. For that matter anyone massacring anyone is unforgivable. It is hard to have sympathy for that. Violence of any kind is inexcusable. Elmarie, not knowing who Jonathan is points a gun at him. Farmers are being brutally attacked and killed. Apartheid has ended, but widespread anger remains over redistribution of the land. Elmarie and Jonathan come to see each other with new eyes.

Mr. Brown and Mr. McLaughlin bring an energy and warmth, but it is hard to understand their words under the heavy South African accents. The night I attended a large portion of the audience left after the first act due to this problem. Ms. Amato goes through the most amount of changes as she is forced to deal with a world that has left her nothing. It is hard to judge Mr. Welch with a book in his hand. Fugard or set designer Christopher H. Barrerca need to come to an understanding. The set had NO flowers, however if this is based on the rock gardens by Nukain Mabusa the set designer has the right look and Fugard needs to explain how these are flowers. It was stated that this was not based on Mabusa’s life, however his life is far more interesting than this play.

G. H. HARDINGJanuary 17, 2022
Read More
Scroll for more
Tap
God is Anemic in An Act of God
Get Ready for an Exciting Belmont Stakes