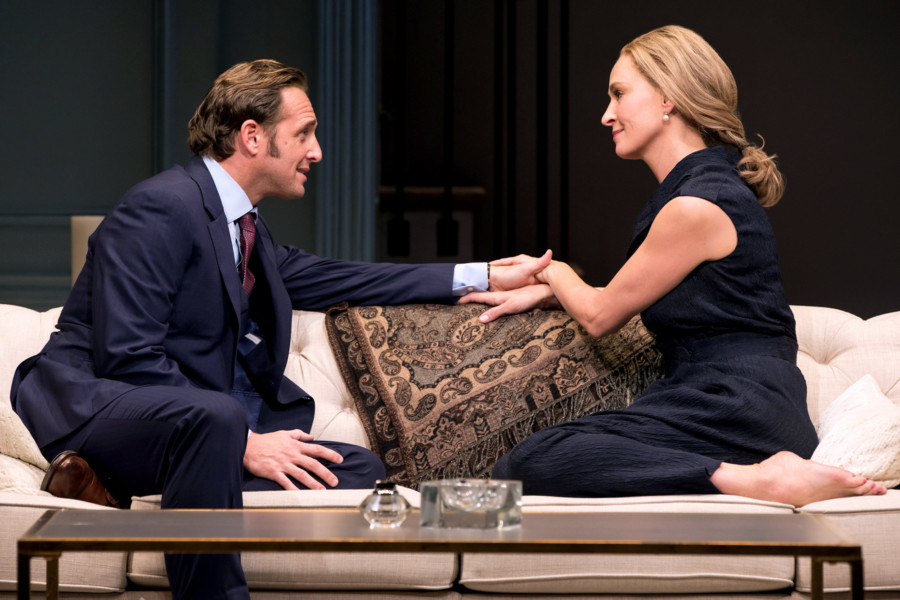 The Parisian Woman or Trump Bashing on Broadway

The Parisian Woman or Trump Bashing on Broadway

“Presidents are assets, to be bought, sold and managed.” The Parisian Woman.

It’s bad enough that no matter where you turn the president, like it or not, is being belittled and used as fodder, but now he is being used to elicit laughs in a play that has little to say. Beau Willimon’s (House of Cards) The Parisian Woman is set in Washington DC, among the wheeling and dealings of the morally bankrupt. This adaptation of Henry Becque’s 1885 play La Parisienne was written by Willimon’s in 2013, but Willimon’s rewrote it after the 2016 election to obviously get the angst off his chest. 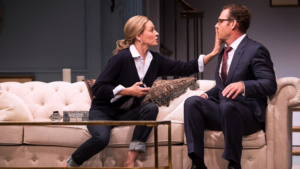 Chloe, the rather beautiful Uma Thurman, is in the throes of an affair with Peter (Marton Csokas), a banker with a direct line to the Oval Office, when her husband Tom (Josh Lucas), a tax attorney with political ambitions, arrives. All is not as it seems. Chloe and Tom have an open marriage and Chloe has been using Peter to get Tom a judgeship. Tom, who is unqualified, wants a lifetime appointment to the fourth circuit court of appeals, but as Tom puts it “experience don’t particularly matter anymore.” 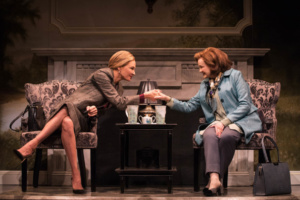 At Jeanette’s (Blair Brown), the newly appointed chair of the Federal Reserve, dinner party, Chloe tries to schmooze members of the administration on Tom’s behalf. To keep things in the present; the president’s Twitter habits, Ivanka, General Kelly, and General Mattis are casually used as tidbits for amusement. Jeanette’s liberal, Ivy-educated, being-groomed-for-the-white-house daughter, Rebecca (Hamilton’s Phillipa Soo), irks and makes her mother proud, that is until secrets are revealed. 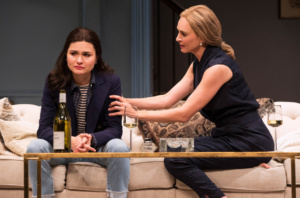 The cast is terrific in their roles, with Thurman making an impressive Broadway debut. She fills the stage for 90 minutes with a definite “it” factor. Her Chloe becomes more and more layered and complex as the show progresses. We completely buy her obsession with her husband’s rise to power and the role she feels she needs to play. When the scene between her and the fabulous understated Blair Brown happens, we are taken back at the protective viper Chloe really is. Josh Lucas also gets a chance to shine, as the all smiling politician who shows his colors when the chips are down. I especially liked Marton Csokas performance, as the lovesick but corrupt player who can’t take no for an answer.

Pam MacKinnon’s direction keeps us in the throes of this piece. She unveils the political landscape as a rollercoaster of twists and turns, landing in a purgatory of a continuing saga.

The only thought I had after watching The Parisian Woman and having watched “House of Cards” was what is Willimon’s trying to tell us, or his wife, about fidelity? He must have one complicated sex life.