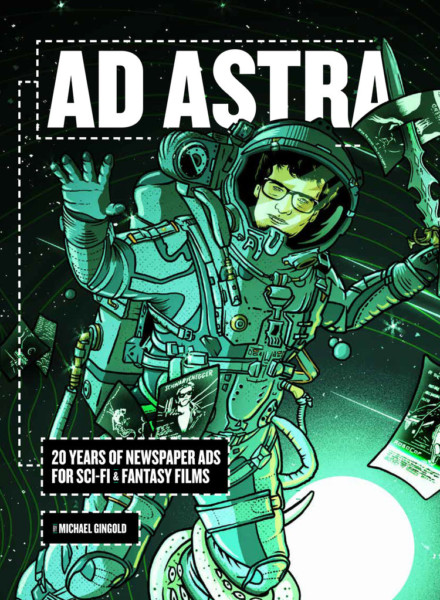 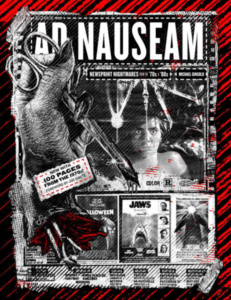 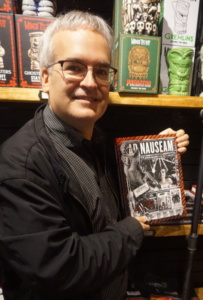 Growing up in the 1970s and ‘80s, author/collector Michael Gingold became obsessed with horror movies and other genre films. This love led him to become a Fangoria writer and then its editor for nearly 30 years, as well as a Rue Morgue contributor. He made that magazine the leading chronicle of all things horror/supernatural and more covering film, television and books for decades. 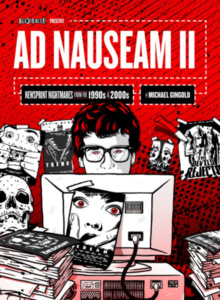 Before all that, he took his scissors to local newspapers, collecting countless ads for these movies. Gingold first began reproducing newspaper ads for ‘80s horror films in the pages of his Xerox fanzine “Scareaphanalia,” which he wrote and self-published for nearly a decade. While still in college, he began contributing capsule reviews to the annual book “Movies on TV” and “Videocassette,” and later did the same for “The Blockbuster Video Guide.” He also wrote full-length reviews for CineBooks’ annual “The Motion Picture Guide,” many of which now appear at the TV Guide on-line movie database.

So, when the 50-something hooked out with Matthew Chojnacki from 1984 Publishing, a genre book publisher, they organized a museum-worth of these ads as a visual history and graphic narrative of every kind of horror film, flick and movie.

Now, hundreds of pages of film ads from the last four decades (since the ’70s), these ads are spread throughout various editions. And the latest also includes a new foreword by legendary director Joe Dante.
First came “Ad Nauseam: Newsprint Nightmares from the 1980s,” which has more than 600 ads packed in the updated version. Rare alternate ad art for film franchises such as “Halloween,” “Friday the 13th,” “A Nightmare on Elm Street,” “Child’s Play,” “Jaws,” “The Texas Chain Saw Massacre,” and “The Exorcist” can be found in there.This book revels in oddities including “Invasion of the Blood Farmers,” “The Incredible Torture Show,” “Psycho from Texas,” “Dracula Blows His Cool,” “Zombie Island Massacre” and many more.This year-by-year deep dive into the Gingold archive led to “Ad Nauseam: Newsprint Nightmares from the 1970s and 1980s,” which was issued with more than 450 ads. Within these pages is the art for such films as “Gremlins,” “The Blob” remake, and many horror franchises. Oddities from such flicks as “Psycho from Texas,” “Dracula Blows His Cool,” “Blood Hook,” “Zombie Island Massacre” are among its pages as well.  Gingold then compiled “Ad Nauseam Newsprint Nightmares from the 1990s & 2000s”” out of his collection of newsprint notices from those decades.
There are more than 500 striking ads for the big-budget gothics of the early and mid-’90s (“Bram Stoker’s Dracula,” “Interview with the Vampire”), the slasher-film revival (“Scream,” “I Know What You Did Last Summer,” “Halloween: H20”), gruesome franchises (“Saw,” “Final Destination”), remakes (“The Texas Chainsaw Massacre,” “Dawn of the Dead,” “The Ring”), found-footage films (“The Blair Witch Project,” “Paranormal Activity”) and so on. This volume also includes unforgettable critic quotes of the time, fascinating facts about the films’ releases, and insightful commentary.