The Personal Property of Bernie Taupin Goes Up For Auction

The Personal Property of Bernie Taupin Goes Up For Auction 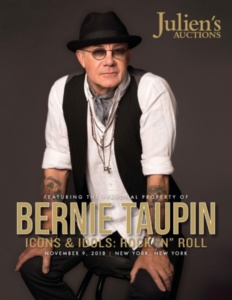 A little more than a week before The Personal Property of Bernie Taupin auction takes place November 9 live at Hard Rock Café in New York and online at juliensauctions.com, Bernie Taupin, the legendary songwriter, pens his thoughts and reflections of his fabled five decade collaboration with Sir Elton John, who’s embarking on his final world tour, and the impact of his lyrics to their iconic classic hit songs many of which will be sold at auction for the first time by Julien’s Auctions.

Taupin’s auction catalogue will feature memorabilia, western ephemera and original, annotated lyrics to some of his classic creations including “Candle in The Wind 1997” tribute to Princess Diana, “I’m Still Standing,” “We Built This City,” “These Dreams,” “Nikita,” “Mendocino County Line,” “A Love that Will Never Grow Old,” and “Empty Garden (Hey Hey Johnny)” as well as one-of-a-kind handwritten lyrics with hand-drawn interpretative Artwork signed by Bernie Taupin featuring his lyrics to classics such as, “Yellow Brick Road,” “Daniel,” “Rocket Man,” “Bennie and The Jets,” and more. A portion of the sale proceeds will benefit The Elton John AIDS Foundation and The Wounded Warrior Project.

As Elton embarks on his final world tour, I’ve been presented with many opportunities to reflect on our musical career. We celebrated our creative partnership at a gala in Los Angeles in 2017, I joined him for his last weekend during his final La Vegas performances, we’ve co-hosted a YouTube contest where other artists reinterpreted our songs visually, we were honored with a CBS Grammy Salute presentation, and we both executive produced two new albums with covers of some of our biggest hits sung by other artists.

I am often asked how I feel about our biggest hits – how do I interpret them today as I reflect on the last 50 years of my professional life? As the tour has begun, I am more overwhelmed than ever before by the sell-out crowds singing along to every song.

Fans share often that my lyrics and Elton’s melodies have shaped and changed their lives in dramatic, everlasting ways. How can I possibly express my gratitude to the millions of fans who have impacted my life? Your love and loyalty has meant everything…