The Phantom of The Opera Still Going Strong

The Phantom of The Opera Still Going Strong 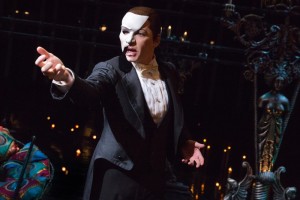 James Barbour as the Phantom

My power over you grows stronger yet

And though you turn from me to glance behind

The Phantom of the Opera is there 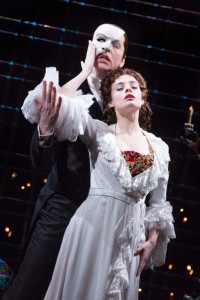 The Phantom of the Opera has grossed more than $890 million on Broadway, with a 5.6 billion dollar take world-wide. It earned seven Tony Awards and for over two decades has been drawing in audiences, who thrill to every nuance. The longest running show on Broadway opened in 1988 to rave reviews. I have not revisited this show since 1990 and yet this lush material is still as fresh and exciting, if not even more alive with James Barbour’s beautiful voice and powerful acting filling the stage. He was born to play this role.

For those who do not know the story The Phantom of the Opera takes place within the majesty and splendor of the Paris Opera House sometime around the turn of the century. In terror the opera house is run by the phantom, who haunts and keeps the owners and the company fearful of his every move. Trouble truly begins when the Phantom threatens the lead soprano Carlotta. He wants the diva to resign, so his protégé, Christine Daaé can become the star of the opera. Known to Christine as the “Angel of Music” she thinks her deceased father sent him to her to console her.

When Christine falls in love with an old flame, Raoul, the Phantom’s all-consuming love for her unravels them both. This story of seduction, romance, revenge and unrequited love captures the hearts of all who watch this heartbreaking tale.

Barbour’s performance as the Phantom is emotionally layered. His insecurity is so tragically masked that when the invisible mask he also wears slides away, we see the man who longs for acceptance. It is a complex performance enhanced with a voice that is God given. His statue also adds another dimension with a chilling emotional impact. When he is showcased at the Majestic Theatre in the rafters, looming like a gargoyle emitting glorious angelic tones. Barbour who has such control over his voice that after singing note after note fortissimo, effortlessly sings pianissimo to transport you to heavenly realms.

As the dancer-turned-soubrette-soprano Christine, Julia Udine singing and acting is unimpeachable. Her transition from the opening sequence as a nervous girl, to the powerful woman she becomes is a convincing transition. I admired her stamina as she made Christine, so much more.

As Raoul, Jeremy Hays is the perfect foil to Barbour’s Phantom. This role has always struck me as just a pretty face and Hays fits that perfectly.

As the haughty diva Carlotta, Michele McConnell takes no punches and makes her a stronger adversary.

Who I did not find up to par was Christian Šebek as the overstuffed principal tenor Pianigi. I found his voice strident and unappealing.

As for the minor roles, every cast member was a pleasure to watch and listen to.

Andrew Lloyd Webber’s music has lost none of its epic sweeping melodies. The 26-member orchestra under the baton of David Caddick with new amplification system by Mick Potter, has the show sounding to perfection. It is clear, crisp and highly fulfilling. The sumptuous elements (set and costumes by the late Maria Björnson, lights by Andrew Bridge, choreography by the fabulous Gillian Lynne) surpass most shows on Broadway. In seeing this again, there is no doubt in my mind that if it were to be nominated again, it would win all the awards it won the first time. The special effects which include the grotto, the infamous chandelier, the flying flames are still spectacular and awe inspiring and still hold up 26 years later. Like the song

Touch me, trust me, savour each sensation

Let the dream begin, let your darker side give in

To the power of the music that I write

The power of the music of the night