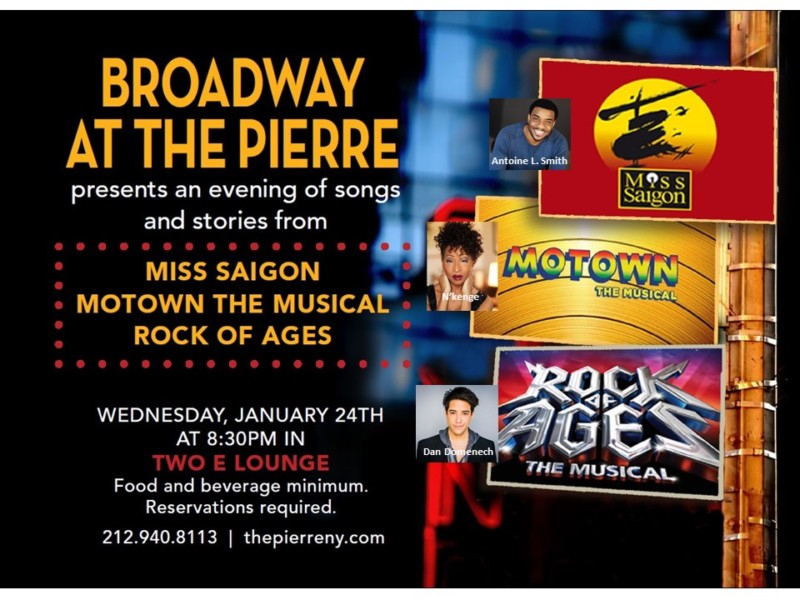 The Pierre Hotel Celebrates with the Best Of Broadway

The Pierre Hotel Celebrates with the Best Of Broadway 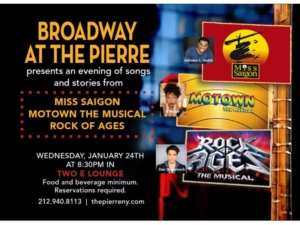 Broadway at the Pierre Hotel

The Pierre New York is bringing the best of Broadway to guests and local residents alike with its popular new cabaret series, Broadway At The Pierre. On Wednesday January 24th, the hotel is teaming up with award-winning Broadway Sings For Pride creative director Neal Bennington for a special evening with some of Broadway’s brightest stars.

“We are proud to continue The Pierre’s rich and long tradition of providing premiere entertainment for our guests and neighbors,” said General Manager Francois-Olivier Luiggi. “Broadway At The Pierre gives fans the opportunity to spend an evening with some of musical theater’s brightest stars in an intimate setting. The response that we have received to the series so far has been fantastic.”

Upcoming Broadway At The Pierre shows will feature cast members from School of Rock (March 21st) and Disney’s Aladdin (April TBD). February’s show will be announced on January 31st.

Antoine L. Smith, currently in rehearsals for the upcoming revival of Carousel, just completed a run in Miss Saigon. His additional Broadway credits include The Color Purple (revival) and Memphis. National Tours: Rodgers and Hammerstein’s Cinderella (first Broadway national production) and CATS. Antoine is also an Emmy Award winner for Best Musical Performance on a Daytime Program (The Today Show).

N’Kenge, is an international award-winning singer who was called “electrifying” by the New York Post in the role of Mary Wells that she originated in Broadway’s Motown: The Musical. Motown founder Berry Gordy describes her as “the most versatile artist I know.” Her regional credits include Chicago, Aida and Little Shop of Horrors. N’Kenge made her Broadway debut in Sondheim on Sondheim and has also headlined solo engagements at New York’s Carnegie Hall and Lincoln Center as well as the Library of Congress in Washington, DC.

Dan Domenech is best known for playing Drew in Broadway’s Rock of Ages and a recurring guest role on the TV series Glee (Chase Madison). His off-Broadway and regional credits include Heathers: The Musical, Kinky Boots, Disney’s Aladdin (Aladdin) and Evita (Che). Dan has also served as an associate choreographer for movies and TV including Step Brothers (film),Semi-Pro, Fame (2009 film) and the music video for Adele’s Chasing Pavements which earned a 2008 MTV Video Music Award nomination for Best Choreography. Dan began his acting career as part of the cast of Rent, touring with the musical from 2002 to 2006.

Originally the Gentlemen’s Library when The Pierre opened in 1930, Two E Bar & Lounge has become one of the hotel’s most beloved venues. Its coveted traditional Afternoon Tea menu is created by a full in-house pastry team. At night, Two E transforms into a stylish bar that serves up handcrafted cocktails complemented by small plates, with live jazz on Thursday, Friday and Saturday evenings. A Neo-Classical lounge, Two E was designed to reflect a chic Upper East Side residence. http://www.thepierreny.com/dining/twoebar/

Broadway Sings For Pride is a non-for-profit charitable organization which brings together Broadway talent, activists and celebrities to promote LGBT equality through song, public education and raising awareness of the needs of LGBTQ youth. Founded in 2011 in response to the tragic suicides within the LGBT community, Broadway Sings for Pride has raised thousands for the Hetrick-Martin Institute and The Lesbian, Gay, Bisexual & Transgender Community Center of New York City. The annual concert series features some of the brightest stars in entertainment. Supporters have included Channing Tatum, Jesse Tyler Ferguson, Bryan Cranston, Tim Gunn, Carol Channing, Neil Patrick Harris, Bernadette Peters and Nathan Lane. Broadway Sings for Pride is a sponsored project of Fractured Atlas, a non-profit arts service organization. The series has been featured in E! Online, The Huffington Post, CBS Morning News, Playbill, Time Out New York, The Advocate and more.

Neal Bennington is the award-winning founder and creative director of NealB.tv and Broadway Sings for Pride. He has worked in front and behind the scenes in the entertainment industry. Neal’s credits include: The Wendy Williams Show (guest correspondent), The Real Housewives of New York City (celebrity interviewer), RTL Germany and New York City’s Eyewitness News/ABC-7. He is currently working on Broadway Sings For Pride’s 8th annual pride show coming in June 2018. http://broadwaysingsforpride.com/

Genevieve Rafter KeddyMay 21, 2022
Read More
Scroll for more
Tap
He Says: The Mint’s Hindle Wakes Fanny, Can’t Wait Til You Get the Vote!
Debut of Dark and Intriguing New Play at Plays and Players Theatre